I was so excited to update you people about the Singapore Idol that I went last night. However, I was too tired and I had to prepare for today's Teacher's day performance! So let's update about yesterday, Wednesday,30/08/06. 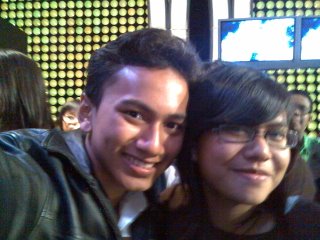 I went there by taxi. It was cheap, about eleven dollars. When I reached there, some of my familiar schoolmates were there so I got company! So after some time, more people came. So then, we got in, I was the first to get in and the most enthusiastic one. Trust me, I was like screaming all the way and keep on fidgeting. Then I think I was partially "melted" not because of anything but I am just too excited. Last minute ticket, one hour fun. So, I watched what I watched. Except that I watched it LIVE on TV and I got Hady's autograph ! Haaha ! Ok. Let's stop about Singapore Idol, Joakim is out anyway. Awww...

Ok next thing is regarding my performace this morning in the school hall. I don't know why, but I don't fell nervous till now. Certain things I am immune already I think which is insults,scoldings, and nervousness. So, I am quite worried though if my voice will be like off-pitch. But this performace, I was so freaking confident to move. Haaha. So long as I am not over-confident, I'm fine am I right ? So I sang Sway by Michael Buble. I think everything was fine except for one part I went off-beat. I sang faster than the song. Which shouldn't be happening ! So, I was professional (riigghht) and continued singing. After school, when people were dismissed, the song Sway stucked in everyone's head. They go like "When marimba rythm starts to play.." whenever I walked pass them. So I was like "Heck uh."

After school, I went to my primary school, PRPS. I saw my long lost friends like Mas,Farhan and Haziq etc. I have not contacted them and I remembered their names. Coolness ! So we took a photograph. 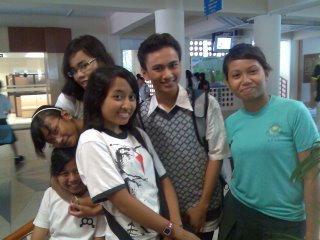 So we talked, chat and stuffs.So after that I went home. Too tired. Exhausted. I slept.

Ok, I would like to wish the teacher's a Happy Teacher's Day. Have a nice week ahead !