Argh... Butterflies in my stomach. I was looking through the calendar to see what's today's date and it is 28th October and the 'O' Level is on the edge of time. Anyway, today's outing was fun as usual. The gassy drinks, crackers and cookies. But the most fun part was when the bling comes in.

First house we visited was my uncle's house. We gathered there before the outing really started. My uncle who came back from Indonesia for Eid, tried to hypnotize me but somehow for lack of my concentration I just can't be hypnotized but my cousin really got hypnotised. My uncle is a hypnotherapist by the way. So proud to have a hypnotherapist in our family.

So here goes. My uncle offered me some help so that I could be more confident and motivated. So, I thought, why not? This would be fun or at least productive. He asked me, what do I want to achieve at the end of the therapy? So I said I wanted to be more motivated and confident because as a student who will be sitting for his 'O' Levels soon, the last thing he wants is a low morale. We went into my cousins room. My mum, cousins and my aunt came in to witness the hypnotherapy. I don't really mind but I think that's the reason I lost my concentration - with everyone looking at me. He started when I was ready.

"Stare into this ring... Close your eyes... Now imagine..." When the imaginary part came about, it's like nothing is working. So, when I woke up from the therapy, they asked me what's my mother's name and do I feel pain when being poked. So, I told the truth. I said my mother's name and I do feel a little pain when being poked. Clearly, it's not working on me because I was very, very concious. Here's what happened to my cousin.
My cousin went to try it. My uncle hypnotherapied him. And surprisingly, he came out of the room hypnotized. My uncle asked my cousin "That's your dad, what's his name?" and my cousin replied "Michael Jackson". And everybody laughed. "What colour is he wearing?" "Brown" he said while my uncle is in fact wearing yellow! So, the next test goes like this while he was sub-conscious "Now, forget number six." And when he counted one to ten, he was stuck at five. Somehow a shiver went down my spine. And when my uncle tried to return him back to the "real-world", he got a little problem but in the end he succeed. It is not as easy as I thought. I'll probably meet my uncle again soon to try that again. I'd love to see something positive coming out from hypnotherapy. I have a video of my cousin being hypnotized. So, wait for the next entry, I'll put up the video. 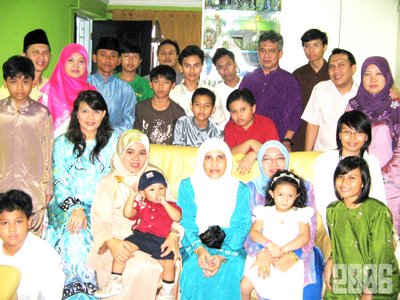 That's the highlight for today. I need to prepare for my exam. So, I cannot write a long entry today until the party ends. But, it will still be updated though.
COME TO MY PARTY GUYS !