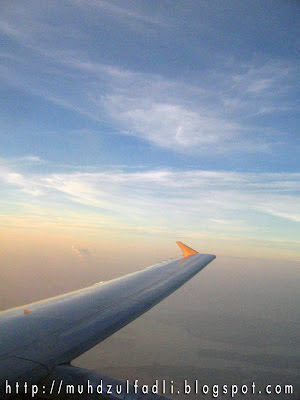 Day one in Phuket was fun but at the same time, quite boring during the day because most of the shops were closed because it's a Sunday. I ate Tom Yam for lunch. Apparently, it was not as spicy as I thought. I was quite surprised upon knowing that the place we had lunch at was hit by the December 2004 tsunami. After which we walked around looking for stuffs under the scorching sun! God, I'll get sunburn if I were to stay there any longer. My mum and aunt went to perm their hair and I went back to the hotel room to catch up with the jet lag. The hotel is super awesome! I like the bed. It is so traditional and the toilet is superb. Duh, its a new wing built aftermath. When the two ladies got back, we went for dinner. We had to pass through a stretch of slum and for the first time, I'm not really afraid of dogs even when they bark at me I know what to do. We had a hard time searching for a halal restaurant. We ended up eating seafood and vegetables. Of course, I don't touch those vegetables. There's lobster, steamed fish and prawns. 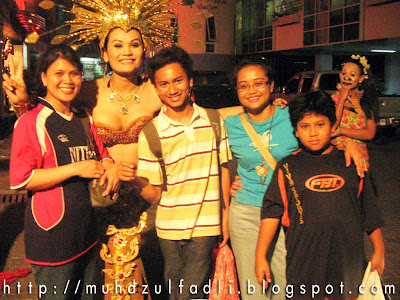 After dinner the shops were opened! And we shopped stuffs like shirts, pants, and I bought a new lamp for my bedroom. There, you got to bargain like hell because their opening price is so expensive! But of course, most of the time, they gave in. Their first question they tend to ask is "Where are you from?". My third brother told one of them in the afternoon that we were from Singapore while on the other hand, we were reminded to tell them we're from Indonesia and my second brother, being such a smart guy told that we were from Malaysia. They happened not to ask me. We've got to lie or else they won't give us lower prices. They don't need to be economists to know price discrimination, heh! We don't want them to treat us like how they treat the westerns by charging high prices! After shopping, we went back to the hotel and our hotel happenned to be so close to the mamasan (prostitute) club where there were prostitutes and drag queens up for grabs on the streets. There's one point where a few drag queens lined up in one row and one of them shook her boobs and offered us to take a picture with her. I took it with my mum, brother, and aunt. The boobs pressed on my shoulder and somehow sent a shiver down my spine! After taking it, he wanted to see it and guess what did he asked for after looking the picture? Not one night stand of course! He asked for a tip and asked for a 100 Bhat. My hairs were standing even until now if I were to think about it. Back to the hotel room and I'm dead asleep. 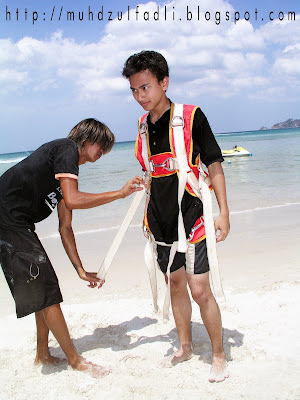 Day two was fun too. Wake up in the morning for breakfast. Got to be aware of pork sausages and some other stuffs that we cannot eat in early morning with my sleepy wandering eyes. Thank God, I took the right stuffs. After which we went to Patong Beach and we had a hell of fun. I went for jet ski, banana boat and para sailing. The beach is wonderful! I like the sand and since it's after the big wave incident, almost everything looks new and there were not many people but majority were the Caucasians having their sun-tanning activities while I on the other hand, having fun and at the same time, got tanned. I like my skin tone now! Wee! My aunt fell down from the jet ski, my mum was frightened when she ride the jet ski on my back. She said I rode it too fast and I was like "Eh, no la. Jet ski is meant to be fast right." After jet ski was banana boat and I don't know how the hell it went but we were pulled by a speed boat and there's one part we capsized! I laugh like hell because it's so funny! My mum panicked and she's holding on to me and I was like "Don't panic! You're pushing me in! You have your life jacket, hold on to it." Para sailing was hyper fun. I love it. When you're flying up there, people see you and I was waving at almost everybody, and the people riding on the jet ski. I wonder if they saw me up there because I look so small. I could see the ocean and it was magnificent! Bravo! 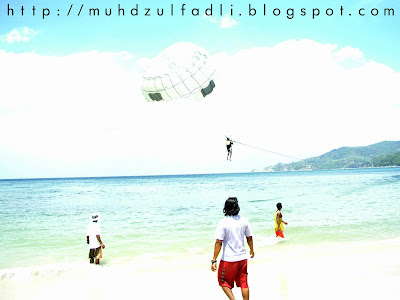 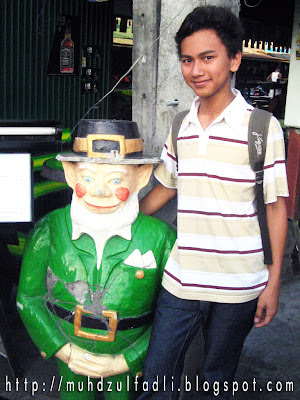 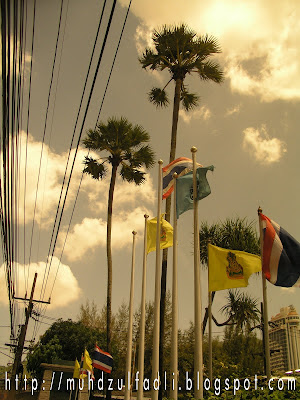 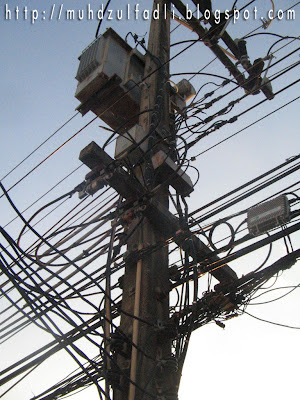 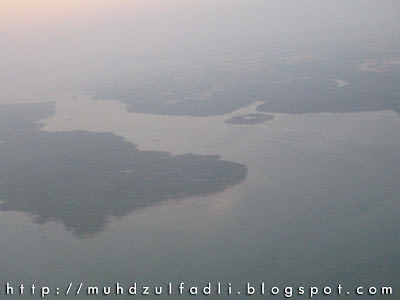 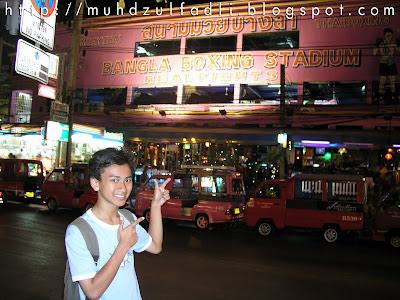 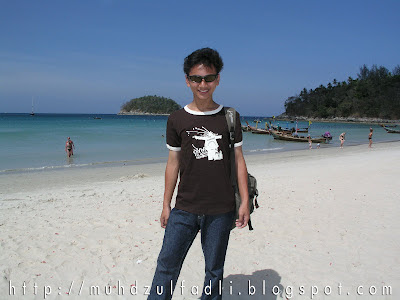 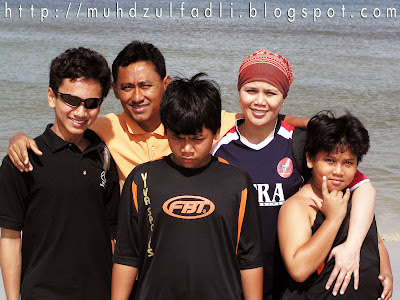 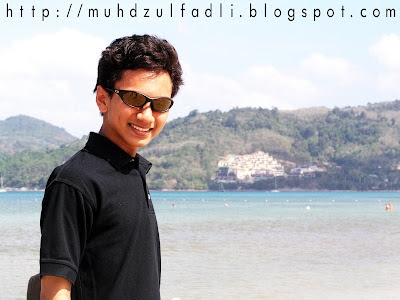 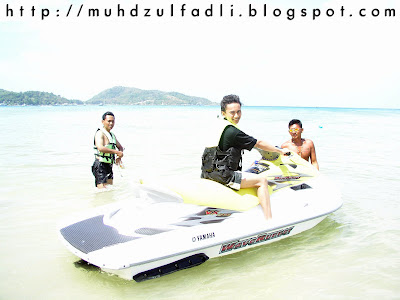 After those hot activities, we went for lunch and ate Tom Yam! I love it! It's not as spicy as the day before though. It was scorching hot there. You could hardly look up onto the sky and if you do, you will get blind. After that we went back to the hotel room. My parents and my aunt went for a massage while I, have got nothing to do, went to the gym and I have the gym all by myself! Isn't that great? Then we went to dinner and went shopping. I had cheesecake and vanilla shake after shopping! I bought some stuffs for my cousin and friends. The shopping trip was quite unsatisfying because they were not cheap and it was not easy to bargain but it's understandable knowing they are trying to cover up for the losses due to the disaster in 2004. I want to go to Bangkok. Anyone wants to treat me air tickets? Miraculously, during that shopping trip then we found lots of halal restaurants! Arabian food and all. They looked super-duper delicious and we should have ventured further out the day before because the following day is the last day and we needed to check out! 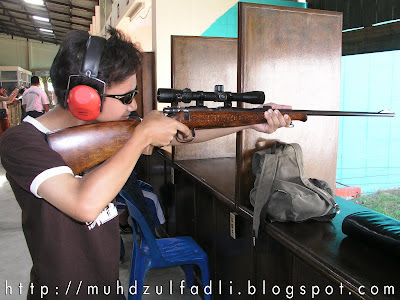 Last day was fun and on that very last day that we know there is this place called "Phuket Town" and we have always been thinking that we are in Phuket town already! After breakfast, we arranged for a driver to bring us the Phuket Town and we searched for items. There's nothing much that's cheap but and the prices of the shopping mall's items is almost equal as Singapore's. Still, I think Bangkok and Kuala Lumpur has a lot to offer when it comes to shopping even if I've never been to Bangkok, I've heard a lot about it. On the way to Phuket Town, we went to a rifle range shooting or whatever they call it and I scored 87%. My mum and brother got 90% but heck, I'm not that good in this kind of stuffs. Then went back to the hotel to have shower in the spa because we checked out early because we had to. The Thais are so hospitable. Upon waiting for the time to head for the airport, my parents went for a last minute massage while the rest and I stayed at the lobby, reading a book. Night flight is love! I like it because I can see the city and the lights. It was fun. At the same time, I like morning flights too, where I can see the sunrise. Nothing much to say about flight except that it feels good to be back. We landed here at 1.30AM (13 March) , Singapore time. I had my Literature remedial lesson this morning at 9am and now, I'm refreshed! Back to schoolwork! Yeeee-hah!