Friday was one of the most memorable day of my life!

Hafiz and I went to Orchard Road to buy some items that we wanted and intended to go to the cinema and besides, I’ve not been out for a long time ever since the holiday started! And Fiz’s uncle gave us two free tickets to Anugerah Planet Musik (APM). It's an award show for the Malay music industry, some thing like the Grammys. I was jumping with excitement of course because, I don’t have the intention to go to the show this year because it’s in Singapore Indoor Stadium and it would be so boring, so I thought I will not lose anything if I didn’t go for this event. We intended to get to the backstage without the ticket to see the artists we wanted last minute and cancelled our trip to the movies. We waited for the arrival of artist from Indonesia, Malaysia and of course Singapore! And I got to meet Kris Dayanti and I got to take a photograph with her! She’s nice I tell you! And came Jaclyn Victor who’s kind of unapproachable and I got a photograph with Aznil the funny host and talked to some other artists like Irwansyah and Acha, Jaclyn , Kris Dayanti , and some new artist that I don’t seem to know them well but, meeting them is such a blissful moment! Thanks to Fiz’s uncle for he tickerts! 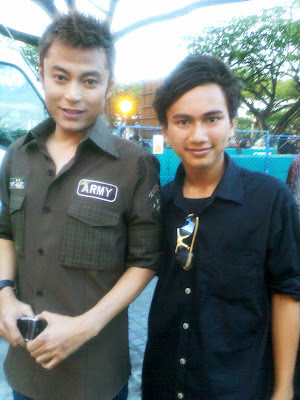 While I was wandering away awed by the celebrities walking past, I was like “Eh these two people look familiar?” and Fiz was like “That’s Irwansyah and Acha!” And I was like, oh boy! Sure or not? But I don’t get picture with them because they were like rushing or something like that and it took me a long time to figure out who they are. Get to see them up close and they were smiling at me while I was smiling randomly to all artists. Acha is so adorable.

I got interviewed by Fiz’s sister’s friend from Sungguh.com. I think you can go to that website to see if I’ve already been put up by them around these two weeks. They asked me how long I’ve been waiting for those artists and since what time I was there. So, it’s kind of cool. Then, another interviewer from Suria channel interviewed Fiz and me, asking to give opinion about metrosexual guys. I gave them some weird answers and said it was good. And then when the camera starts rolling, I don’t know what to say! And I have to fork out words and I almost speak English to them! My Malay was totally off at that time! Well, Sorry Cikgu Fidah! And my face will come out in the television soon when the show Cakap Sini Habis Sini comes out out. It’s obviously a new show coming soon because I’ve not heard of it anywhere in Suria or any other channels. Whoever who’re metro sexual please don’t get mad because my comments are given as impartial as possible! 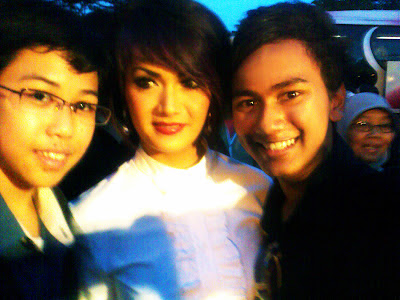 Then we went in for the show, quite stuffy in there and thank goodness that Aigner brochure we got served us as a hand fan. The show was nevertheless fun because there were funny and entertaining hosts/hostesses. Too bad you can’t see them live on television except via Malaysia’s Astro. Siti Nurhaliza’s performance with Gita Gutawa and Taufik Batisah was nice! Siti’s voice is alright, she can still sing live! Well, though some said she couldn’t but well, she has still got her charm and nimbly voice. After the show, we went to the backstage again and Fiz and I were the first two people to be there and the security was not so tight when we were there until loads of fans came to see them. Thank Allah for not making such a huge humongous crowd like last year. But last year I’m in the magazine and this year, in television and internet jargon. Thanks to all publicist!


I shall not elaborate more on the show because you guys must watch it and all artists were good! I like Gita Gutawa because her voice is so high and unique and she’s so gorgeous in pink! She sang Biarlah Rahsia and her voice was so high and even my Siti Nurhaliza cannot reach to that extent I guess. But still, Siti Nurhaliza is still my choice - love everything about her. Back to after the show, the first person I met was Mawi! And he’s nice. I’ve got a photo with him. Apparently, if I knew it earlier, I would have brought my camera! And I took photographs with Najib Ali, he’s taking the same van as Mawi. And then more artist came out and the security is like chasing us nicely to make way for vans and buses. Then, I get to meet some celebrities which I don’t know their name but I know their faces. Then Siti Nurhaliza came out with her husband in the car and we fans stalked the car and it slowed down, wind down the window and we fans crowded around the car and get to shake hands with Datuk K and Siti Nurhaliza and get to see them really upclose and Siti talked to me and Fiz! We definitely conquered the car window. We were talking about her new album and ask her to make a concert in Singapore her and some weird stuffs like updating her blog - SitiZone. Apparently, most people don’t get a chance to talk to her like us! We were lucky! Alhamdullilah. And then Irwansyah came out. We were somewhere near the dustbin and Irwansyah and Acha were holding hands. And then Fiz and I were calling their name and they came to us, running, holding hands and people from nowhere came crowding us! This is so unfair because we did all the calling! Again, I got to shake their hands and say that I like them acting in the film - My Heart. Then I got to take photographs with the “Gol Dan Gincu” guy - Ashraf Sinclair, with a female celebrity and found a new friend! Apparently my cell phone battery was going low so I had to borrow their camera. It's good to know there are nice people around this island! 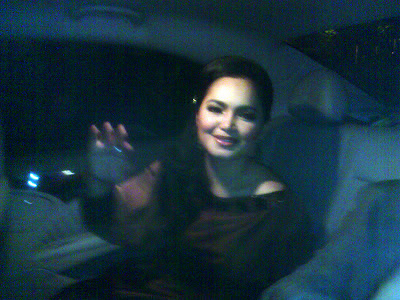 This is trivial, I didn't know Sleeq until I saw them riding my car to the event. How awesome!