Temasek's Open House was fun and it was quite a hit for me, I guess? Ouh well. My cousin was super late. He was late by 45 minutes and it's enough time for me to go back and shower and then play the computer and go out but no, I didn't. I kept calling his cell, he didn't pick up. In the end, I resort to calling his house. The thing is, I had to call my mother to get his house number. See, what kind of cousin am I. Haaha. Finally,  we met and then we headed to Tamp Interchange to meet Tim. Obviously, Tim was way earlier than me and way far earlier than my cousin.
Anyway, when we reached TP, I was totally lost, not knowing where to go. Like I said to the two of them, my school don't really bring us to Poly's and JC's. They were like asking me which school to go first. I said to them that I don't care so long as we get something and not go home empty handed. I went to the booth and got them a goodie bag. While walking somebody stopped and with one of her fingers on her lips and I was like "Who the hell is she? Can't she see or what?" Of course, I'm totally annoyed but then suddenly I realized that it was my primary schoolmate! I was like "Oh my God, long time no see!" But oh well, time doesn't allow us to chat, but it was so great to meet her after so long!

We decided to enter into one of the auditorium. And tell you what, here's the juicy part of this entry. Not really actually. I mean we were walking and the was a straight row of auditoriums. One of them has ended their show/presentation and we can't be bothered to wait. So we went to the other one because it had just started. But before that, we saw this drag queen walking down the corridor asking people to go in and all but I was totally unaware what is she talking about. After some time, when we made a u-turn into that auditorium because the time slot says the next presentation was exactly the time on my watch. So we just went in and saw that drag queen telling us to enter from the other entrance - it was so funny!

We entered from the back and realized that it was just an act! He was so funny and the audience were all well entertained I guess. OMG, seriously, you people should have gone there and have a look as there was this character named Shakuntala G, and she was superb. On the picture below, she was on the far right. I mean that drag queen and Shakuntala G was like quarreling with an accent and all. That act really made my day. Anyway, after the show, Azhar wanted to take photographs with Shakuntala G and all. well, even I wanted to. Wish granted I guess? Natasha (Tariq's sister) was so surprised and excited when she saw me. 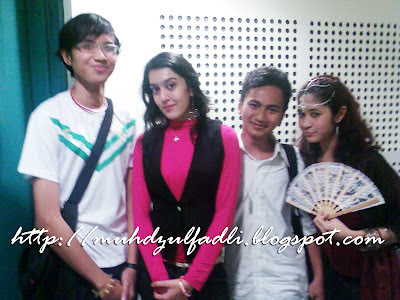 After that we went to redeem the free shirt where you have to design yourself and all and at the booth I saw my cousin Naz. She was so excited that she ran into me and hugged me as well. Of course she's not the only one excited! wWe rarely see each other when term starts. Better yet, it's unplanned. 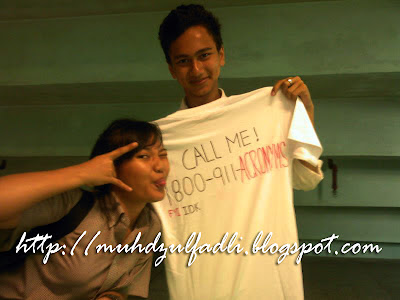 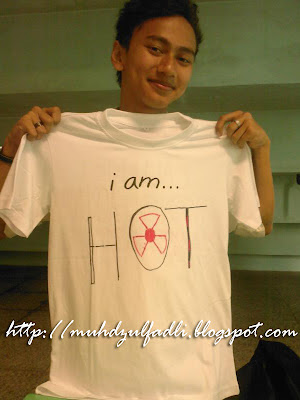 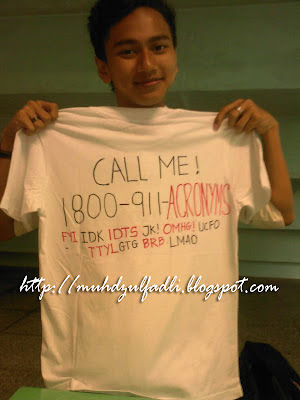 We went to Simei to have a quick dinner and Az and Tim had been so nice to go eat with me and escorted me up to class. I really appreciate it, very much indeed! And oh yes, that pineapple cheesecake doesn't taste like pineapple please! I am so going to miss the course I've went because today was the last day of the course! Sigh! Well, moving on, I do have some of my mates contacts. If there's any open house of mine or any parties, I will definitely invite you people. So I guess, in summary, what really made my day was the act acted by Natasha, that Shakuntala G and the rest of the acting crew and Az and Tim and the course I went. Not to forget the people I saw like Faayzah and Nazurah and some other people! Cheers!