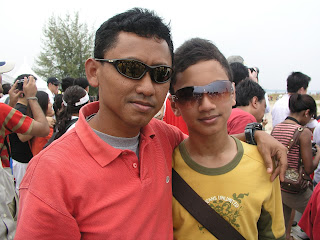 I went to the Airshow last night and I heard that it was their first time doing this kind of show, so this means something: They have loads to improve! I'm not trying to criticize because of the line of study I'll be in in the future but even a man said to his kids "Woah, at this hour, it's more worth it if I go watch a movie and have a popcorn and sausages with me. Better yet, it's air conditioned." Come to think of it, it's so true and guess what, three-quarter of the time was spent on queuing for the shuttle bus through and fro. It'd be more worth it if you have a picnic at the Changi Beach with your food and save the trouble of having to go through security screening as well and what's more annoying is to have people cutting your queue, wow, that really got onto my nerves. Won't elaborate much because we just watched the flight display, then see the exhibitions, and then have a good look at A380 and then wasted our time queuing for the shuttle bus and you have to pay $50 bucks if you were to park there and $8 surcharge for taxi ride. So do you think it's worth it? Especially when you have to endure traffic congestion...
I was feeling so thirsty that I felt like fainting but I'm not the type who faint. I can't even faint! And the bus was so stuffy that you can steam a chicken in it. What's with the unmovable air conditioner. It changed my mood like anytime, I could just strangle anybody there. Speaking of manners, hello! This is not some kind of a third-world country where people rush to board the bust or even sit on top of the bus! I had no mood to take photographs!

Anyway, when we got back, I felt so relieved that there's proper A/C in the car! Super exhausted already. Then we went to Changi General Hospital to visit my aunt who was sick but I think she'll be discharged today. So glad!

P/S: Why is it so hard to find people who're free these days?