Coralite: Prom Night for Class of 2008

This week after the reunion party for me was fun except that I still have some unaccomplished tasks like making a shopping list and stuffs. I think I would eat more than what I will be shopping for. Anyway, really look forward to having a day out with my bestie, Syaz! 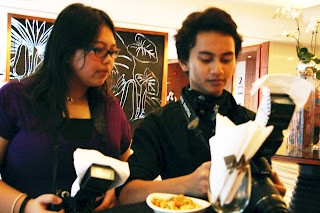 Last night I went to Coral's Class of 2008 dinner and dance because I was The VIP, Very Important Photographer. Practically, I enjoyed myself because I've never been to a prom night before, and secondly, this is like my post-graduation prom although I have to take photos, third, I get to do what I have not been doing ever since I left secondary school: taking pictures for events and of course, the best part is to catch up a whole lot of gossips and jokes with my Co-Curricular Activity (CCA) mates turned-to-be good friends. You guys rock my world!

We were told to report early like around in the afternoon because the one of the organizers was Rubez, who is ever enthusiastic, unlike me who'll be like dilly-dally. So three of us, Faz, Nat and I went to the southernmost point of Singapore - Pulau Sentosa and enjoy the wind and snapped some shots. It was funny being sarcastic to a bunch of campers who had nowhere else to play water.

Anyway, I love the fact that some people do remember me because I am that popular. Only kidding!

The food was awesome because it's a buffet, we have to like self-serve and I like the chicken and the salmon and the cedar cheese soup and the cheese stick is just marvelous. It's so mouth-watering! The cheesecakes and fruits, indescribable. And the fact that we are VIP's, again, Very Important Photographers, we don't have table for ourselves in the ballroom so we have to bring them out and we are served by kind bartenders by serving us drinks and fork and spoon and even talk to us for a while before getting back in. Then come out again to attend to the food. It was marvelous. 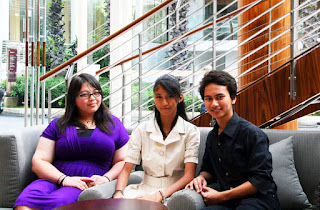 Thank God this week has been great. Reunion party, SRH, RPH, Coral's Prom Night (I'm not surprised there are no teachers), KL. In one week!

The prom ended like around 11pm plus and I went for a slumber at Royal Plaza on Scotts! And I'm off Singapore for a few days. No doubt prom night is better than my own party. Oh yeah, and thanks to Daniel's friends for sending us out of Sentosa to get a cab. Otherwise...


This is hilarious (inside joke): "New clothes, new muscle, new me."