Don't be surprised if today's post is vague and probably music to some of your ears. I'm annoyed but let's not start with that.

Last Friday's outing with Fiz was fun since we got substantial discount eating at this particular restaurant. People like our face deserve to be charged extra when eating out but with ideas like his, lips like mine, and courage of ours, we got the discount. Okay, not that we were doing anything illegal but for all it's worth, we got what we wanted, although it was not a dessert. (You know I'm still confused with desert and dessert!)

Later that evening, I went to watched Towkay Wayang, a musical with Khai and Syaz. I apologized for giving them the wrong info on where to meet and it was so unlucky that my spare phone's battery was low. The show was fun, although I heard people saying it was predictable and short. Khai and I then went off since Syaz was busy then to take photographs and catch up with his college friends. Khai, don't feel offended but sometimes, you are so not logical, which was funny of you!

On Saturday night, parents were out of Singapore. I attended Fifi's Birthday party. Hope she likes the handbag I bought for her! I enjoyed myself except for the part where I was called out for this game. Which was so not fair that I was chosen twice to play the games. It was humiliating! However, it was all just for laughs and I had mine as well. 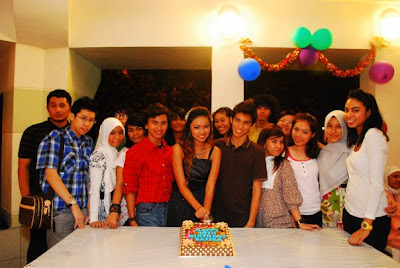 HAPPY BIRTHDAY TO YOU FIFI!

After the party, walked home from Tampines to Pasir Ris, with Fiz, slowly, talk (especially about you-know-who). Halfway through at Pasir Ris, we decided to have supper.

Today, I'm getting a good rest. I still have not recovered from my jumping rope regime. I have this plan, since I'm so caught up with work, and soon school plus work (though work tones down), I should start exercising at home and use the resources I have instead. Besides, even if I have the time, my gym kaki might not have the time, so, whatever.

Anyway, I've sent an e-mail to some of you, please respond!