In The Name of Acting

Cassie called me last night if I mind helping out with a film-making thing they're doing, so I did for the second time. But this time, they put some bronzer on me and the equipments are all heavy. The batteries, the tripod stand, the lightings (floodlights and spotlights) and the huge reflector. It's as though you're really doing some studion photography that sort and we have to stalk the lift and all. It was fun despite the fact that it is very tiring and unforgiving weather! Thankfully it's indoor. Some were really annoyed by passer-bys who just cannot keep quiet and a lot of funny things happened. Cassie somehow was a victim of a pervert and she didn't took the lift after that! 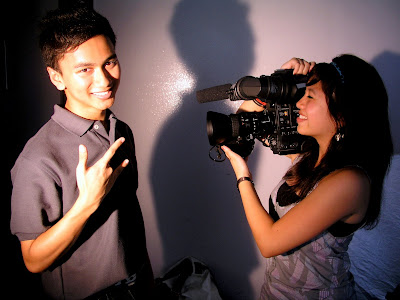 "Come take the lift then we can sound him too!" She nodded, she ddidn't want but I went in.

"Come, come, can fit the lift?" I pressed the lift and ask the uncle to come in. It was a cargo lift.

"Woah uncle, today got a lot of work uh?" I continued. Clearly he is but...

I know it was mean but I have solid reasons to say that to him! He said that to himself that too bad he was too old, so what I just did was to rub it in. Didn't make up anything to make him furious! Of course, he kep quiet and alighted from the lift with trolley from Cheers. Retard. No surprise she felt molested. What's more from what she said, he stared at her from top to toe. Can you like imagine! 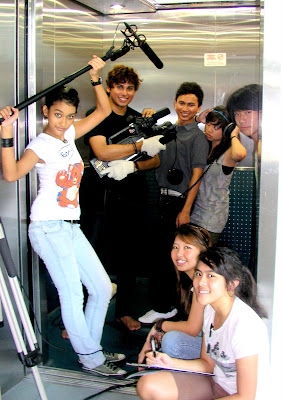 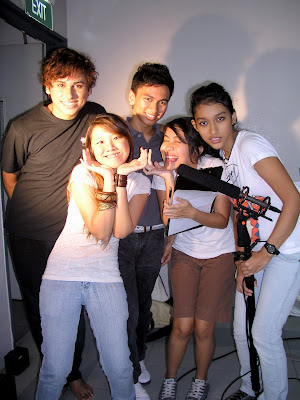 They joked about some classmates of theirs and how one of them is like "born handicapped" so should not be pitied or symphatized because he's merely annoying. They called him King Arthur and when Amera explained to me, I just couldn't help but burst into laughter. I realise these friends of mine learn similar stuffs I learnt in school. Like so cool! Like I can like talk jargons with them!

Anyway, the spotlight was like so warm that the thin bronzer they applied on my face is like melting. Took some photographs for my own memory with those people and the equipments! And some people just have that "orgasm" when being fanned by thereflector. Undeniably, it was soothing you would even "Aaahhh...." 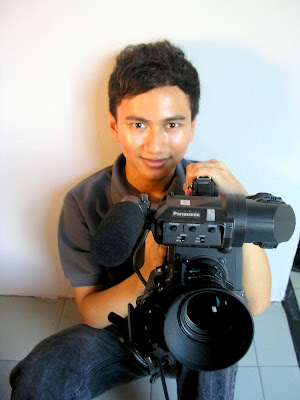 Was tired by then. Parents fetched me, and headed home. I guess from today onwards I have to cancel all my outing plans. Tut-nami is hitting my holiday island... So gone are the free time and sunny island as a huge tidal wave of tutorials are not giving any chance for us to float or stay alive.