I am grateful for the fact that tests are over [at least, =( exam yet to come]. 05 June 2009 was fun-filled. Only some know why. I am excited about the holidays. Do this and that, all the things you cannot do during school term. Notes aside.

I was late for Manifestasi. I think I made an entrance but Khai just had to spoil my feeling (of making the entrance) when she asked me to come out again to get her in while the show was about to start with the lights off and all. Oh, and again, I got the front seat. How cool and thanks big time to Cassie, Amera and friends for helping Tim, Khai and myself the seats that we want. I owe you guys big time! God knows how much I appreciate their effort by putting their bags on our seats before we arrive and all. Several things did happen, it's and inside joke but seriously it was so funny! I made my six-packs while one of my ex-HML friend did something so out-of-the-world or rather unexpected thing. He was like in-out-in-out, seriously, I have the footage I can show to those who have a good sense of humour.

Cassie was laughing, so I asked, being the busy-body I am.

"What are you laughing about?"

"Haaha, the guy seating there (on stage) using the maracas movement was so funny just now."

After that I keep quiet not knowing what he did. The show continued, looking through other performers until my eyes caught him, then I laughed, hysterically. Thankfully the music and singing and all were loud enough to bury our voice until I said this line out loud so that my friend can hear.

"I think he forgot to drink his milk"

And the music stops. The word "milk" was then loud enough to be heard and especially I was at the first row, I felt that all eyes were on me. They heard the word I said "milk". I think I turned red in the dark just like my shirt. I learnt my lesson, no matter how loud my surrounding environment is, never challenge them. 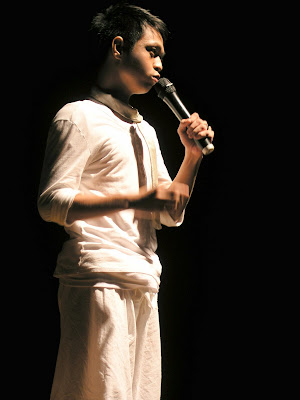 Syaz singing one of his own-composed song. =)
The show ended, Syaz cried. I don't know why. Maybe he's sad with the fact that he have to face 'A' Levels? Or maybe for the music that he composed? Anyway, I love one of the soundtrack. I think this years shows strength would be its music, which really creates the mood and all. What's more their acting seems real , and oh God, there's even spitting and crying in the show. There's even like some canning scene and all. Duh, the storyline is about war in Vietnam and stuffs. 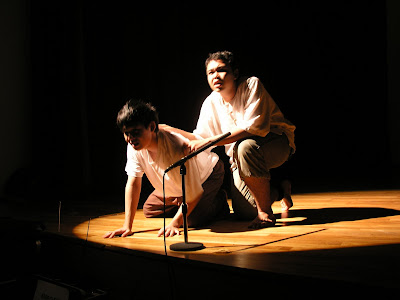 One of the many scenes. 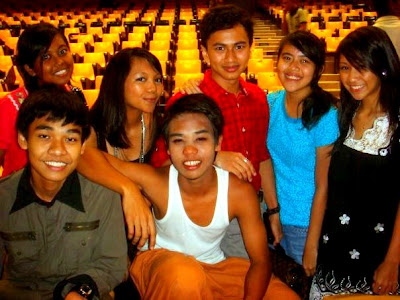 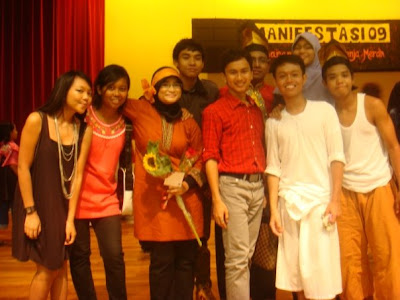 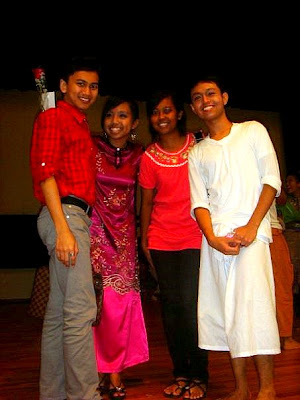 The two of the many key people who made it. =)
After the performance, took some pictures with them (cast-friends-etc), and the HML students, miss Cikgu Fidah. I wonder how her reaction would be seeing the in-out thing done by Haikal, I think she will laugh out loud too. Once done with photo-taking (hope it appears in the press or something-RIGHT!), Khai, Tim and I went for late dinner/supper? I was so thirsty I drank two glass of lime juice. The weather was unbearable! We walked Tim to the junction and we went home. 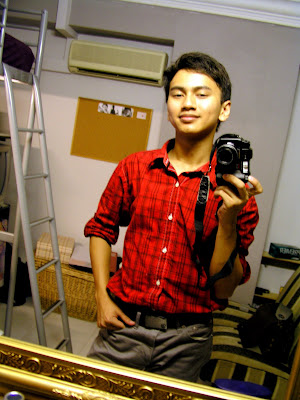 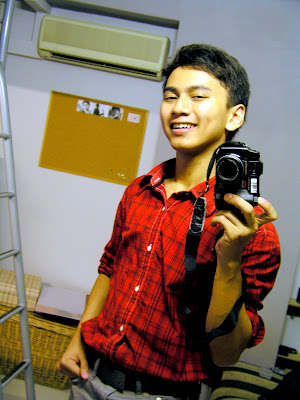 Tomorrow is Saturday and I'm planning to stay in, be excited about my vacation. Just so you people know, finally I've gotten a new memory card for my camera! At the right time, the old memory card got corrupted. But who cares about the old card. Can't wait to return Nat's card because it has been ages I've not returned her card and I hate keeping others belonging. Oh, bought a new ear piece too!

P/S: I really sat on the floor and tried to play maracas like how he did, but I fail.