Sinema Showoff! took a blast last night featuring foreign films. Some were hilarious and some seem to sound like horror but actually it's a sad story. Whatever, kudos to all of them for putting great short film. It was a full house last night that some have to seat on the steps. 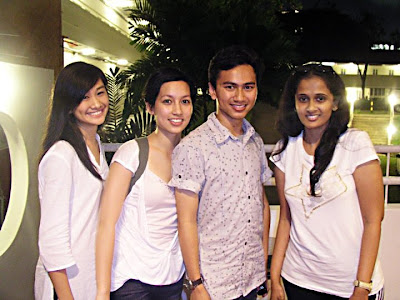 Lately I heard several never-ending feuds with people not liking each other and doing things behind each others back like backstabbing, bad mouthing and all.

I was quite crossed these few days. No I'm no women who has menstrual cycle but I have my reasons. Having my throat choked with words. Having to keep quiet due to respect. Having to be annoyed with the same thing all over. Having to deal with all the things I want to do in life. Having to adapt with something that's ever changing. Having to face and deal doubtful people who keep on reminding as though what they believe in is really happening. Having to uplift to expectations which I don't even set for myself. Having to prove something that's not worth proving. Having to do something that doesn't warrant my happiness.

I feel suppressed. Yes, that's the word I've been looking for. Probably I sound selfish. I don't care. You people are living example in the first place, hence my unhappiness. That's why I'd prefer my other "option". They don't do much talking and arguing. They give the green light to almost anything I want to do. Don't mind me if I were to ever one day be a screaming ogre. I'm no recorder but I remember, and I can't be a carbon copy like any of you out there. I acknowledge if my principles were to ever be wrong, but you can't say my opinion and personal encounters to be unrealistic, wrong or impossible. After all it did happen. Touch on culture (not racial issues) you will curl and hurl.

I don't label myself as soft on the outside but hard on the inside. Not vice versa either. I don't use force because to me they are for the weak who can't express themselves in words. They are the ones who can't come to a compromise, sit down and set things straight. Little did they know tongue is the best weapon that starts to rip their losers hearts off and the best fire to boil their blood and that makes them wanna punch you because they are just lost for words. But if duck, all they will be punching is thin air. Score board: 2-0.

This is something metaphoric you just have to crack your brain to know what I'm talking about. It's more than one thing that's for sure. It might be you I'm referring to.

Dinner at Popeye's was a blast.  I need a breather.