There was a hype about "loike" a few months back with my buddies that up till today it somehow sticks to me if I were to want to annoy anyone who gets annoyed with this phrase "I Loike!" Why would one ever want to add extra letters in words while we have been using acronyms even in our everyday speech?

Anyway, that's not the point. It was a random joke that occurred in my mind. Weekend was burnt but was fruitful. Thanks to my beloved Final Year Project lecturer Ms R for cabbing Syaz and I back to the east!

So much for holidays. I've not been getting enough rest and it doesn't feel like holiday to me but I've done fruitful activities like assignments and whatnot.
As most of you would have known my MSN Messenger will be changed with effect 1st July. Duh, this is something quite important because e-mail has been part of my mode of communication ever since BB, so if any e-mail goes to the old account without reply, there will be complications. I've done my best to let know everybody. Of course I will import contacts but in case you don't know, here's a little heads up.

A lot of people owe me money! No, actually only three. I need a "bailout". I need to watch movie! Watching Ugly Betty with Khai 2 nights ago was fun though I had insufficient sleep. 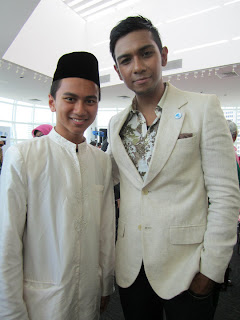 Which leads me to yesterday's event, the launch of "Bulan Bahasa" (Malay Language Campaign) where I performed playing the tambourine. The food was good. The thrill of getting pictures (more than once, not for me) with the first Singapore Idol was entertaining since we got nothing to do after that. Seriously, tak ada kerja... Only today I know the difference in tambourine and tamarind. Hands down, I was a joke. But they sound similar so I guess no one suspects my vocabulary error then!

I'm in love with the view of the skyline and MBS.

Yesterday was a launch, today it's a tournament. I owe Wardah big time for making time in spending time with me at the Katong Challenger Trophy. I'm not a fan of soccer or other contact sports but I was there to help out being the emcee. It was fun being a little impromptu at times, and doing some "damage control". It was raining heavily in the morning and the field was all muddy that the field turned into semi-mud bath. Most people just take of their slippers and walk barefooted. Better yet, some covered their shoes with plastic and they look like astronauts! 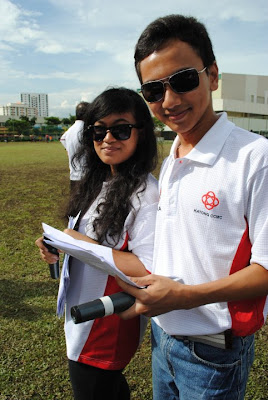 It's the first day of school tomorrow. It's that fast 2 weeks have gone.