Has any of you by any chance watched August Rush before? I was skeptical when my friend said it was good. Then I was wrong. We must not only not judge a book by it's cover. Don't judge a blu-ray by it's cover too!

Anyway, in this month of August with the YOG break coming up, I have my own race to do against time. Final year project is starting to take on it's toll with the reports and whatnot. Exams are coming up, which I still need to find the time to revise because MS Project is totally not user friendly. I still need time to write notes for other modules too!

A few days back was one of my best friend's birthday, Syaz. Khai and I had this last minute shopping running round the mall to find that particular shop (I don't know the name of it) and I ended up getting the gift for him from across the mall. What a waste of time, seriously. I still can't believe we took the wrong bus. Okay, not exactly. It's the right bus going to the opposite direction. 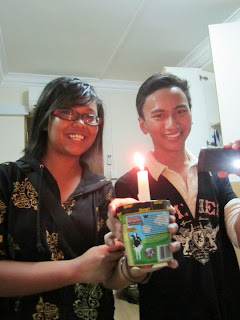 Khai was stoning. I was BBM-ing. When I look around...

"Yeah this bus goes to Pasir Ris! (I saw LKY's face that says welcome to Tiong Bahru)But why this bus pass by Tiong Bahru!?"

"I don't know! (What does Khai know in the first place? Just kidding!)

So after all the commotion we talked to the driver and positive. We're on the wrong track. What an episode.

When the clock stroke 12, we entered Syaz's bedroom and sang him birthday song with a house candle on top of Ben and Jerry's ice cream. Big candles are the in thing these days ya'know. Cross fingers he was damn well surprised and not expect that at all. 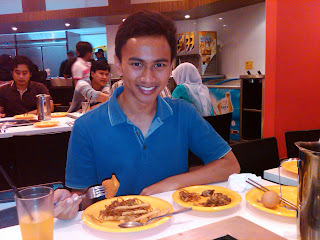 Last night I was away across mainland to do some shopping for upcoming Eid. I figured I will be occupied with tonnes of work to do so I took the liberty of doing it before Ramadan. Sorry to "SALE!" I don't think I will be able to make it this year.
My relatives and I had dinner at Seoul Garden to satisfy whatever cravings we had before the constraints we will be having in Ramadan. Those who fast would have known, even after break fast you don't feel like eating much already. Going for a buffet for break fast just seems to be a bad idea.

That's that for an update. Happy National Day! (Let me wish this a day in advance.)