"A true leader always keeps an element of surprise up his sleeve, which others cannot grasp but which keeps his public excited and breathless."
-Charles de Gaulle

I'm not a leader, but I do have elements of surprise up my sleeve. Don't underestimate what's under these short sleeves. Kidding! Credits to one of my best friends H.Y for the jump start on what surprise should we give to one of our best friend, N.Y.

So here goes the surprise from H.Y (Hafiz) and Z.Y (myself) to N.Y (Nat). This surprise has been thought through since March. We told Nat we had thought of something and she was head over heels wanting to know what is it. But the plan was labeled "Surprise" so we kept it a secret.

Seven months later, she finally knew what her surprise was. 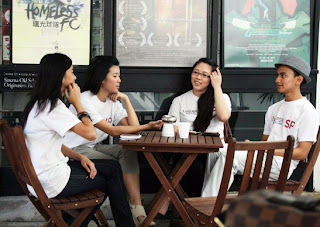 This afternoon she accompanied me to my interview recording at Sinema Old School. I was late. I apologize to all those affected, heh. The interview went well. It was not as lengthy as I thought.

Then on we went to Raffles Place where we met Hafiz. Told Nat I had to get a camera which I rent from a rental company, so she bought that story. 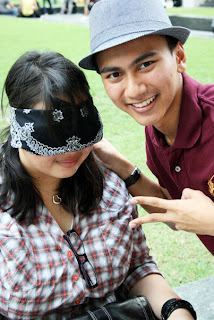 "Eh, what time are you taking your camera? You said you're late right?"
"Errr, actually, we're here for your belated birthday surprise. You have to be blindfolded, take off your glasses."

From Raffles Place to Boat Quay we walked pulling Nat, carrying her heavy stuffs. Royal treatment! All eyes were on us. Weird stares. When we were crossing the road, it's like helping the blind to cross. The best part was, Nat was petrified. She's afraid of falling into the drain or walking through the wall. 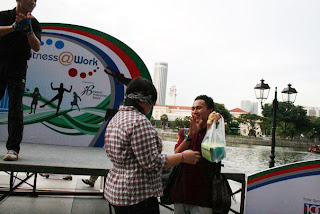 People who're drinking along Boat Quay were staring and some were saying "Girl, I'm not telling you where you are." but they were ignored by her because her ears were stuffed with Siti Nurhaliza's and Eid songs, which she don't really like. She had to dance to the tune of our music. 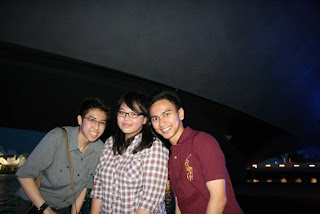 She was still blindfolded even before her surprise boat ride. We prayed hard the boat won't sink, I'm saying this in the name of joke Nat. You've beaten me enough, haaha. Everyone who took the same boat asked "Can she get onto the boat?" , "Isn't it dangerous?" I've told Nat, if she were to fall she can sue me. That was a tricky card I played to get her blindfolded! 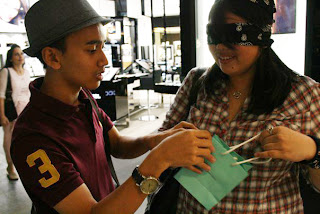 Her second surprise was after we went to Tiffany & Co. for her open-heart bracelet. She's blindfolded again, (I ended up giving her those bandanna because it stinks of her sweat) She was turned like a gasing and she was brought around Marina Bay Sands. Again, the looks we get along Chanel, Dunhill, Gucci and everywhere else. The best part was putting her in front of Gucci store, and asked her to exclaim "I'd die for Gucci!" and she didn't know who else was in front of her after that.

Going down the escalator, we showed her a picture we just took in front of the store. 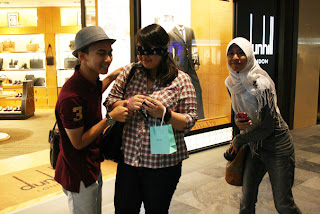 "Look, who's this?"
"Eh? Where is she?"
She turned round and round like another gasing but she's nowhere to be found.
"Nat, tell her you love her."
And she did several times. Louder each time when there's no reply. When Fazlun appeared, she was so elated to see her. They hugged. Awe!

That's a perfect end to a perfect day. I really hope she's well surprised by the two surprises she got because I'm tired pulling her.