Chocolate for the Heart 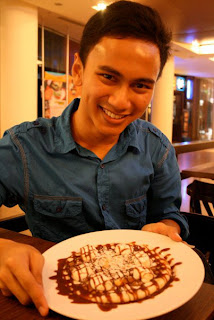 It was after his work. It was after our boring day at home, rotting, not knowing what to do. But we have something for him, Hafiz.

I told him I wanted to get my boots since my parents did manage to find it in Perth. After his work, with his tired, worn out feet, he dragged himself to meet me at Marina Square. My task was to stall him while Nat comes from the back and blindfold him suddenly. That failed. Nat wandered and somehow didn't find us. It's okay, there was a backup plan. A last minute plan, uncalled for. Fiz took the bait, somehow. I don't know if he sensed anything fishy already. Since things didn't go as planned, we met Nat, and asked him to take his glasses off.

The plan was plain and simple. The catch was the blindfold. The thrill of walking a blind person is exhilarating. We did it again, only this time, on him. 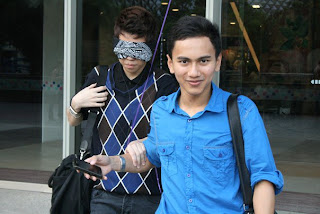 We didn't reveal where we're going but he's scared out of his wits. Knocking my hand softly onto his head freaked him out while the fact is, there's nothing in front. He walked as though there's a drain on front of him, trying to figure out what's in front of him. 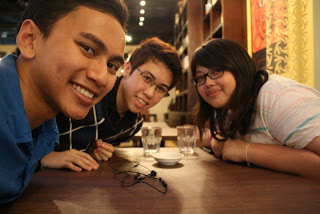 When we reached, we asked him to sit and have a taste of something we put into his mouth. Then he knew, we're at Max Brenner's! Happy birthday (though belated)! Hope you had a good surprise, heh. I'm not going pour my hearts out here, but you know what you mean to me. For 8 years already!