One Way, Or Another

I'm in love with this ultimate stalker song: One Way, Or Another! The song was used as one of the Mean Girls soundtrack. The funniest and glorified mean girls show ever. It's like murdering someone by driving people nuts and when they walk out, BAM! they got hit by a bus. Some people are just fated to die that way.

Speaking of death, in the light of Darren Ng's murder case at Downtown East which came out in the news a few days back, I would like to express my condolences to his family. The murder is something to condemn about because no one in the right mind would have taken someone elses life freely while they can't give one to begin.

Happy Diwali!
Then comes Diwali, I would like to wish all my Indian friends a great Diwali, festival of lights.

Currently I'm watching and listening to all those old songs backdated in 2003. I realize most of my favorite song was dated around that year. Probably that's the best time where all the creative juices have to splurge out. The new songs these days either have good beat but meaningless lyrics, or meaningful lyrics without a good tune. It's music to heaven's sake. I beg you Hollywood, make a good one.

So, what have I been up to really?
As most of you would have known, and would have heard I've decided to concentrate on school work and project. Last night chatting with Fie and Jerry made me think a lot. I do need to set my priorities. Duh, all these while I did figure out my priorities but along the way it got lost, somewhere, somehow, because of one thing. Taking revenge sounds more satisfying but not promising. So I've decided that rather than taking revenge against anyone, I'd rather learn how to manage myself. Revenge sounds more fun still, but ultimately it's only one-time fun. 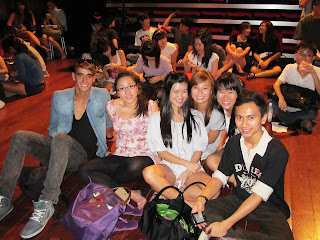 First Take, The Substation
I was there a few days back for a non-filming motive. I wasn't the only one. In fact most of us were there as part of our site-visit for one of our modules. One of the many perks of my study is that I get to visit a lot of events. Some free, some This event is similar to the project that I am doing for my final year so going to this short-films event is nothing for me. I used to resent short films, especially local ones but since I'm forced to watch it because it's part of my project, I kinda start liking it. 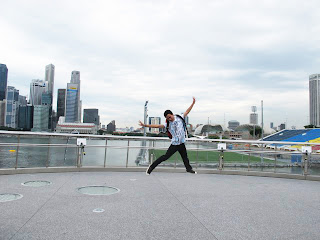 Again, a site-visit for another project. Here's the thing. This is not my first time visiting Marina Bay Sands, and not my first time either for First Take but I just have to go there again and snap images. If I were to look back at my photo archives, you'll see tonnes of it already. Totally pointless, but for attendance, I'll just have to show my face. On the upside, I got to ride on a miniature Rolce Royce. Awesome much!

Sinema Showoff!
Here comes the final-year Project. For my study I have to do a very short period of internship, with a dose of final year project. This is it and it's a fair-share. I'd rather be this way than having to face three months of internship. I've seen people literally die with bloodshot eyes and overdosed caffeine trying to survive through the course. It didn't happen to me probably because I'm the one causing my lecturers and supervisor the trauma of their life. It's ending soon, and for now, my team and I are working on the report, which I'm not so proud to show anyone now because it looks like salad. 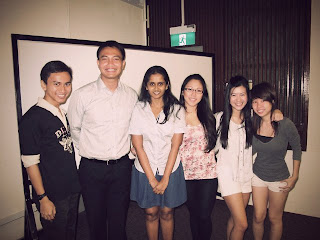 NAPFA Test
Two weeks back I was at the SP Sports Complex for NAPFA Test and I would really like to thank all those well-wishers. Only the Almighty knows how happy I was to be awarded with silver. Funny thing I didn't know those who got silver in my school are entitled for a free Crumpler pouch!

Many asked what am I going to do after graduation? Seriously, do you really want to know? Here goes:

I just want to get wasted (read below, not drunk!) for once, after graduation.

In the short run, I just want to sit home and forget everything else, watch my favorite channels like Discovery Channel, National Geographic, Disney Channel, HBO and whatnot. I don't have that luxury in this state of mine because all the television in this home is monopolized by my siblings except the one in my room because there's no cable.

Then on I'm gonna indulge myself in all the best junk food like Häagen-Dazs, Chips More, Famous Amos, instant noodles and all the cereal and snack you can find at the hyper mart. If you think that I've lost my hair because of instant noodles, blame NS, they took mine away.

I'm gonna go to the library and stock up all the book that really makes me laugh and have a movie marathon, non-stop. No drama already, life is already full of it. Of course part of the weeks spent will be for social activities like going public with family or friends. Work? What work?

I'm kidding. Of course I will be working. What kind of 'wasted person' do you think I want to be? I will also have to start writing my book if I ever want it to be realized. It's so hard to write these days with writer's block and deficit in writing energy. Worse still, I need it most when I want to write my project report. Even Fie realized my blog has lost it "Umph!" a little bit. Reason due: secrecy. Somehow he's like seeing through me. Thanks for the Nasi Lemak last night anyway! Awesome much.

After which I will continue my study. It's still under 'planning and construction'.

I'm not that wasted after all.