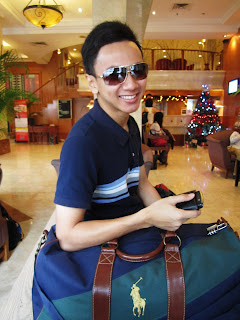 "Let's start with a clean slate."

It's a common phrase to use on 31st December prior to new year and a few days after which, the clean slate will be smeared with different kind of paintings. Wonderful or not, only the beholder knows what to do with it.

How was my yesteryear?
Dramatic.

Like the economy, it's never going up all the time. In the early stages of the year it was all good and I was happy go-lucky until a certain period of time suddenly it went down a little bit though I wasn't sure if it's me or the economic downturn in the second or third quarter of the year? Anyway, mood-wise it has always been that way for all of us so it's forgiven.

As for school, all of you would have known by now that I will be graduating soon. I'm not so sure when will I be graduating exactly but soon enough. Details will be revealed soon! My final year project report is due soon and I wish myself, my team and all other teams the best! I know we had put in a lot of effort and thanks to Ms R for all the help!

Relatives and friends have been asking what's my plan after getting my diploma and here goes.

As for studies, I have several options in mind but I can only assure myself and the rest of this in two years time. I know, I know, all of you are excited to know. So am I. The world is so vast and loaded with information it's so hard to tell which is the best to pick up.

My friend Khai was so funny.
'Eh, can you enter NUS?'
'Duh! When do you want me to come and crash in your lecture?'
'No, I mean can you even enter NUS like enter, enter?'
Followed by hysterical laugh.

Another one was Syaz. I don't remember how this came about but it did.
'I can't imagine you in prison... With your sanitizer, tonnes of packet tissues, moisturizer and whatnot...'

Khai just had to add in.
'Haha! Imagine he sleeps, he has to sleep on water bed mattress...'

And I love to go with the flow, albeit marinated in half-shame.
'My prison mate would love to sleep with me rather than sleeping on hard ground!'

Jokes aside, systematically, after getting our diploma most of us boys will spend time with rifle and probably nature for two years - also known as National Service. So gotta be prepared!

Career wise, probably I will not be doing the same thing I had done for the past three years. Would to love to try on something new! People have been questioning about my NAPFA and my medical check-up status. Who knew going for medical check up could garner you a degree of popularity? Anyway, I'm quite optimistic about this because from what I heard, you'll be well-taken care of. Speaking of hygiene and the allowances that roll in... ;)

Then comes the topic on my social circle and this is probably a period where the ratio of female and male friends are even out. For those who're probably jealous of me having more female friends than male, it's time for you to pop a bottle of champagne and celebrate your victorious, answered prayer.

If I let this 'What will happen when I'm ferried to Pulau Tekong' to continue, I might need to start a new book. So we'll see how it goes and take this step by step. Anyway, this doesn't come after graduation right away. There will be some time spared for me to do whatever I want!

So for the next two to three months, I will busy with school and other you-think-it's-trivial-but-important things. My final year project may have been submitted but the project doesn't end there. There's SPINNOVEX to attend as my project will be exhibited there and a couple of interviews. Wish me luck!

What lies ahead in 2011?
Since this is a new year, like everyone else, I want to start fresh too. This includes starting to know more people while doing my duty for the country, getting closer to friends and family and stay fit and I don't mean the gym rat way but that's mandatory to prevent obesity, but stay away from being sick. The list goes on and along the way you'll dig more.