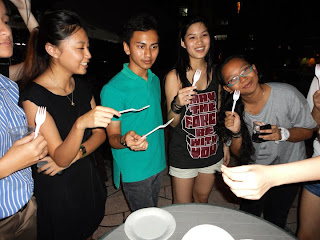 It wouldn't be right to end this music without decrescendo so we had a class gathering and work with not-so-abundant class funds. Because of public holiday, it's like having the majority of the city being asleep, even in the virtual world it happens.

We have to resort to buying our BBQ food and materials the traditional way - by using shopping cart. Not my way of shopping because you will have to browse every aisle to make sure you get what you need but do we even have much choice?

Some were stranded in school for interview, while some probably escaped (erhem!) the shopping part and just attend the party and of course some had their valid reason. It's okay, as long as you don't complain what there is not, otherwise I'd throw you into the pool nearby then.

Starting the fire isn't my cup of tea. I mean, I do know how to start the fire - if you're talking about the press-and-turn kind of gas, yes. Starting fire from fire starter and charcoal? Man, do I even live in the stone age? Kudos to the people who knows how to start the fire, I am amazed really. 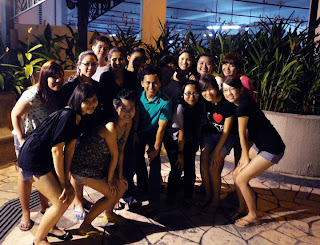 The BBQ went well, though I love the ice cream (I feel like eating again, Neapolitan) more than anything else. I still like the sausages (which is not burnt unlike others I've seen) and well cooked chicken.

My class is just odd, though in even numbers. Seriously, but they're all good.

Definition of limousine: Large luxurious car; usually driven by a chauffeur. (Check them out if you don't believe me)

So, if really that 'limousine' is a limousine, I've probably been scammed because I don't feel luxurious sitting in broken PVC coated seat, and being charged at a higher price for a vehicles that runs on cheap diesel.