Two days ago, I had one of the best days of the year. Two decades of living, and still going strong, and there's a long, long way to go.

Thanks to my family for the cake surprise, though expected, it still surprises me. Haha.

Syaz and Khai played a risky game. They came to my house at midnight, I don't know if they pressed the bell but I was rebooting my BlackBerry and was about to head for the showers until the phone had finished rebooting and right away I got a call from Khai. Guess what, while the phone rebooted, they came across my mind and I didn't expect it because I was tired and I thought, fine, probably exams season, should cut back on celebrating. I picked up the phone anyway.

So I opened and saw Syaz and Khai and I was like, woah! It wasn't long because I had to sleep early, thanks to test on the following day.

Test was horrible, but I know I did my best. Had lunch with Cassie, and swear that stall vendor is the most stingy vendor I've ever seen. Such a disgrace to my own community seriously.

That afternoon had a meeting Ms R for Final Year Project (FYP) report, somehow this thing still clings to us even after submission date, but it was all for the better. Suppose to meet Syaz in town at 2pm, and yours truly, being the VIP, was late.

Meeting started at noon. Report discussion till 1pm. Redid the entire report for 3 hours. See, the worse thing is to have the report, and to redo with existing report we have is harder than starting from scratch, but given the circumstances, like we have much choice? No matter, we did our best and we shall applause to our team work (Cass and Huiting). I could have excused myself from redoing it and meet my stranded friend in town but really, thank God there was Cassie to accompany him while waiting for me. I couldn't be more grateful. I felt bad then.

So, I 'limousine' down to town, and I should have taken down these two cabs plate number, complain to the media, and spam call all the cab companies to fetch me from campus and alight me at ION. Seriously, two rejected my destination. It's not even peak hour, it's not even change in shift period. Well, I didn't know they are not allowed to 'choose' passenger, especially sober ones in broad daylight until Syaz told me. When I arrived, I saw Cass first and she passed me my gift, and Syaz was busy window shopping at one of the Topman shelves. Pffft, I look myself in the mirror, I looked horrible, unkempt.

Cass had to go to meet her date, so the two of us decided to catch Black Swan. The most awkward show ever, but the storyline was good. I even wikied Black Swan while watching to check if it's a horror or what.

Had dinner at this Indonesian restaurant, forgot its name, but the Satay was good. Played Monopoly Deal and that was my first time winning a game but I think the card was not shuffled well Syaz! Chatted about myself the entire time - and Syaz bothered to listen. Even if it's my day, I felt so conceited - which is bad. You're still the best. 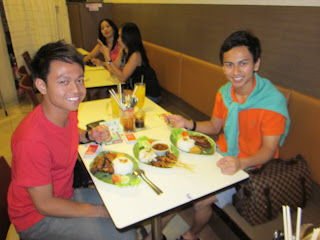 Headed back and halfway through I parted with him to meet Fiz and Nat.

So much for surprises, I managed to guess where these two 'surprise whisperers' are bringing me. Mount Faber - for I don't know what reason, then Swensen's at SIN for dessert. I've escaped from my karma of blindfolding them, thank goodness. They said there'll be a second surprise, but I don't think so. Inside joke: You guys are too loaded to treat me Swensen's. How much did you guys spend again? Hah, but it was fun and for the better too right! 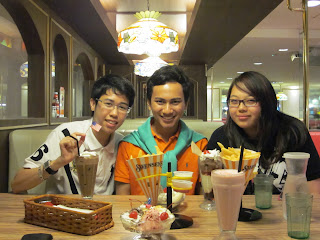 The day ended. Threw myself on the bed, I was so beat.

Thank you for all your wishes and gift(s). All of you are one of the best gifts I've gotten. Love you all. XO