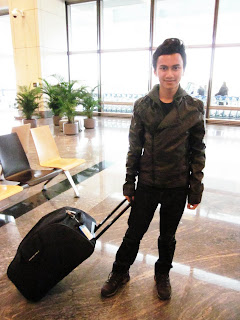 About a week ago you read about my dinner and dance, and the night cycling and the fostering of two adorable and a handful kittens and now I'm back closing up for the third month of the year.

I just came back from Jakarta last Sunday to meet my friends from Indonesia. We got close via BlackBerry Messenger but it would have not been possible without the introduction from my mum's friend. I appreciate this friendship a lot and hope this brings us closer together!

We went there together with our parents who went with a group of friends but we separated at the airport. F and D fetched us. How awesome to be greeted by your foreign friends at the airport.

We were there mainly for sight seeing and although this is not my first time being there, the same or similar places, I did not get tired of its beautiful sight because it was raining at several places that we went - not so heavy but it was enough to change the scenery to a cooler place. 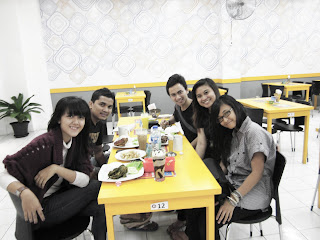 I was impressed with my friend F for being able to drive long distance without complaining being tired. Though I understand he didn't talk much probably because he was tired, he was a considerate, fast and careful driver! Salute!

What I like best is the food and one thing about going around with them at least you get to try real local food where other tourists don't really go. I do like going to places of interested but once in a while it's fun to visit uncharted areas where some would not dare to go.

So for my case we had a sumptuous meatball noodle, Martabak, and Canai. Although they may have it in a different name elsewhere in the world, trust me, food there tastes much better in their homeland. Haha, and we're not comparing fast food. I'm talking about real deal cooked food. 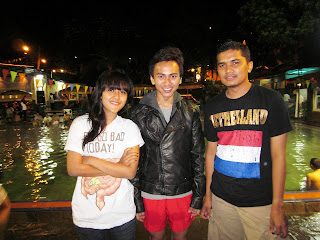 Finally I got to satisfy my craving for strawberries! Since strawberries here are sold at the price of a MacDonald's upsized meal at the size of a six pieces nugget box, I got there at more than half price, twice the quantity. Imagine your 'tapau' rectangular container (but 20% bigger) full of freshly plucked strawberries at 15,000 rupiah for two! Now, go to any market and check out the price and multiply by 6,900 rupiah (the current rate), I felt so cheated buying fruits here. Then again, you must understand we don't have strawberry farms here!

It is almost impossible to diet there when the food is cheap and they have a variety of food that you'll be spoilt for choice. For more details, why not book a flight there this instant and have a look for yourself? Haha. By the time I landed in Singapore, I was very, very, very tired. Dead beat was an understatement. Toot tired to do anything but I forced myself too because my own laundry has been piling like an Everest and I missed my babies.

Rotted at RDA, though I enjoyed looking at those disabled children ride horses and they looked so happy on it.

Wasted two hours trying to sleep but I didn't dare to fall to deep asleep in case I drool, or open my mouth while asleep or snore. So I was practically half-asleep all the way and the sun was burning hot. 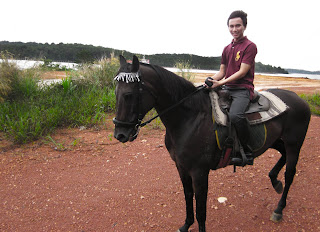 Headed cross borders and R and I went for horse riding, the very much anticipated activity of the week after vacation. The cab driver was awesome. We talked a lot along the way, so I felt a little less sleepy. Very charming, friendly, and courteous.

I can canter for nuts. I can't gallop but probably be galloped on, so throughout I trotted Zeba (the name of the horse). The good thing taking things steady on my first time riding on a horse, I got to enjoy the scenery, see Pulau Ubin, get away from the city buzz and fear the appearance of my pet peeve among the bushes which is a lot scarier than being afraid of falling from the horse. 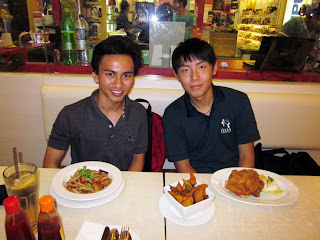 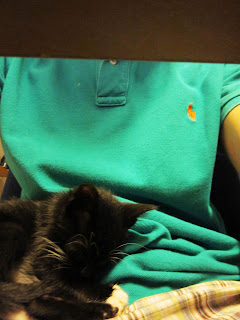 We had dinner at Season's and headed back home to fetch the two bloody kittens. S pooed in the cage on the way home and I had to go through the trouble of washing up the two of them by hand - you can't simply put them in the washing machine and tumble dry them, sadly. And this happened before I even able to catch my breath and check my mails. Pfft. Well, this is part and parcel of having kids. I do really think taking care of a baby cat is as good as taking care of a human baby. It's tiring, yet fulfilling. I won't say it would be rewarding because what can you do with cat's stool?

So I heard while fetching them they had diarrhea but turns out they were both just fine (today). They had it probably because they were sent away into a new environment (again) so both of them were stressed out adapting. Now that they are back home with their papa, they are damn, damn mischievous and cute. Both had start climbing my office chair, which really get onto my nerves because either one would come up to sleep on my lap while I'm blogging this instant!

April is coming soon, have you thought of any April's Fool joke? Honestly I don't see the fun fooling people on April's Fool Day. Whatever you're planning on, just be careful. Play safe. Haha!

Newsflash: My annoyingly sick in the head neighbor who deserves to be admitted into IMH (Institute of Mental Health) and be handcuffed on bed finally moved out. The devil who came over to ask for rice (laugh all you want but he did), to torment, insult, and almost assault my family has no balls now to face reality that he and his family deserve to be ran over by an accelerated aircraft. Poor lonely house husband, non of his family members allied with him when he came over. It was one against 5 (then). Oh, that's right, the rest were all pussies. Reality check, you will always fall into the losers pit. Unseen, untouched, unwanted, and nobody cares if your house burn down to zero because you're simply and outcast.

If it had not been because of you, my late grandmother would probably have seen me graduated and see me drive.

Have fun refinancing the new roof above your head. Your funeral will be my Chingay.

To the new neighbor who will be living there (which I don't know when), conflict(s) can be settled with hostility... With you end up moving out at the end of the day. Welcome to your new neighborhood.
Labels: Asia Food Travel