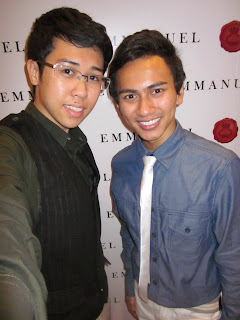 Speechless. Is all I can say for the Asia's first Men's Fashion Week. If there must be more of it, it better be in Singapore.

I was invited to attend several shows, thanks to all those who made it work and successful. You do not know how much I appreciate it.

So while I was head over heels for the shows, I was stressed out! I know, I know, you'd say it's lame to stress out but I have no idea on what to wear even if others are wearing casually or in not-so fashionable outfit, it's either they already did their best or they know nuts about fashion or they're probably fashion mogul in disguise. You'll never know but me being me, I'd rather do my best in looking as fashionable as possible. 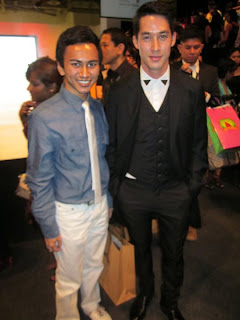 To be real honest, I know little about style but thanks to friends and media, I have a greater exposure to fashion and styling up. Otherwise I'd walk around in baggy plain crew neck shirt that has Smurfs on it, and oversized jeans that might attract comments like 'Trying to save?' or something of that sort. Whatever.

Being the first time attending runway shows in the first Asia's Men's Fashion Week is a great honor. I felt totally like an alien like in a good way and I was scared that I might offend anybody B-y and then get into a B-h fight. Thank God I didn't but if I did, that would be a ticket for me to get the media's attention eh?

On Day 3, these are the shows that we attended to: 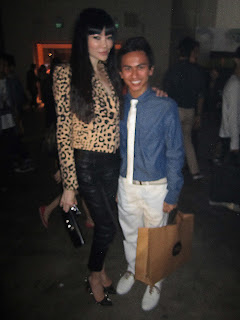 On that day I got to meet VJ Utt who was very, very nice and personally gave us invitation to the MTV Concert Rock It With Utt - which I saw being promoted via his Twitter, and Bryan Boy  (one of the famous fashion blogger) who sat across us, and we got to meet the models after that and had lunch with them! Trust me, models are not as shallow or as dumb as you think. Start talking to them and they speak like Wikipedia.

I was dead beat that night, but I enjoyed myself, very, very much.

The following day I had to wake up real early to meet my mum's friend from Indonesia. We fetched them and went for lunch. I had chicken bryani and I never felt so full before. Can't wait to meet them again, hopefully real soon! It was a hot day and I had not prepared for that night's fashion show. 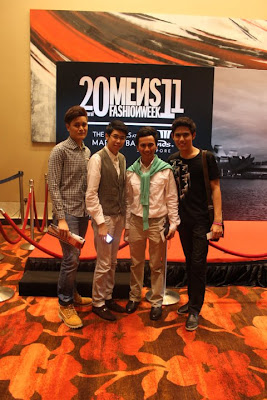 I was discussing with E on what to wear since H was asleep - in broad daylight, when suddenly he called me for the earlier show. Without further ado, let me introduce you to my chaotic weekend. I wasn't ready. Camera not charged, BlackBerry half alive, outfit not so confirmed yet, and to choose which shoe to wear is a dilemma. I don't even know if I should use hair wax or gel!  And the kittens were playing in my room I almost accidentally kicked or stepped on them - but I didn't but it got me all freaked out especially there's a pile of laundry on the floor which was yet to be washed.

Thanks to my brother who polished my last minute shoe, opened the house door so that I can straight away go out, got me an electronic hand fan and play with the kittens while I was donning myself. So if anyone were to question my wardrobe, this explains. 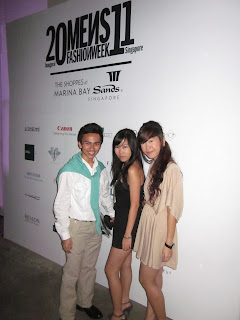 So here are the shows that we attended on Day 4:
While we were having dinner at the backstage after A. Testoni's runway show, I asked a friend of mine who invited me if I could bring several friends and he said 'Sure, bring as many as you want!'

So there goes while having dinner we chatted and scrolled down my contact list and see who's not busy and could make it for the final show of the day - finale has to be grand with friends. 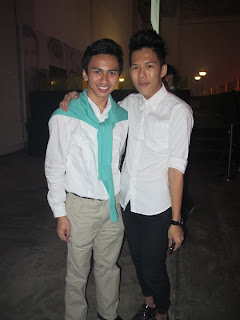 I am so, so grateful that they could make it. A and Z. A was my childhood friend - I remember slapping him in primary school which created a hand mark on his face for being annoying. I hope this compensates for what I did. Heh. Z on the other hand was known since two years ago, from A. So I was surprised to see her.

There was another surprise apart from bumping into my secondary school friend Z, and my Indonesian friend P. H nudged at me 'Eh, isn't that Q?' and I was like 'Where? (and when I saw his posture and face from across) Oh my god!' - in a good way. I dialed his number and turns out affirmative, it's Q. I'm so proud of H for being able to tell my friend from far. That's what friends are for - on a lookout for each other in so many ways.

I hope all of you are happy as much as I do and enjoyed each others company. I'm grateful to all of you of who're able to make it to accompany me - hopefully not accompanying for the good times only! 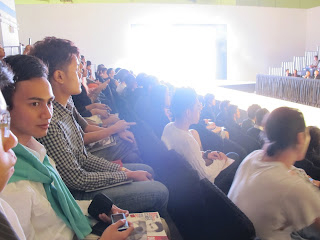 So there was a controversy and comments people saying the event was not well organized, or rather a flop. I don't think so but sure there would some discrepancies. If you think otherwise, climb up to the SkyPark, say your jealousy mantra and jump down - hopefully to the ground because I feel their hard work, and a venue too big doesn't mean it's an epic fail. Don't complain again if the next venue got smaller it's gonna make you sick. When people make space, appreciate it. Hey, just like you, I'm just saying. Peace out!
Labels: Events Fashion Fashion Week Fide Fashion Week Style