P/S: You minors who're reading this, these are not examples for you to follow but lessons for you to swallow.

By now you would have seen there are several changes to this blog. Not much but just so your navigation will be at ease, know that all the images on the right bar is functional. Click and explore.

So, what you missed in the previous entry?
Here's my primary school life at a glance.


I had to change the music due to copyright issues. Pfft. There's so many things about primary school that I would like to talk about, and I don't know where to start!

When I was in primary school, we had two sessions: morning and afternoon. I always dread the afternoon session because it's too hot that I'd sweat by the time I reach school. I hate morning session because I have to wake early in the morning. I took the school bus when I was in primary one and I miss it a lot. It's so convenient! That wish didn't die out even when I was in polytechnic. Fat hope burst after graduation. I gave up hoping for anymore school bus.

I had a dream of becoming a prefect. Right, laugh at this. When I was in primary school I wish I was a prefect but I was quite notorious. What are the odds? Erhem! Well, I had a tough time. There was this one time when I was in primary two, I kissed a girl on the cheek. The news spread like flash fire and it was bad. I was like damn young! What I had in mind was this:


But neh, it just had to backfire, just because the school ain't European enough. Clearly it would have been different if I were to be at a European boarding school or something!

Newsflash,  I hope this spreads like flash fire too: I've grown up and I'm not a pervert. Let's clear the air.

Along the way, we had this annual event, Sing Singapore. Nobody does better than we do. Pasir Ris Primary School isn't only the best hub for learning in that town but we are also the hub for festivities. In 2001, the PRIME construction began and some of us had to move to temporary block. During the Sing Singapore period, we had a fund raising event selling spices (I know, it's crappy but for the better) to the neighborhood. Being the active student I was, despite not being a prefect, H (if I'm not wrong S was there too) and I made a door to door visit nearby to sell spices like cinnamon, clove and other spices. I think our cute faces and pleas made people buy our spices. It was so fun! Little did I realize, I started doing sales that young!

They have Sing Singapore up till today. Then on we would spend time rehearsing, and practicing our moves, choreograph and all. Our beloved teachers will always have this creative ideas that they apply on us, and we're like the guinea pigs. It's a wonder that we manage to have work-Sing Singapore balance. Not everybody gets to participate by the way. There's thins thing called qualifying round which will be shown during assembly prior to the season.

Newsflash: Sing Singapore isn't a waste of time and money.  Apart from 'social cohesion' you're planting beautiful memories into their mind.


If anybody thinks Sing Singapore is a waste of time and energy, we are one of the best primary schools in Pasir Ris town. Oops, correction. We are the best, do thy research

The batches that participated in Sing Singapore in the final round were lucky because during that time they produce VCD for the event and that's the first. Their motive was to raise funds for the PRIME project because they decided to have the optional add-ons to the school which then require more money that what the ministry provided for. Buying the VCD was worth it.

I had to attend remedial classes because I was particularly weak in Math. That was like one of the most terrible subjects and I've always suspected it's a Malay thing. Well, we invented the angklung but not the abacus, what's left to say? I'm being impartial here but according to statistics, it is true. I have to show this valid statistic otherwise all the 'makcik' will go after me. For the record, I was one of them, but I made a breakthrough in PSLE, thank God. In primary two, my teacher called out names to recite the times table and I always avoid her eye contact by hiding behind my friends head. It won't work now because my head got a little too big than the rest so I came up with a new tactic. Hush!


Primary five was a lucky year for me. I got a 4th position in class in terms of academic, and I did quite alright relatively for all subjects. S said because I was in the last few classes (where most were playful). I am still glad I got an award on Prize Presentation Day.

On top of the award I receive, I was the Mr Jalan Bahtera (2002) for my primary five camp. It's like a compulsory thing for us to attend this camp. I was the quite-known one in my group (I wouldn't say popular because I'm not) - Oceania and they picked me for this challenge. So F and I were sent out to use those recycled materials as our outfit and impress the rest. Guess what, we won a plastic crown! We are the champions.

In primary six we had to attend to a lot of remedial and supplementary classes. I even had a tutor on top of that - yeah right like others didn't. Our supplementary classes would be in the afternoon usually and during the break before the class starts we went over to the mini mart and bought instant cup noodles. It's a wonder why my hair doesn't fall then. Due to the renovation, we love our temporary classrooms because it's air-conditioned! All the more reason to bring fur coats to school...

Usually during our supplementary classes, most of us will be tired by then, and naturally, we'd be sleeping with our eyes open staring into thin air. For once, we were guppies.

When we had free time after supplementary lessons, H and I would hangout at the playground which had a swing on it and we played games like Blind Mice, Ali-Pom, Marco Polo and Crocodile. Of course there were other players around and we didn't need Facebook or Friendster to make new friends. There was this one time, it was raining heavily but we continued playing. We played under the rain, wet! Try doing that now and stand a chance getting free chemical peel.

Newsflash: I participated in a singing competition when I was in primary four and I was totally nervous. That was my first solo performance! Agaknya betul cakap arwah nenek saya dulu, kalau saya nyanyi, katak pun boleh berbulu. Haha! Epic.

Honestly, if you ask when was my most bimbotic moments, it would be when I was in primary school. Looking back how I was makes me feel like shying away but doing it won't change a thing. For the love of God, revive the alumni club!

So here's the thing. Most of you would have heard about S and H a lot lately in the news. As in my news feed! Who are they? Sometimes you wonder, how did it even started? And after tough thinking I remembered mine vividly. 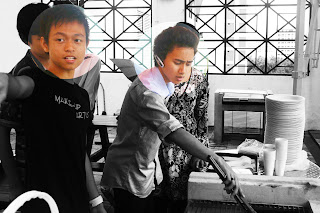 I wasn't as social butterfly as I am now trust me. Making friends hadn't been the easiest thing for me at that time. Even up till now, it's hard for me to assimilate to a new crowd easily. Everybody has their own obstacle and I've always wondered how they overcome theirs.

Anyway, it was after my madrasah that morning - since my circular school is in the afternoon. Somehow I managed to pull myself away from the bed and go for my religious class and went back home. But I just had the urge to buy something at the mini mart. That's when S talked to me saying we were from the same school and Malay class and whatnot. While we were talking we realize we have the same interest, and happen to be in the same Malay class - you could imagine what could happen. I remembered we love having this multi-colored ball pen which only sells for like $1.50 and it feels good when writing. I was astonished to see the similarities in our handwriting. Big, and tidy. And we love pressing while we write to the extend the paper becomes crunchy. It really feels like braille when you touch from the back of the paper. Or rather, it feels like hard work to it.

Even when we parted during secondary school, he gave me the greatest revelation when I was in secondary one, and that brought us together again for the next four years - and counting.

Oh, speaking of crushes. It's an exclusive piece. 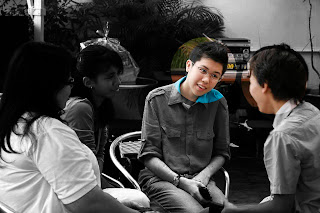 Well there's a reason for calling him a holy friend. Last time, when I was like primary three/four he loves teasing me and I got really, really annoyed. It stopped after some time, probably too tired running circles around me. Then we met again, and this time it was for Sing Singapore. We were from different class but because of Sing Singapore, we combined class to form a battalion or warriors to clinch the Sing Singapore cup.

Anyway I called him holy because there was this one time his head was shaven. I have no idea why because I wasn't close to him. Until after some time someone told me he performed the small haj.


In primary five, we got closer because of our similar interest. S, H and I got the same interest in music then. H and I would meet up and sing karaoke songs, and do silly parodies that you can't imagine. Don't worry, nothing obscene. This involves baby powder (I swear it's not used on us) and construction ladder and table cloth. It was mad funny and those, were the really, really good times. If I remember correctly, that was one of the year I laughed till I went breathless and couldn't control my bladder.

After primary school, we went different ways. I know, it seems like the friendship curtain is going down but neh. He was the one who kept calling after primary school to ask what I was doing, how was my school and all. My parents does that too but it's a different matter for friends.

I am indeed grateful for the wonderful company I had in primary school, from the meal worms experiment, to the terrifying myth on the haunted piano in that school, to the eye exercise we do in school after recess and to the great lasting teachers we have. Gosh, I really miss those times but most of all, thanks to S and H for such a wonderful time in primary and post primary school. You are the best! I've got your back if you need anything.

P/S: You minors who're reading this, these are not examples for you to follow but lessons for you to swallow.
Labels: Nostalgia Personal Throwback