How Kittens Annoy You 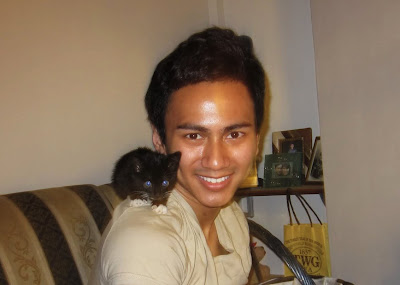 My mum and youngest brother love cats, so do I, except for my second brother and my dad who are always irked by cats for passing by without warning and the touchy effect it has on their skin. Whatever.

Nine weeks ago (supposedly six) I fostered a pair of the most annoying kittens ever. They are annoyingly cute. I had to ask my dad for the green light if I could foster them, who cares about my second brother who tends to lock himself in his room, and my mum was simply delighted to have them and sympathized by the fact that they might be terminally sedated if no one nurtures their growth into a fine adult kitten. My youngest brother didn't really care at first.

They were named Scrumptious and Snowflake. Now, meet Gucci and Prada. Hehe!

I was extremely roiled initially. Trying to be courteous to my dad and my younger brother, I put them in my room and on their first night, they pooped on the wrong spot - on my carpet and it stank my room badly. Especially when it's air-conditioned, you wouldn't want to imagine the gag I had on my throat being awoken by that smell. For the next few days the same thing happen, and they seem to be happy about it. How can I not be annoyed and get all angsty? I had to sleep late entertaining them, and wake up early being their secretary answering to their nature calls. Life was a turmoil then.

One day I cleared all the mess in my room and got a new configuration - thanks to them but being the paranoid person I am, I imprisoned them in the toilet, only to let them out when I'm in. My kittens were very lucky when I didn't put them out while I was in the shower. But I had this thought a hidden camera was put in the kittens eye or something!

They still had their diarrhea, and it was quite persistent until some time I realized their stool are much harder than the week before. Still, they were imprisoned for committing a crime - pooping at the wrong places and creating a mess out of it.

After some time, my parents asked me to let them out, which I intended to but not too soon because naturally, kittens are territorial animals so I'd like to be sure they would make our bathroom their bathroom as well. Miraculously, they did. I'm so proud of them. 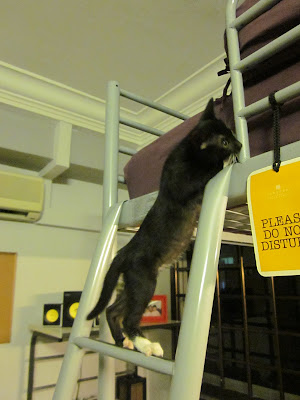 Showering them was almost impossible. I had to withstand the scratches they made from showering them, give them food the first thing in the morning, and clear the tray after pouring their feast into their bowl. It was funny how they would fight for more food and make a mess out of it and ended up eating from the floor. This hygiene freak has zero tolerance for mess - which explains why I'm rarely in the living room. After eating they will drink up, and head to the tray to dismiss its missiles. It's a routine. Imagine this on a scale, then times two - because they come in pairs.

My kittens are the most sanitized kittens I swear. Their tray in tip-top condition otherwise I wouldn't even want to step into the toilet. And that's the first thing I'd do each morning when I woke up - clear their tray. Since they are nocturnal animals (in case you don't know) their happy hour really starts at Clark Quay's happy hour period. They were having such a good life running in and out of the study room, making noises like tap-dancers chasing each other.

Some of my friends and relatives had a good play with them which is a relief because for once I can catch up with them, and get this kitten to meet new people. Otherwise they will become shy - not my type of kittens. These kittens really like to hangout on designer items hence the name Gucci for the male and Prada for the female. Despite their name, they are pretty unglamorous at times.

Whenever I cook, or bring some hot food into my room, it's like a call for their in-room dining. They started climbing on my office chair, or my jeans (when they were really young) and try to steal my food. I had to resort closing the door and let them meow in front of my room. Playing the pity card, they will sit in front of my room until I opened the door.

Gucci had lice on him. I don't know how it came about but definitely from the dusty environment he had but somehow only he has lice and not his sister. That's just odd. He started scratching himself and after like a week we realize his hair was thinning. Who knew animals could worry you so much. I'm just worried that lice might just be on me instead actually.


Now that they're familiar with the house and their surroundings, god knows how impromptu their sleeping habits are. It started questioning if my kittens here are the real territorial cats and not some kind of non-cat breed? First, they slept on the wooden chair, then under the sofa bed a few days later, then at the ironing board (it's still a wonder how they got up there), then on my table. So if you were to ask me where did they sleep, I'd say everywhere. I gave up making up their sleeping basket because they no longer sleep there.

There was this one time, Prada really freaked me out when I saw her sitting by the window ledge like a Sphinx. I got so scared I had to think how not to scare her away in case she fell of from the ledge and dropped from the penthouse. That was like her near death moment. 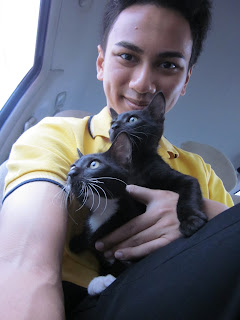 They were always hungry and greedy when it comes to eating and because they eat and pooped a lot, I had to make more than a trip to SPCA to collect their food and sand. I had to cab back because the items were heavy and I got really nettled because it really went against my principle not to spend a single cent on and for the kittens because we have provided a roof, and a place to stay, it's only right that everything else comes conveniently and handily but I guess I couldn't rely on that.We did buy food for the kittens for the love of the kittens after all.

I even had to send them to the vet for the vaccination and why oh why SPCA has to be so far? Thank God my dad was able to send me and these two Blackie Chans for their vet appointment.

Who knew these kittens are musically inclined, probably they heard me sing every single day. I slept with them last night since it's the last night with them and they were busy running in and out, and around the sofa bed making noises. Rubbing their body against my face, and walked on top of me, pressed the remote control and switched on the TV. It was so bright I had to get up and turn it off. Then, seeking for a spot, they sat on me, and in between my legs on the comforter. I was so restrained, I had to push them aside. 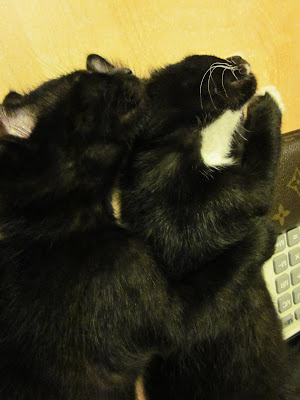 What breaks my heart beyond capacity is letting them go. Returning them to their rightful place (SPCA), having to say goodbye to two silly creatures whom I kissed every single day I when I got home, teased them, played with them, and carried them where ever I go around the house like a puppy. Laughing at their funny antics like how Gucci jumped when its tail got caught in the fan - a repercussion for climbing hazardously, and how Prada would follow a string or even skipping rope, and how they would hug each other when they sleep is just so sweet.

Even my dad and second brother plays with them after some time.

It made me cry at heart to feel so annoyed having these two rascals around and the trouble they made me go through, but at the same time, taking care of them like they were my babies, not wanting them to die, tortured, or abandoned by their future owners.

Oh well, attachment towards them is inevitable and I know this day would come where I feel sobby. Of course this despair would fade away but they are my first land creatures I have as a pet. Even tonight when I got home, it felt awkward not to have them running to the door when you get home, and it feels a little odd now that I don't have them to carry around. I've lost my Gucci and Prada!

Thanks to the many who made life taking care of them less of a burden. I owe you. This blogskin will be a memorial of them. Thanks R. Wong for the two kittens! 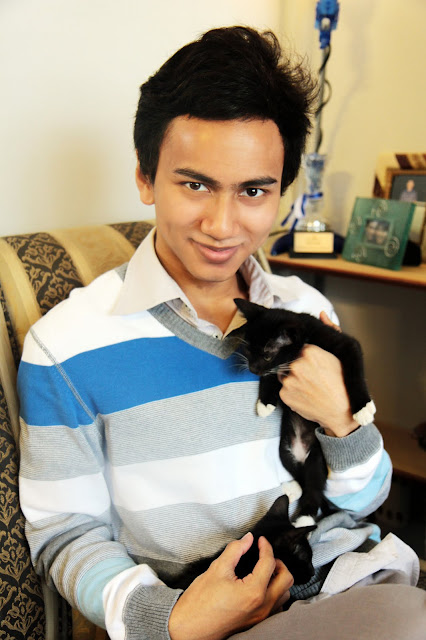