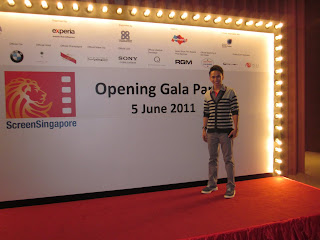 For the past one week, Capella Singapore has been my second home and I made a new adopted family stood by people from different background. People like Wai Yi, Sham and Lance has enlightened my life amidst that busy week. Wai Yi is like my godmother, Sham is like my godsister, Lance is like my godbrother. Since the cold morning of the first day at ScreenSingapore, till the last red carpet I went, they never fail to make me look forward to each day, and not wanting this to end so soon.

Yeah right! So much for wanting not to end so quick. I've been dying throughout the week walking around trying to find worthy pictures, finding interesting stuffs, and survey the resort. That's right people, Capella Singapore is the official hotel for ScreenSingapore and that's where the media center is located: right at the heart of Sentosa Island. Being the heat intolerant I am, I spend most of the time indoors and emptying as many bottles of water as I could while snapping away. 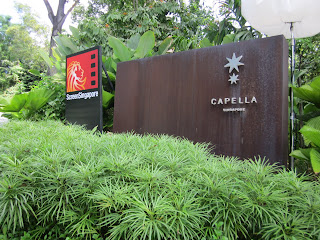 So here's some things about Capella Singapore you might want to know.
1. Capella luxury resort is an extension of two old bungalows named Tanah Merah, where the lobby is.
2. You don't have to walk around the estate by foot. This is one of the best hotels that says your foot is not meant for walking. There is a 24/7 buggy service upon request.
3. It's almost impossible to get a mobile reception there. Don't blame on Capella Singapore, blame your service provider.
4. They have a 24/7 free WiFi service at The Club and the estate. Don't fret about internet connection. It is so reliable.
5. Parking is not cheap. Duh, but they have a shuttle service.
6. Capella Singapore has extraordinary art pieces lying around the estate. Not for grabs.
7. As luxurious as they are, they embrace wild animals by allowing peacocks to roam around. Many would have fenced them away.
8. Bang and Olufsen, and Bose is only a basic feature of the room and facility. There's more to casa de luxury.
9. Their muffins are to die for. Hard and crunchy on the outside, soft and tender on the inside. 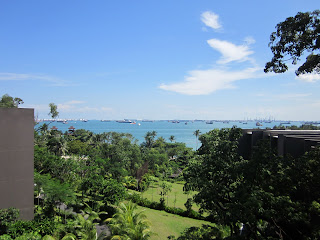 That somehow wraps up my experience in one of the most luxurious hotel in Singapore - Capella Singapore. That explains why I love hanging around there so much because on a normal day, I could imagine that place being so serene. Just don't look too far because the downside of having a sea view is that you will see an industrial island across and tonnes of ship in between. Totally unsightly. 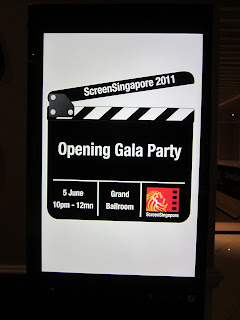 I was walking to the ballroom to attend the Opening Gala Party and I saw a board that has the event title on it. I thought it was high quality printing they produced and thought how much they had spend on those high quality printing. As an Events and Project Management graduate, expensive signboards and basic non-ad posters are the last thing you want to spend your money on - won't deny it is still essential for direction. I was surprised to know that Sony LCD was used because you wouldn't have any idea that that thing that you see was digital and not printed. It looked so real! Anyway, Sony is the sponsor for those LCDs that you see.

All these while I'd brag to my friends that I take the BMW to school every single day but they had no idea until I said that's an acronym for (B)us, (M)RT and (W)alk. One of the most amazing experiences I had in ScreenSingapore was to hop on to the official automobile of ScreenSingapore, the BMW. That was my first time in BMW. It feels different. Having ridden on several luxury cars, nothing compares to BMW 7-series. There was this one time I went to the BMW World Asia in 2010 at Marina Bay Sands and I was gobsmacked by the amount of energy and research that they put into their production. Today, I felt blessed being given the opportunity to get the real BMW experience. They say, nothing works and feels better than trying on it yourself. 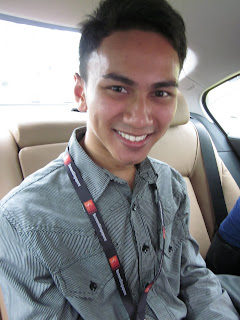 Here's some fast facts about BMW that I found out from one of the drivers and some from personal research.
1. The blue and white color you see in the logo is of the Bavarian flag. Which brings you to the second fact.
2. BMW stands for Bayerische Motoren Werke (Bavarian Motor Works)
3. BMW is pronounce as bee-am-vee in Germany. Beemer is one of the many slangs that I'm still used to.
4. The common model series they have are 1, 3, 5, 7. Series does matter when it comes to class comparison.
5. BMW does celebrate April's Fool. Every year they come up with funny and intelligent April's Fool advert. 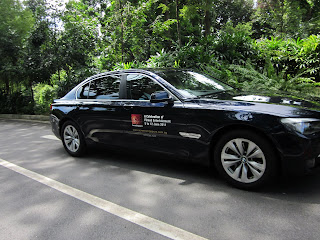 I kind of look forward to own a car. I am so fickle about this. Every time I walk in luxury hotels, or even furniture stores, I've always imagine of having my own home and fantasize the things that I could do like cooking, sleep on my water bed, watch television from my very own state of the art TV, and even hosting - something that I'd really love to do. Now that I've ridden on a SGD$300,000 car, I feel like owning a car now and gosh, imagine all the places I could go with it. 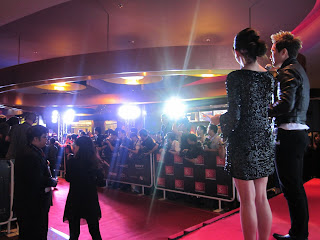 The movie premiers were held at different places namely Golden Village (Vivo City), Cathay Cineplexes (The Cathay), and Shaw Theaters (Lido). In one of the talks that I went, one of the speakers mentioned about giving a wholesome experience to viewers where quality should not be compromised. He's saying this in light of the causes of increasing piracy. He was talking about service, and technology and I thought he was right. I mean these days I's prefer digital format as compared to the normal one. I'd rather watch something that is crystal clear than any movie that has noise and frequent black dots appearing out of the blue. It's pretty distracting and for the same price, why not go for the one that is more pleasant for the eyes. Touche?

On my last day, I went to the VIP hospitality lounge and the make up room. It didn't occur in my mind to go there despite having the access to all areas until the organizer from the make up room came over to fetch the plate of croissant and chocolate muffins for the make up artist. While helping her out, she told me that Jason Spevack will be there. I had no idea who he was because honestly, most of the time I am oblivious of the actors and actresses name and just associate them with the cast name they are known for 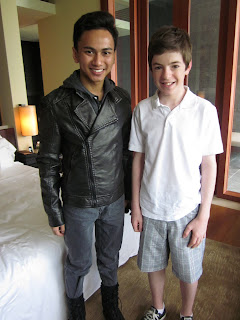 Anyway, I just hanged around the make up room to see who is this Jason Spevack. Probably a haughty American actor bossing around what he wants, despite being a minor. The door bell rang and to my astonishment, I remember where I saw him before. He was one of the supporting characters in Ramona and Beezus led by Selena Gomez!


He is personally adorable, cute, and of course, white. This Canadian actor checks his BlackBerry occasionally probably for new BBMs and let the hairstylist do their job. Even when they asked royally what kind of hairstyle he wants, he's casual about it. After his hairdo and make up, I had the time to interview him before any one else from the media. He was really nice.

Throughout my journey through ScreenSingapore, I've met a lot of nice delegates, whom most might have thought them of as aggressive, not-so-nice, bossy and arrogant. In fact, they are one of the nicest (and yet important) people in the entertainment and filming industry that you will see and no, not only because they have name and pride to uphold. You can just feel the genuinity. They are not like 'some' local celebrities or producers who pays for entourage more than what they get.

It was an honor to talk to one of Greg Coote's daughter. She's so pretty! Greg Coote was one of the financiers of Avatar and was awarded the A.M (Member of the Order of Australia) for his services to the film industry and the community. Of course, there were many others like Jon Landau (one of the producers of Titanic and Avatar) and local producers like Kelving Tong, and familiar faces from Men's Fashion Week like Dr. Frank Cintamani.

If you ask me if ScreenSingapore rocks? I betcha!

"ScreenSingapore will debut as an international cinema event offering policy makers, industry buyers, sellers, producers and creative talent from all over the world a platform to exchange ideas, business opportunities and showcase their product. Leveraging on the growing interest in Asian content, the very strong theatrical marketplace and Singapore's position as a globally connected regional gateway, ScreenSingapore will reinforce Singapore's position as the global media capital."
(Adapted from: http://www.screensingapore.com.sg/)