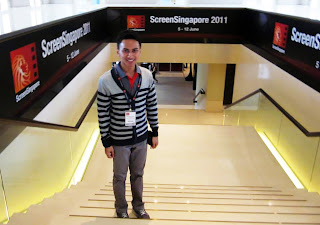 Throughout the days in ScreenSingapore, I managed to attend some of the 'In Conversation' series and workshops organized in ScreenSingapore. These fringe events really help a lot of people in the film industry world. I personally feel that filming industry is a niche market of entertainment industry. Filming probably comprises the majority market alongside with the music industry because the music industry reaches to both consumers and film makers who needs music for their films. I don't know, let me make a disclaimer here. All these that I have are just thoughts and opinion, nothing ever factual so I don't really have any trouble of you disagreeing with me.

In one of the talks that I went (honestly I don't remember which talk was this from because there were too many and it didn't occur in my mind to share it) here are some pointers that I managed to get. The one in bold is what was said that I heard in the talk. Things were really fast and I only have two fingers to type them down in my BlackBerry. If only I know how to write shorthand...

"Small sales agent company has lesser films to market."
Small sales agencies company definitely have small  number of films or rather small budget films to market because for one thing they are a small company. Naturally you would think taking your cheap film to a big sales agency would help. Just like this analogy: would you send your child to some school with low education investment(s) or low budget education when you expect your child to be a high paying lawyer or doctor? Of course not. However, the upside of getting a small sales agency may mean they have their resources targeted on those films they have. Which means their energy and efforts are concentrated on that several films they have. Back to the the 'child' analogy, because the intake would be low for that small school, they might as well concentrate their energy on their less than a handful students. Think ratio.

Sending your low budget/new movie to a big agency may be a grave mistake for your movie. One of the reasons would be you'll be paying probably more than your film production budget for marketing, and you're competing for their input with other bigger movies. It's like sending your child to an independent school, to compete with the big guys whom your child can't even beat.

In a nutshell, big or small, it does not equate to their potential to sell your film, but rather one has to choose an agency depending on their budget, storyline and casting. Getting a big sales agency does not mean your film is going to sell that well.

"Nationality of agents doesn't matter."
One must not see nationality of an agency as a hindrance when it comes to choosing a sales agency. It does not mean that the foreign company is not gonna sell your movie because of nationalism.

One living example is the award winning Japanese film Departure. This film is purely Japanese. From is director, to its cast and yet managed to gross out USD$61,010,217 as of 2009, in Japan. That does not include sales from the other parts of the world! Better yet, It won the Academy Award for Best Foreign Language Film at the 81st Oscars in 2009. Their sales agency comes from the other side of the world: Britain.

"Some films are hard to sell while some are easy."
Naturally, films with a good cast, or a good storyline are easier to sell. A slow story like Eat, Pray, Love or The Tourist would sell with actresses like Julia Roberts and Angelina Jolie but would it sell if it is acted just by your pretty neighbor next door? People would still watch if they had read Eat, Pray, Love, but I personally wouldn't watch The Tourist if it had not been for Angelina Jolie.

Good storyline like Avatar or the Harry Potter series didn't have a popular casts (or that's what I thought at first for Harry Potter), in my honest opinion. Throw me eggs for all you want, but I don't know who the hell who these casts were until I watched the film. Besides, these movies are backed by dedicated producers, great effects, and demand. So in fact, most of them turn into stars because of the movie and not vice-versa. Seriously, would you know Daniel Radcliffe or Rupert Grint if it had not been for Harry Potter?

"Resources are finite."
The trouble sales agent might face are probably time and of course money. Both are vital to market the film in my opinion. They have got to pick the right time to market, and make sure they have the money they needed by the time they launch the product.

Since time is limited, sales agencies have got to ask themselves what is the proportion they are willing to give on each movie that they are going to sell because you can't concentrate all your resources on one film and abandon the others. There has got to be a balance where you put them.

Sales agent usually have a mixture of films that they hold on to. Some are good, and of course some are not. Where good films are concerned, it's clear that they may sell like hotcakes which means the input may be less compared to what they will be getting out of the film. On the other hand, extra resources may need to be pumped to movies that are not so popular but probably good enough to make sure they get some money out of it too.

What I mean by poor movies here doesn't mean they have a poor storyline. Sales agents got to make some money from the well to do films to market the poor films to the community - that has morality or universal message to bring to the world.

This is all I have for now. As I said, this is more of an opinion, observations and not facts that probably need to be backed by some data. Read with caution, thanks!
Labels: Entertainment Events Exhibition Film Festival ScreenSingapore Thoughts