I set my expectations low: poor benefits for people in charge of the media like us. I expect some put out but I was wrong. Ms R and gang definitely did not trust me by asking me to come way, way early. I think Ms Ching just woke up when I pressed the door bell of the media centre.

Personally, I think Sentonsa Island has never, ever been convenient. I still don't understand why do we have to pay to enter the island once named so ironic to its modern name: Pulau Belakang Mati. Dead Back Island. Call me a complain king, but try putting on my Docs on a rainy weather. On the other hand, I'd appreciate that some parts of Singapore remains inaccesible. It gives it an exclusive edge. 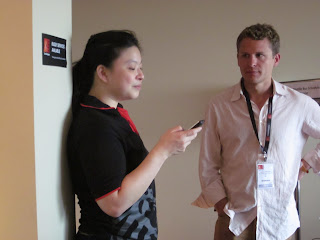 My morning in ScreenSingapore started with personal briefing by Ms Y.E, which I like. I think my absence was a blessing in disguise. I'd rather have a one to one briefing, communication so that my doubts are cleared without embarrassing myself. Who knows, I'm fond of asking silly questions.

Since I am way early than anyone else. Even the shopping malls are not open yet, I headed to the buffet for breakfast. I was spoilt for choice. the dessert was cheesecake which is one of my favourtites, and the muffins are to die for. The muffin pretty sums up the day I had. Hard on the outside, soft on the inside and both ways, it's delicious. 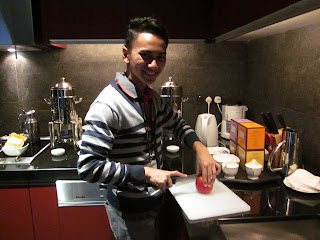 I am the official unofficial photographer of the event. Which means officially, I am appointed as the unofficial photographer. I know right, what a totally laid back job and let all the professionals do the sweaty hard work of asking high profile people to pose for them. If you must know, I will be going around front and back scenes of ScreenSingapore and take as many candid pictures as possible. I have a lot of things in mind but digital camera is pretty much restrictive on its quality.

The highlight of the event for me was the red carpet gala premier where celebrities make their debut appearance at the Vivo City Golden Village. That was one of the most embarrassing moment I had, apart from being so underdressed. I learnt my lesson by getting something proper for the following premiers and yes, look at where the escalator is going - not to the red carpet. 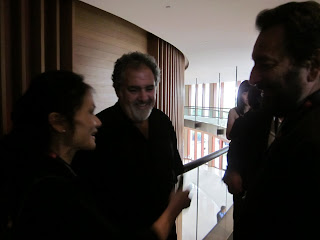 Everyone was in high spirits and I saw familiar people at the gala and opening party. Bobby Tonelli, Nicholas Chee, Frank Cintamani, and even Jeremy (one of the short film directors I knew from my project last year). I didn't talk to all of them because partly I'm nervous. Shh!

It's an honour to meet film producers like Jon Landau who produced the all time high grossing film: Avatar and Titanic. I was head over heels that I was speechless on what to say but to move my fingers to snap their photos.

Okay folks, I will keep in touch with you again should any worthy updates come up. Ta!
Labels: Entertainment Events Exhibition Film Festival ScreenSingapore