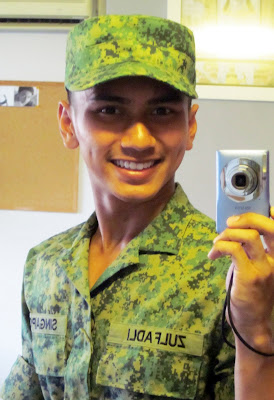 Ever since day one I had my heart set to give my best no matter what happens. Conscription may not have given me the luxury of time and allow me to do things the way I want but it has definitely widen my social circle.

Several weeks ago, we had one of our high key events - field camp. I did not enjoy digging the shell scrape, what's more sleeping in it and got it destroyed by heavy rain the following day - my heart sank just to see my hard work soaked with murky water! Sleeping in tent with someone you just knew about a month ago is something new and having your sleeping hours fragmented followed by sauteing yourself in sweat in the day is not funny at all. If this is a reality show however, it will not be much of a drama.

The people around me - commanders and platoon mates made life easier. At least that was what I thought. We were like the eye of the storm. Field camp was smooth sailing despite the rush and unforgiving weather.

After our route march on the first day, we were really beat and the first thing that you would want to do is to let the shower tap run above your head. Newsflash everyone, we're in the middle of a field. No toilets around. No taps to begin with. So if the jerrycans were to be stolen by while boars, I wish good luck. The weather was despicable. The sun was scorching and everyone was tired. The ground was dry and I spent a lot of time wondering how to fix the tent while we were marching. Seriously, I could have thought of something else but that kept me going. Apparently the soil was not as bad as I thought it would be. Bringing up the tent was as simple as ABC but the alignment was a nightmare. However the IC's for the day did quite an impeccable job in aligning the tents.

We spent much of the days doing movement drills and high kneeling. I was so glad that we were allowed to use knee guards. Not all were allowed since it depends on the company you're in. I wondered how it was like to high kneel without knee guards so I took the chance by taking out my knee guard and kneeled. For less than five seconds I thought my knee was gone. Imagine kneeling on those edgy rocks, it's not fun at all.

The most tiring part during the camp was to dig a shell scrape and that almost snapped my last wire of patience. On that day the weather started to get a little edgy. It was torrid at first. You have no idea how many times I refilled my water bottle while wrestling myself with the hard soil. They said mine was tad too deep and too narrow that only I can fit in. Even I was amused when I looked at it from far. I wondered how my platoon mates are going to sleep or prone in my shell scrape should they have to take over my place?

It rained momentarily while we were digging so somehow that softens the ground and digging can be expedited but by then all I was left to do is to touch up my shell scrape. I should have known and waited for the rain so that I didn't have to put in so much effort to it.

Sleeping in the shell scrape is a particular highlight in the camp. Sleeping in tent is a norm for everyone even for civilians but sleeping in a quarter-grave hole is a whole new level of experience. It rained in the wee hours of that morning and everyone thought it wouldn't be heavy but I have a premonition that says it's going to get bad and it did. I put on my Gortex before everyone else and sat there waiting for further instructions. We had to be evacuated from the area since there was lightning. Imagine this.

I was sweating on that warm night and suddenly I felt very cold due to the early morning dew so my sleep was not comfortable at all. That kept me awake until it rained. My energy level was at the lowest. I felt like being in my sleeping position and continue sleeping despite the rain but the instruction was to get out and double up to the Urban Operations (UO) building. That was the last thing that I wish I didn't have to do. With the heavy rain, muddy ground, and shell scrapes close to each other's, walking down the slope with our full battle order in the dark without slipping and falling into another shell scrape is a skill we acquired on the spot without practice. At that point of time, I really thought it was fun because our camp won't be like any other field camp at night.

At the end of the day, we had to cover up our shell scrapes but we had to clear all the water that was collected that morning before covering them. Otherwise the hole will be covered with mud instead of hard soil. Do your math on how much volume of water we had to clear within a span of several hours. The tougher and dirtier job was to clear the water but the idea of taking out my entrenchment tools from my bag and washing it up after that, I'd rather put my uniform in the washing machine. It has to be washed anyway. Whatever it was, at that point of time, you'll be too tired to think but to follow your heart instead.

How hard things were at that time, it was a memorable field camp that not all company get to experience.
Labels: National Service Personal