2012 With Siti Nurhaliza, Family and Friends

Before I begin, I would like to wish all my friends and relatives a happy new year, 2012! Hopefully this year brings the best time out of your life and may all of you prosper the way you want it to be.

I hope everyone had a blast during the countdown to new year last night because I know I did despite being worn out by my day to day camp activities. Sleep was never enough. So how did I celebrate my countdown you may ask?

Last evening I went over to Amar's and Amir's (Nizam's little twin brother) 5th  birthday bash at Aloha Loyang. I was there with Fiz and I was so glad to finally meet Nizam and Fiz once again after so long! Sadly Amin wasn't there to be with us (especially me because I had to go). I would like to thank Nizam for inviting me over and I really hope you guys understand why I couldn't stay long! Siti Nurhaliza was waiting for me on stage. Heh, joking! I had to quickly change because I'd probably die of heat stroke in red dress shirt. 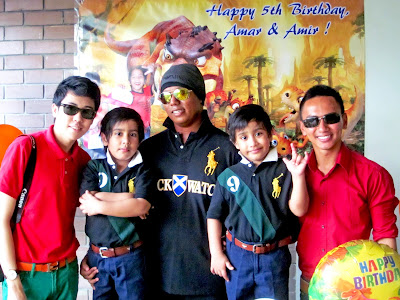 Last night Syaz's family and mine went over to The Float@Marina Bay to attend Celebrate 2012. Since all these while my countdown had been with my friends, I thought it would be great to celebrate this year with our family. This is indeed a good start of the year, and it somehow fulfills one of my new year resolutions - to establish a healthier relationship with my friends and family. Read my WordPress post!

The event kicked off with pre-show (before it went live on television) with performances by celebrities like These Kids Wear Crowns, Sezairi Sazali, Sylvia Ratonel, Sheikh Haikel and of course, top Malaysian singer Siti Nurhaliza. It was pretty happening, most of the songs during the pre-show were upbeat but several few really touched our hearts with slow songs from Sylvia, Sezairi and Siti. It was surprising to hear Siti Nurhaliza sing a Mandarin song that night. Accent and pronunciation aside, I'd say it's a good attempt to woo the country where majority were the Chinese. 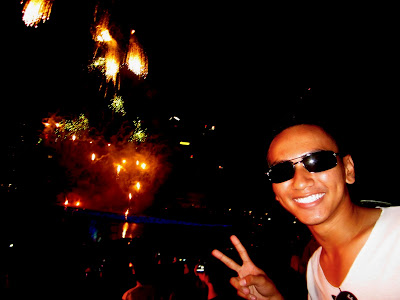 But what really got the crowd hyped up a little bit was when the performers started singing Hollywood song like E.T, Single Ladies and Moves Like Jagger.

The show was very energetic and it got better with host like Gurmit Singh and Michelle Chia. It's as though you can never go sad when Gurmit is on stage. He is just hilarious and crazy, and I mean it in a good way!

Must I say the crowd was boring. Never mind the old people with walking stick - hey, I'm not discriminating but do you really have to stone there when the performer is not your idol? Come on, you're here to party, have a good time and enjoy all the beat but you guys are pretty much dead. Even if it's pre-show, gimme some gusto and zest! Even my mum headbanged better than you guys. You guys are not cool at all, not cool. Whatever was happening at the mosh pit, was mosh sh- - you know what, I shall stop there.

Apart from adoring our favourite personalities on stage, the highlight was definitely the eight minute pyrotechnic display on the bay. It was so beautiful and magnificent. Hands down that was my first time to see fireworks at The Float@Marina Bay. I've never celebrated National Day or other occasion there before so it's thrilling to see fireworks sprucing up the night sky.

And then comes the worse beginning of the year - to be stuck in the car park for about an hour because there were too many cars going out at once. We survived!

I was really beat when I got home. New year celebration did not end just there. It got more exciting. 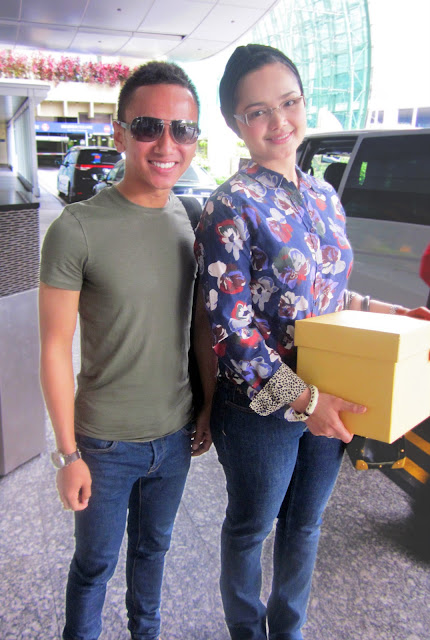 The next morning, Syaz and I woke up early for celebrity hunt. Our prey was Siti Nurhaliza. It was great to see her in person and SitiZoners (it's a noun for her fans) were there to celebrate her birthday in advance. The SitiZoners got to meet her and there the SitiZoners got to enjoy the birthday cake with her! Before she left, I took a farewell picture with her before she departed to the airport.

She is such a sweet doll. I don't know about other Malay celebrities that is as hardworking as her but she really made a great start in her singing career and now, she even got an honorary title on her. Never mind what people said about the way she dress, the way she sings, the way she does things, or even the husband she picks (I don't know why personal life is involved when you're talking about people's career) she's still the Malaysian heartthrob. I can't wait to see her on Bio Channel. Coming soon!

Her latest and first English album All Your Love is awesome!


Okay moving on to a personal note, I would like to thank everyone who made my year 2011 a memorable one! Let's make the world go round and make this year a better one!
Labels: Concert Entertainment Events Personal