A Week in Fine City: Singapore (I)

If 2NE1 and Beyonce did their world tour, I did my island tour. Not that rich to do a world tour on my own. I had my vacation in my homeland and like any other tourists, I am pretty impressed.

A good friend of mine, Dhany from Jakarta, Indonesia came a week ago so I got to kill two birds in one stone. I won't write much but I will highlight to you some points and maybe tips for you to take note if it's gonna help. This post goes to you tourists and of course, my fellow Singaporeans. The world is just too big to venture for a one week vacation. 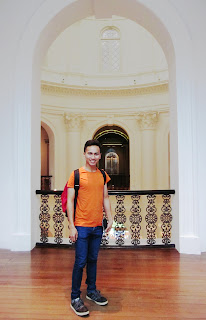 National Museum of Singapore
Let's start of with the basic. The first place we went when my friend arrived, we went to the National Museum and here's why it should be the first activity on your itinerary. While most would have gone to the mall upon arrival, I think it is important to expose yourself to the Singapore culture and history for better understanding. Then you won't have much of a cultural shock. Its entry is cheap yet rich in culture, history and information that even I, as a Singaporean didn't know. Then you'll understand why the Singaporean Chinese, Malays and Indians are just different from their native counterparts. So if you're heading to Singapore, I recommend you to visit the Singapore Living Galleries and Singapore History Gallery before going anywhere else. It's gonna be a plus point for you if you're going to head to places like Chinatown, Little India, or Kampong Glam. Then on you'll be able to see how much these places have changed and progess.

I've never been so interested in history until I went there. Hands down, I did not fare so well for my Histroy exam when I was in secondary school. A subject which I avoid doing totally.

Tip: Visit the Singapore Living Galleries and Singapore History Gallery. You might want to spend more time there with the complimentary multi-lingual audio guide.

Malay Heritage Centre
My family, Dhany and I went for breakfast at Kampong Glam for there's an array of traditional Malay dishes, followed by a tour at the Malay Heritage Centre. That place was lovely sight with well manicured shrubs, clean, simple and decent facade. Although Singapore is just a red dot on the world map, the Malay culture here is influenced a lot by the countries she is surrounded by. I must say it has a lot of information on the modern landscape of Singapore's Malay society but it lack on how the Malays were during the colonial times. They should have displayed more permanent exhibits like the metamorphosis of the Malay scripts which begins from Sanskrit and now, Roman alphabets, and how the majority of the Malays in this archipelago has evolved from being animists, adherents of Hinduism then Islam through trade. 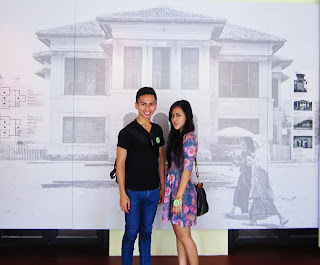 I happen to read a lot on Malay history because it is more complex than I thought, which is why I thought it lack a lot of things. And for its complexity, this is one of the reason why I avoid answering questions on Malay society and its religious belief. Not that I can answer all but not many would be able to comprehend its intricacy. After all, that place is called Malay Heritage Centre for a reason so it would have been better if they cover on what happened in the Malay Archipelago as well.

The Malay Heritage Centre just reopened in September 2012 after going through one and a half year of renovation works. The painting is still fresh!

Tip: Wear a simple footwear if you mind taking time taking them out. No footwear is allowed in the Malay Heritage Centre permanent exhibition.

Shopping at Bugis Street
Dhany and I also went to Bugis Street so that she can enjoy the best retail deal in Singapore and she was amazed by the name of it. She was saying that back in Indonesia there is an ethnic group named Bugis. She's not wrong at all. Bugis Street was indeed occupied by the people of Bugis then. Amazing what Sir Stamford Raffles did to Singapore then. In a way it makes Singapore histroy easier to understand because it has been so called organized by area.

At Bugis Street, don't just be prepared to shop till you drop, but be prepared for the crowd and potential pickpockets. Although Singapore's crime rate is one of the lowest in the world, it's safer if you remain vigilant. No, you don't have to padlock your bag!

Tip: Cash is the most acceptable mode of payment, credit cards are acceptable too. There's money changer there as well should you are short of cash.

There they have a lot of apparels and accessories for sale. Mostly for teenagers while the older ones can cross over and head to Bugis Junction where there's a relatil mall there. You can get local souvenirs at Bugis Street too. In my point of view, Bugis is one of the best places to shop because the things sold are trendy, affordable and you have a choice to let your teenage kids shop at Bugis Street while you parents shop at Bugis Junction or Bugis+ mall.

It's not much of a cheating technique, just that it's a weird policy I don't wish to abide and avoid as a consumer.

Tip: Wear something light because it can be very stuffy at certain parts of Bugis Street and who knows, you can try some outfit by wearing them over? 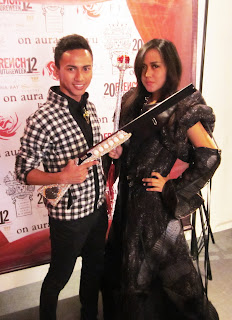 On Aura Tout Vu Fashion Show and Closing Party
Before Dhany came, I messaged her to bring something nice for her to dress up as she'll be treated to a surprise.

Little did she know that she will be attending a fashion show. So when we reached Marina Bay Sands, she was surprised by the unexpected event. She thought I was going to bring her out to some fancy restaurant! Well, Dhany, I really hope you really enjoyed the haute couture fashion show and the closing party. Definitely a crazy night for us!

The closing party was bizzare!


Jurong Bird Park
It is shameful that as a Singaporean, we don't see what our country has got to offer. Jurong Bird Park is Asia's largest bird park and I had no idea until I visited their website. The last time I went to Jurong Bird Park was when I was what, fifteen? Proud to say that for a long time I've not been there, I remember that place quite well. Large probably doesn't seem so large to me anymore I suppose? Only kidding! My legs were wobbling by the end of the walkthrough. Shagged! I wonder how Dhany survived in heels. As she puts it, suffer for fashion! 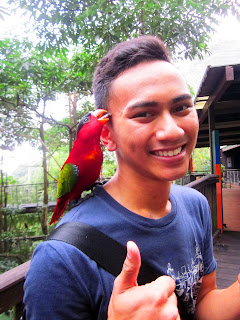 Feeding the lory was the highlight and I really, really recommend you park goers to go there. For just SGD$3, you can get close to the lories, feel them in your hands and hear these cute creatures chirp and get comfortable with you. It felt so ticklish when one of them perched on my shoulder and started licking around my neck and ears. Very playful little birds.

One even stood on Dhany's head! Glad that that did not freak her out.

We were supposed to go to Singapore Zoo and Night Safari but the weather is just not on our side on the two days we planned. I guess Jia Jia and Kai Kai don't want to see us. Or is God telling us to wait till the River Safari's construction is complete and open to public? I love animals (except for some) so going to these places is kinda huge for me.

Tip: Check the weather forecast before going to the above mentioned places as these places adopts open concept exhibit.

It is small as compared to the ones in other contries but that does not mean you can't have the same adrenaline rush and fun here. Besides, it's Dhany's first visit and it is an adrenaline junkie's dream to try out the rides at Universal Studios.

There are several preparation that needs to be done before going. I kinda forgot what  should we prepare for before going so I had to refer back to my 15 tips entry (click here) before going to USS. Should you want to come to Singapore and have a blast at USS, avoid the monsoon period. It is not worth it if it rains. It will only dampen your spirit and probably your wallet too because tickets are charged peak period. Nonetheless, I am very grateful that it did not rain that day but it started to drizzle when it was about to close.

The new ride, Transformers was so amazing we took them thrice. Very thrilling without giving you a heart attack like the Battlestar. Didn't had the time to go for the Mummy again though. If you plan to go there again, you might want to wait for Sesame Street to open!

That day at Sentosa, I have never felt so lucky and I have no other to thank but the Almighty. 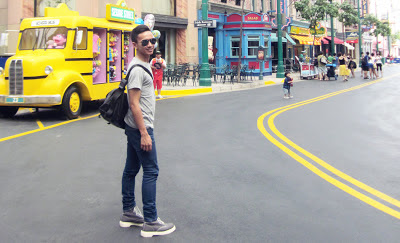