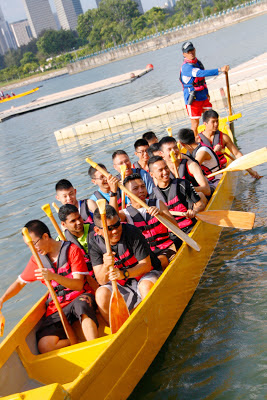 A few days ago I teased one of my friends, K, who signed out an e-mail with a tagline, "Looking forward to a rowing good time!"

Today, it materialized and I congratulated him for pulling off such a rowing good event.

This morning was work. No, not in the office but on the sea. I had to wake up early in the morning to drive over to the Singapore Dragonboat Association. Thanks for the absence of the event signs. Up till now, I wonder where the hell were they? Nevertheless, I managed to find my way! Not that hard after all.

We were briefed on the pedaling techniques and such, and then we were ready to go! I was quite excited honestly, because I do enjoy this kind of water sports and I've not been pedaling water for a long time. It's pretty thrilling for me definitely. 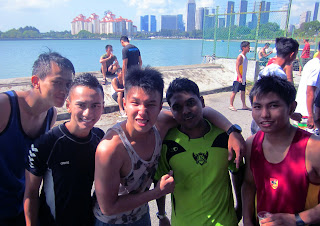 In it there's a game where we had to do our best to splash our opponents with water, and see which boat will be the wettest. There were eight boats and we were segregated into our different companies so naturally, we were shorthanded because my company has the least number of people. We did not win the 250m race (neither were we the last!), and we were definitely not the driest.

The event wrapped up with promotion of deserving platoon commanders and my company had a feast at Swensen's after that. We will probably appear in the Rich Kids of Instagram for having too much to eat. Hang on, but there are some old men in the picture too. Only kidding!

To the three of my colleagues, I must say I will miss you guys. I am just speechless about how fast time passes by. When I return, the place I call my second home (for a really good reason) will be very, very different. Certainly gonna feel a little bit empty without you guys.

And by now I guess the entire island had known that I will be attached out momentarily. It's an opportunity that I did not have to ask for. I've been doing what I did for a little too long that I thought it is time to experience something new. It's a pretty much once in a lifetime thing to do. In a way, I get the best of both worlds. One can only ask, get and do that much. 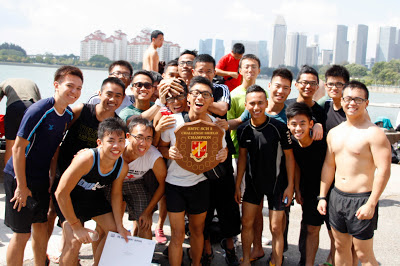 You only live once. Live it!
Labels: Personal Sports