Hello everyone, it has been a tough month at work this month because there were a lot of things going on and I hadn't had the time to sit and check my friends out or even have a proper dinner with my family. But all that ended last week when my little babies got their new posting and I am off duty from babysitting and back in my office.

So where was I?

The PES C Recruits
As most of you would have known, throughout my National Service, I hadn't had a full taste of recruits and their silly antics basically because I work in the office. I count myself lucky, and I am grateful for that but towards the end of my National Service, I kinda want to experience how is it like to, you know, babysit a bunch of recruits who were just like me about more than a year ago. And part of the reason was because there were times when people come to me to rebut a debate about work and say "What do you know? You are not from coy line." And many other reasons that I'd love to believe and secretly hoping it's true.

Then there I was, for three weeks being in charge of a batch of recruits whom I by one look, can pretty much tell the ones who like to smoke out of things and the ones with genuine problems. It was fulfilling because when you see an improvement in them, it feels like you are part of the change. Three weeks can make me proud (I'm easily pleased). 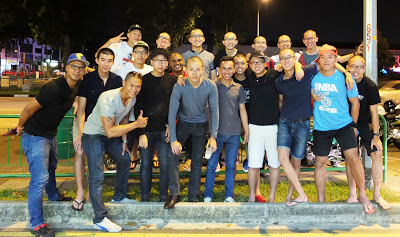 I am glad that my platoon invited me for supper, since there was no time for chit-chat during working hours, so I took that opportunity to know my recruits.

Now that I am back in the office to reign, there must be so much work to catch up on because I for one have an inkling the office is a sinking ship without me. Sorry for being narcissistic but I cannot be wrong. Just think of the e-mails!

Party with Civilians
Here's a funny story. After a movie screening event my colleagues and I planned to meet later that night to hangout and celebrate with the ORD personnels. I was really beat that afternoon because I was still with my recruits as they had live firing which ended very late and the nature of work is that we are the last to sleep and always the first to wake up.

So I said, sure I will join them that night. Once I got home and settled, I set my alarm to wake up about 8pm but I think I didn't hear the alarm, and my mum entered at about 9pm plus to wake me up and told me there's food on the table. I was damn late! I wasn't on time but I wasn't the last either.

Never mind I was late. I was queuing to get drinks and the two unexpected person I saw was first, a colleague who is probably never in the office. Second, a recruit of mine. Better yet, from my own platoon. How can I not be shocked to death? Only kidding!

Cycling with Workmates
This week is sabbatical for me to recuperate, to get rid of my breakout as much as possible and just rest my mind for a while and be mentally prepared to be back in my office. Oh, and get rid of my sunburn, thanks to Mr. K.Y. for organizing cycling activity at such cancerous part of the day. 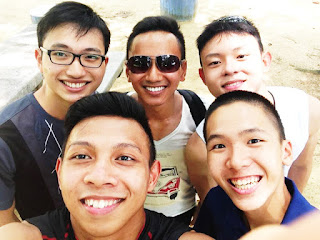 Nevertheless, it was fun and if I hadn't come on that day, I wouldn't know if I can cycle hands free! That's right people, I can finally cycle hands free after so many years of trying! You have no idea how overwhelmed with excitement I was to be able to hands off the handle while cycling.

But do you know how I see this activity as? A welcome back party for me. How narcissistic. Only kidding!

A Week Break
My break this week was well spent albeit I did not have the time to plan them because work was tight before that. It was very short, so I can't meet everyone and everyone is at work! I was window shopping alone at ION Orchard on Tuesday and I was not hoping to bump into anyone I know because I looked very unkempt. 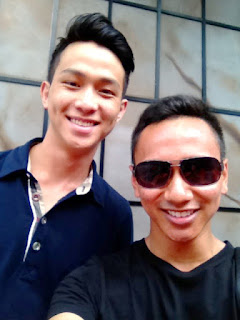 I was not in the usual outfit I'd wear to shop but fate has it that I bump into my office colleague: J. Choong. Of all people! By the way, congratulations on your, you know. Not gonna break the news in case you haven't!

The day after, we had lunch together and spent the entire afternoon doing our work at Starbucks at Rochester.

H. Armand was true to his word, it's a fancy and conducive place for study and work.

On Tuesday evening my family and I visited my uncle at the hospital. Let's pray that everything goes well and there's hope for recovery. Later that evening, I had a walk with S. Senin at the park and we did some catching up. We have not met since Bangkok!

I am going to spend the remaining days of my break reading and archive the ton of photos which has yet to be uploaded. Have a great weekend!
Labels: National Service Personal