Hello everyone! I just came back from Genting Highlands recently with my colleagues and my skin was parched dry. It's time to slap on some of aloe very gel on them. 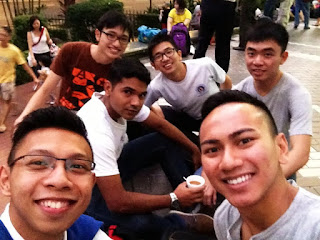 Being in on Genting Highlands reminds me of my childhood days. If I remember correctly, the last time I was there was about nine years ago? Somehow, I have a photographic memory of that place and it reminds me of the good old times I had when I was young - how some things never change. How I wish that photographic memory can be used for my future examinations. It can do me good!
I went there with my colleague so I can imagine the entire office is as good as closed for the two days, because I don't think a lot of things can be done without us honestly. The itinerary was very simple since it was a very short trip. 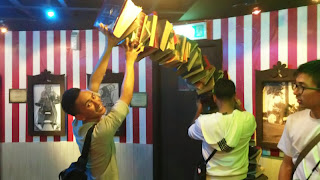 A lot of things went into my mind before the trip and the one major question that played in my mind like an unstoppable tape recorder was "Will there be WiFi?"

Come on, we are living in 2013 where everything has to have internet access. All of us at one point has to use WhatsApp, Twitter, Facebook, Tumblr, or even Google should you need to research anything last minute about Genting. Internet connection today is as good as basic necessity when traveling. Even budget hotels in Malacca - which I've been to, has a strong and accesable WiFi connection. First World Hotel? Don't even think about it! Here's the funny thing, I asked if they have a WiFi connection and the guy told me that there's no WiFi but you can get it at Starbucks right outside. In my mind I was like, are you kidding me? First World Hotel is the fourth largest hotel in the world and you expect all of us to get a byte of internet at this small franchise of Starbucks? I was like okay, sure, better something than nothing right? When I got there, I wish I wasn't given hope at all. The connection is as slow as...

It is indeed called the First World Hotel, not First Class Hotel.

On the first night, some of us went to Modesto, probably the only night club there just to see how's the clubbing up in Genting is like. Initially we wanted to go down to Kuala Lumpur (KL) to go to Zouk but why trouble ourselves just to see how the scene is like? And here's the ironic thing about the WiFi connection at Modesto. Not many goes to night club for the obvious reason. Casino is the main attraction. So happen one of us tried to check if there's WiFi connection. The disaster has got nothing to do with the connection strength at all. All it takes is just one person to say that the connection is fast to have the entire table to take out their phone and start updating their Instagram and check out their WhatsApp messages. So much for having a social night at a night club! That however, didn't last long because that distraction went off when the music starts to get better. I appreciate that my room has got a great view (as you can see above) and it's really amazing because you can get natural light in the room. Unfortunately we were not able to get the same view for all rooms and worse, some of the rooms are facing another room - which is so appropriate for perverts! Hah! The room has got basic amenities like fridge, television, lights and all. Excluding all the overpriced snacks they have in the fridge. I've got to say, they need to upgrade their 80's television. Are we still watching that small 12" boxy set? Thank God for the wonderful view though. It compensates the absence of nice television by a lot.
Sure, most people came here to gamble but I'd appreciate some good quality images and sound to fill in the silence for non-gamblers when they're alone in the room. It makes it more comfortable for those who lost their bets. But with small television, we can be sure Samara Morgan will not come out from that tube to rob your life away!

What I like most about Genting is the cold weather. It's cold at night, you don't need air-conditioner to cool the room when you can just open the window. It's a good cost cutting measure if their casino were to run out of money. We also don't have to be afraid of dengue or anything because we're located on a high floor. By the time the mosquito would be too exhausted to fly up and eventually die. But just be careful! 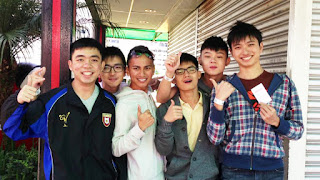 There are two things I hate about the weather in Genting. It's so dry that my skin feels tight. And it can be so dry and cold you don't know you're having sun burn until you see your skin turn red. So my advice to all of you who're going to Genting anytime soon, slap on some SPF and have a tube of aloe vera gel, just in case. It's more comfortable to put on SPF there than back home because here you'll feel uncomfortable when your sweat mixes with the sunblock. Feel no guilt slapping too much lotion there!

The following day we had breakfast at the First World Cafe. It was crazy. They claim it to be popular (see their official website, I had a good laugh), I claim it be disaster. First, we had to queue, it's like we're living in Africa waiting for food ration. It was a long queue, thank God it's moving at least. Never mind the long queue, to enter the mess - there was even one staff with a walkie saying things like "Come on, move fast." and such.

We finally managed to enter the restaurant. The worst part of all, plates are hard to find because it's like a bloody Black Friday scene! People chasing for plates, and then cups, and then food, and some food you had to queue at the station for so long I think by the time I got my food, I'd have finished up a cup noodle at the comfort of my hotel room. That place has got to go!

The theme park was great but they could use some serious maintenance and their staff could use some morale boost. They look so bored that some of them can put themselves on the roller coaster track. Only kidding! But they do need to look happier, otherwise the crowd would be as dull as you - which really happened at the pirate ship. All of them were so quiet! The service at Berjaya Times Square indoor theme park is definitely better. 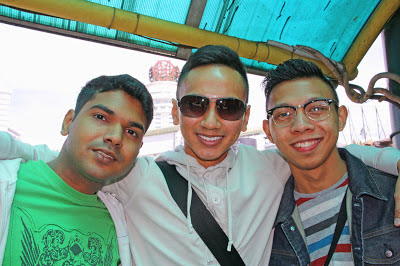 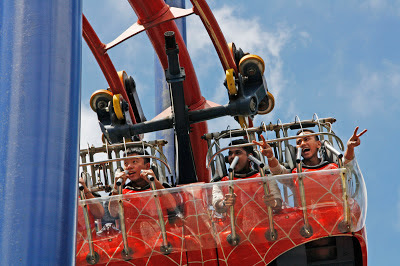 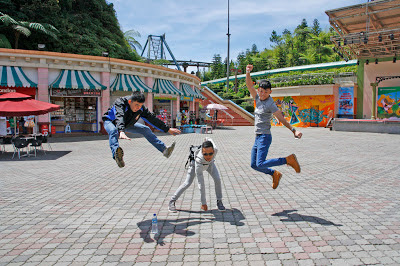 Ain't feeling the energy at the theme park. I almost packed and go home but I got distracted.
You know how most people who go for holiday would dress as everyone around there? Just jeans and tee - which is the norm at theme parks. Or maybe shorts for hot places. Apparently I saw this Korean lady who was posing on a display car for a photo taken by her friend. She wore this white dress, and Swarovski studded sneakers. I was like "What on earth is this thing doing? I'm about to pack!"

I was walking quite ahead of the group and one of them just told me that it was a member of Sistar (that Korean pop group) was there. I was like, oh that lady in white? He was like, yes, that's Hyolin (or something)! I had no idea they were having concert. Genting will probably have another landslide for having tonnes of Korean fans patronizing the Arena of Stars.

Anyway, here's a video of the Space Shot ride we took at the theme park. Have a good laugh hor.
Shopping was amazing, ironically. I told my mum that I won't be shopping at Genting but apparently one of the retail was having 50% off, and I just can't resist it. So I bought myself a new iPad cover, and some eyewear. Hate the clothes cutting though, doesn't fit me. Sucks when you can afford but you can't fit. First. World. Problem.

Despite all the complains, I think there are some good stuffs to see there. You should top up some money for breakfast at the Coffee Terrace - the one at First World Cafe is total chaos. Coffee Terrace was amazing. Better environment and definitely better food. It is the definition of proper hotel breakfast. Quite a walk from First World Hotel, but worth it!

And if you have the time, you might want to watch FREEZE, their new resident show. How I wish one day I'd have my own resident show at The Palazzo, Las Vegas or the very least, Marina Bay Sands, Singapore. Apparently two of my new friends who went there said it was good. I shall take their word for it. Anyway, nice meeting you guys!


Updated as at 5th June 2013:Here's an overview video of our trip which was done by one of my good friends, Andika Fiqri. Enjoy the video!