Hello everyone! They say, 'Big success takes big energy. Come on, say it with me!' every single morning and it became a mantra for the three days at National Achievers Congress
2013 held at the Singapore Expo.

How did it all started?

What did I learn at this event?

This event that was organized by Success Resources has an array of great speakers. From the west like Sir Richard Branson and Les Brown, to the Far East with people like Zhang Zuolei and Takafumi Horie.

All of the speakers who spoke has a different walk of life but what's the same - which I can be sure of, all of them knew they have something to share and that they have the potential and are able maximize their abilities.

It's a three day event and to share with you every single thing that were taught will take ages and to make you understand the things that were learnt on those days, there are some quotes I'd love to share which I hope will enlighten you today.

'My learning is my responsibility.'

'As long as you live, you're here to give a gift.'

'You do not need an MBA to get an MBA - Massive Bank Account.'

'The trend is your friend!'

'Lack of confidence, tight budget and lack of spirituality, these are symptoms, not problems. If you describe a symptom, you will not be able to create a machine to solve your problem.'

'You can have what you want, but you can't have everything that you want.'

'You don't need money, you need a strategy!'

There were so many things learnt and I'd like to thank my parents for the support and everyone who agreed to the change of my schedule to make way for the three day event.

What I enjoyed about this congress?

Who cares about Sir Richard Branson if I'm given the chance to run towards the stage and dance on it with everyone else? Only kidding! Rob Riquel was right, we shouldn't take life to seriously. I like the fact that the congress was pretty much informal. There was this one time after break, we got to dance on stage to Let's Get It Started by Black Eye Peas and it was sheer dumb luck I won a lucky draw. Couldn't be any more grateful. We're Asians, don't we love anything free? So here's something I'd like to share with you guys. 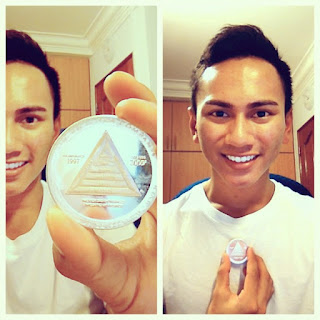 What I got here is a pure silver coin (I never thought I'd need a silver cloth) from Robert Kiyosaki. They said it was a limited edition and all. I refused to believe it because I was about to make some calls to get a copy of that coin until I got one and did my own research. So here's what I found: It's pure silver and has a mintage of eight thousand pieces only. I had no idea!

But that's not important. The significance of the coin is this. It's not only a precious collection from attending the congress for the first time, but it contains a valuable lesson that I treasure more than the coin: B-I Triangle, a Robert Kiyosaki's trademark lesson on building business.

Other than that, I love the event because I get to wear what I want to wear. I'd expect people in one dress code but no. Some people come in shorts but they don't last. It was so cold in there!

Who do I know that I saw?

Although I'm not a fan of soccer, I'm well aware of Liverpool's motto - you'll never walk alone. I know I'd be going alone, I just don't know who I'd saw.

I appreciate making new friends although we were kinda force fed to new friends by being made to sing along like some mass and give high fives to strangers beside you and do things like 'Come turn to the person beside this and say so and so..' I be like, what?

It was a great surprise to see two of my friends who were there! One of them is my ex-schoolmate, and the other one was my ex-training buddy. It's so good to see them. At least I don't feel so out of place. I am only human who feels more comfortable seeing familiar faces!

I'd expect to see more people next year because one, most of you would have known by now the valuable things that you'll learn and two, once you've read this, you'd be more than ever curious to see what it's all about. For those shopaholics, it's like Black Friday! People queue to enter, people chase for free stuffs, discounts and what not. It's cray!

Okay folks, I'll write again soon. Hopefully this is insightful for all of you!