Recently I went to STOMP - dance, music and theatrical performance that uses everyday materials like shopping cart, matches, cans, bins and such into wonderful noise. Noise with tempo, beat and rhythm is definitely music to my ears.

STOMP started early in there 90's and if you're born in Generation Y should know what STOMP is. If you don't, I daresay you're very, very outdated at that time. Only kidding! I started to know STOMP when I was in primary school, when my music teacher showed us one of the videos during music lesson. Apparently our music lesson was not about reading musical notes, but assimilating ourselves with the pop culture - which I really appreciate very much. Otherwise, I wouldn't know who's 'N Sync or Westlife for that matter.

It was really extraordinary how simple things like plastic bags or brooms can be made into a musical instrument. Something that seems cheap, useless and probably trashy was turned into something melodious. This only shows how one can turn their life over with what they have - not what they don't. Espeically when you're not on your own where you can make louder and better music - just like what STOMP does.

What I really like about it was not only the music which can be downloaded, or viewed on YourTube. It's the synchronization of their acts like passing cans without losing a tempo that makes their hard work paid off. STOMP is on its 11th year in London's West End and its 20th year on Broadway. It does say something about it's awesomeness. 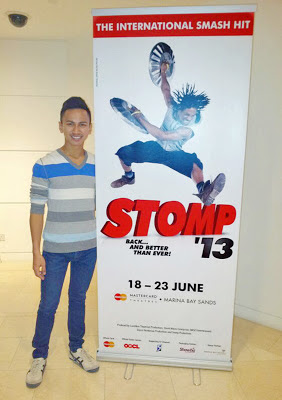 So if you happen to miss it in Singapore because it's already over, feel free to fly for their show on Broadway, or even their world tour. For STOMP, it's worth paying a little bit more.

Funny thing, the purpose for some of us to be there was to feel the venue and I was told that Esplanade is better off than MasterCard Theaters. Which is kinda true. The acoustic and the lush feel is just not there. Oh well, I'm not a sound expert (although I studied a little bit) but you can feel it. But I've got to say, I love the simplicity of the front of house. All white and glass, it felt like I was at The Guggenheim in New York.
Enjoy your week ahead!