Hello everyone! I hope most of my schoolmates are having a blast over the holidays. There are several hiccups in my schedule this week and now I am almost mentally dead arranging my own schedule but no matter I am doing as much as possible to keep myself optimistic. Funny thing, organizing your weekly schedule can take almost half a day. No kidding.


Although some things may not go as planned, I am grateful that I am able to wake up today and drag my feet to the Islamic Finance Service Conference (IFSC) 2013. This event is held to discuss on the niche market in the banking and finance sector; Islamic banking. Its aim is to build a community of top service providers especially among companies and entrepreneurs in Malaysia and Singapore who are constantly seeking new ideas and providing solutions and services in the Islamic Financial sector, to create value for their customers, stakeholders and the industry.

I am so grateful to have been invited to this encouraging event. There's a lot that we don't know that I've learnt and whatever that I've learnt, I'll always feel obligated to share. Be it haunte couture, sports, study tips and everything else.

Before that, let's talk about the event. I mean, this is my first time attending a conference as a delegate. Back when I was in school, I was just a paid volunteer collecting pay check about a month after any event that I worked for. Now that I am on the seat as an audience, it allows me to pay more attention on what was being taught.

Oddly, I did not think through of my outfit. I was this close to wearing just tee and jeans. Luckily I checked out their website and happen to see some of their past pictures. Only then I was aware that I had to pick something presentable. Next time, it would be nice if they can put it in black and white on the dress code. Even the makciks there were well dressed in fancy turbans.

The event definitely attracted more Muslims naturally because they feel obligated to find out what's in there for them (we'll dive in later) and there are a significant number of non-Muslim attendees who are industry players. It was really good to see the former Member of Parliament, Dr Ahmad M Magad, and former Senior Minister of State, Mr Zainul Abidin Rasheed.

So briefly, what topics were covered in the event? It's an eight hour event, you should attend next years. 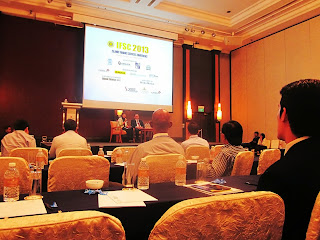 In the early part of the event, they mentioned about the Islamic finance ecosystem, the technology, guidelines set by each country's authority and the different views of Singapore and Malaysia towards Islamic finance. The jist of the talk was that in Malaysia, industry players see Malaysia's plan as wanting to be the Islamic financial hub of the world. This can be clearly seen in the robust effort that they had put in since the late 90's with the start of Tabung Haji (Haj funds), takaful and so on. Singapore on the other hand, sees Islamic finance as a subset. Which means to say, Singapore aims to be a financial hub, with Islamic finance in it as a niche market. Hence if you are aware, Monetary Authority of Singapore (MAS) has implemented some framework to assist the transactions in Islamic finance. What the speaker (honestly, I don't remember names, apologies much, but be honored I remember what you said) was saying was that the Middle East (where majority of the Islamic funds are) wants to see a collaboration between Malaysia and Singapore, working together for a better system because Singapore has the technology and Malaysia has deep knowledge in Islamic finance. So by synergizing these two together, it will produce a better ecosystem in Islamic finance. One of the challenges that they are facing now is the demand because in this region there's a pool of talent in banking and finance sector as well as Islamic finance. However, there's a lack of transaction in this market segment. Here's why -

To put it in simple terms we have a dual financial system namely the conventional system - our mainstream system where you earn interest, and the Islamic system - which is believed by Muslims as the halal (permissible) way of banking. However, apart from shariah (Islamic law), the system depends on the sub laws by scholars (fatwas) too. It is unsurprising to see a dual financial system where they have purely conventional banking, and either shariah embedded banking products or shariah compliant Islamic banking product. These two are just different. How so? Shariah embedded are usually products approved by the scholars, has so called the Islamic spirit in it, where as compliant are created by bankers but complying shariah. It's a little bit confusing but it's just like the difference between 'No pork, no lard' and certified halal food. So one of the reasons why the transaction volume is low is partly because consumers are confused and inconfident of the system. Or rather, illiterate about the system. However, we are just talking about Islamic banking in Southeast-Asia (SEA) as a whole because, while two-third of the Islamic assets are in the Middle East, two-third of the Muslim population are here in SEA.

Whether the financial product is shariah embedded or compliant, both are still acceptable from the shariah's point of view. But take note, 'no pork, no lard' still does not constitute as certified halal, buyers discretion advised! Another challenge faced in this region is that we want to close the gap between shariah knowledge, and financial knowledge. There are many scholars out there who are graduates, who are well versed in shariah. However, it is also imperative for them to have the financial knowledge of conventional banking. This way the industry can leverage on human capital of the shariah scholars.

While Islamic finance is still new and being explored, it is also important to know the type of financial instruments that Islamic finance uses because there are certain criteria that determines whether that financial product is Islamically permissible or in other words, halal. For example, in the issue of sukuk (Islamic equivalent to bonds a little bit like a zero coupon bond. According to Investopedia, the issuer of a sukuk sells an investor group the certificate, who then rents it back to the issuer for a predetermined rental fee. The issuer also makes a contractual promise to buy back the bonds at a future date at par value. In Islamic finance there are few requisites that an instrument or investment has to meet. So that you can digest easier, here are the main points, less elaboration.
The next question comes, are non-Muslims allowed to participate in Islamic finance?

I think it is like the food analogy again. If it's not against their moral principle, a non-Muslim is still able to eat at halal restaurants, don't they? Unless stated by their own religion that they are not supposed to get involved in any of religious trade or customs. Islamic banking here provides an ethical space for those who wants to comply to the above elements stated. Hence the term, Islamic. It becomes a little bit like an adjective to show a characteristic of a banking system.

One of the non-Muslim participants asked the panel. What is the significance of the Islamic finance in Singapore? And why can't Malaysia, who are have more and better Islamic banking products bring it in to Singapore?  It was responded by also a non-Muslim (moderated by a Muslim) and the response to the first question went like this. The MAS recognize the existence of Islamic finance, which is hard to ignore because of its robust growth albeit being still a small segment. The growth of Islamic finance in fact is way robust than traditional finance. However, not much publicity was given because this must not be seen as a favor to a particular religious group because what was provided are frameworks. Whatever that MAS does bound to have media fanfare and if these news were to be widely spread,  it will send a wrong signal to the majority who are non-Muslims - who still has concerns and reservations towards Islamic finance. It was also added that if the Islamic financial market is beginning to fade, their jobs would cease to exist!

The reason to the second question was that to bring in these products we need the capital and technology and should there be no demand - especially from the Muslim population in Singapore, then it would be a waste of resources. Hence, it is not as simple as it seems.

Honestly it was great that this kind of initiatives were taken to shed more light onto these vague issues. Afterall, religion is a form of guidance and innovations (bid'ah) have to be made to cater to modernization. That's all I have to share with you beautiful readers. I hope with this all of you learnt something new and valuable. See you again!
Labels: Conference Culture Events Finance IFSC Islamic Finance Services Conference