Hey everyone! How's it going? It has been a while since I updated this space and I am delighted that you guys are checking this space out - keep it up! It only means you guys cared about me, and I do to you too.

It's December and the holiday season is here. All I see in the social media are travel photos, food and everything leisure, and I will not be spared from this too! I do tell myself to study everyday because this is what I really like to do for the time being.

Juggling is not an easy feat. I feel like a circus clown being trained to juggle a lot of things but I am not unlimited to constraints. So support from all of you guys is all I need really. I am only human, and to face a hurdle only natural!

Anyway, ain't got time to dwell on that because here's something interesting that happened this month; ScreenSingapore 2013.

ScreenSingapore 2013 is Asia's freshest big screen event where film glamor meets cinematic greatness.  ScreenSingapore attracts some of the biggest stars and latest productions, and is supported by some of the most credible and respected names in the business.  From the premieres to the market floor to the conference rooms, expect nothing but the best.

I am grateful to be invited to one of the latest Asian movie premiere - Firestorm because one of Asia's hearthrob Andy Lau was there to grace the red carpet. Here's someone rollin' and no on hatin'!

Here's a synopsis of Firestorm -

A crew of seasoned criminals led by the notorious Cho Nam (Hu Jun), armed with high-powered weapons, pulls off another smooth and violent armored car heist in broad daylight in a crowded street. Whoever tries to get in their way, they will show no mercy. This puts the police force to shame and humiliation.

A hardboiled senior police inspector Lui Ming Chit (Andy Lau), hot on the trails of Nam and his tight crew, determines to put an end to this madness that causes the lives of innocent people. But he soon comes face with the cruel reality that the usual police tactics are too futile to send these armed thieves behind bars.

Extreme crime requires extreme justice, even if it means crossing his moral line. To Sing Pong (Gordon Lam), an ex-con desperate to leave his criminal past behind, volunteers to be Lui’s informant in exchange for a fresh start with his girlfriend Yin Bing (Yao Chen). But little does he know what hellish situation he is getting himself into.

While Nam is putting together his next big score, the two colliding forces from both sides of the law, each at the top of their games, will soon face their archenemies. As Lui’s hunt heats up, their ultimate confrontation is about to take place on the streets.

As the storm passes through and the dust settles, whoever survives can hardly cope with its horrifying aftermath.

He's not as tall as I thought he would be. One of my friend told me that and I did not believe her at first but now I see some hope for vertically challenged people like me. I think I still have a chance to model for print advertisement!

So there is still hope!

The following premiere was The Nightingale, a Chinese film directed by French director Philippe Muyl. While the first film entertained me, the latter moved me. Here's a brief -

Zhigen, an old Chinese farmer, has lived alone in Beijing for over 20 years after moving to the city to allow his son Chongyi to attend university. He decides to make the long journey from Beijing to Yangshuo to honour the promise he made to his wife to bring back the bird that has been his only companion in the city. 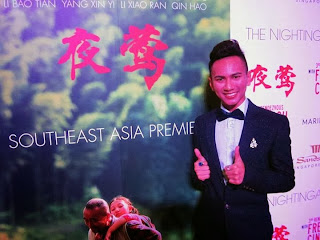 His daughter-in-law Qianing, a beautiful rich career woman, asks him to take along his granddaughter Renxing, an only child brought up in the lap of luxury. While grandfather and granddaughter set out on their journey – one travelling back in time, the other discovering her roots – Chongyi and Qianing, ponder the meaning of the life they have led in the sole pursuit of success and money.

My deep affection for movies remains etched in my heart I guess. When I was young, I am really attached to the television watching P. Ramlee movies and going through tertiary education, I was exposed a lot to short and independent films, and today, I can't miss the first day of a movie!

This sums up my early-December. The second half will be up soon in a bit hopefully. I would like to wish all of you out there a good break! I myself will be taking one because I will come back and ready for my finals. Happy weekend!
Labels: Art Asia Culture Entertainment Events Film Festival Parties ScreenSingapore