We meet again! Previously we saw the old Dubai and after many days dwelling in old town; we needed to go somewhere richer - Downtown Dubai! Downtown Dubai is where all the major landmarks are - tallest building in the world; Burj Khalifa, one of the largest malls in the world, Dubai Mall and the world's largest choreographed water fountain - The Dubai Fountain. This three is enough to set Dubai as the city of superlatives.

In the old part of Dubai where Deira is, you do not see much of these. Mostly were low lying buildings since it's located close to the busiest DXB airport. Here in Downtown Dubai is where you can flash all you have got in your wallet and still feel like just a drop in the ocean. It's no wonder Dubai is labeled as the Vegas of the Middle East. Less the gambling, double the splendour.

Burj Khalifa
Burj Khalifa is major! I can never get enough of the view of this skyscraper! I had my eyes on this man-made marvel ever since touched down and I was totally insatiable looking at this epic building. Known as Burj Dubai before it's inauguration, this building was renamed in honour of the President of United Arab Emirates: Sheikh Khalifa bin Zayed Al Nahyan.

It faced a crazy episode of changes prior to its opening back in 2010 because news had it that all signage on the Dubai Metro, opened just months before, also had to be changed due to the renaming because it is said that Abu Dhabi the constituent capital of UAE, gave Dubai a bailout during the financial crisis. 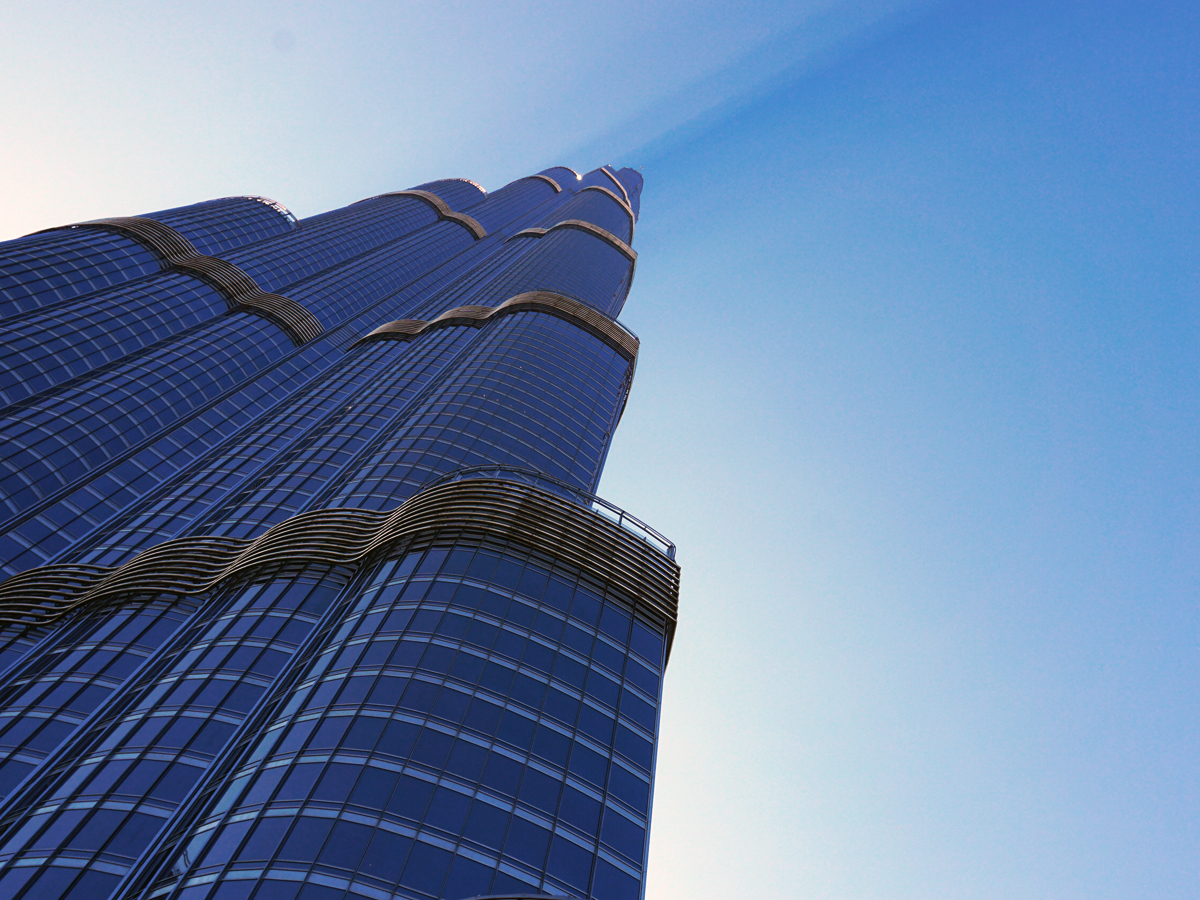 Skin deep, the tallest building in the world does not only hold the title of being the tallest building in the world. In fact, it holds several other record titles like the world record for highest night club, and inevitably the world's highest new year firework display.  Everything is so huge I lost my sense of scale for a while. Burj Khalifa is so gargantuan it can be seen crystal clear from the airport runway and old Dubai.

I really adore the architecture which incorporates modern and Islamic designs which carries a distinct touch that represents the Muslim majority in UAE.

The building is standing at about 800m high and even from far it does look near due to its monumental size. So if you ever ask me if I have ever been cheated in Dubai; I'd say yes. The sizes did. Even on Google map everything looks so near, contrary to when I use it back home.

Back home, I'd key in a destination, it looks far but it's so close. Here in Dubai, it's the other way round for me! 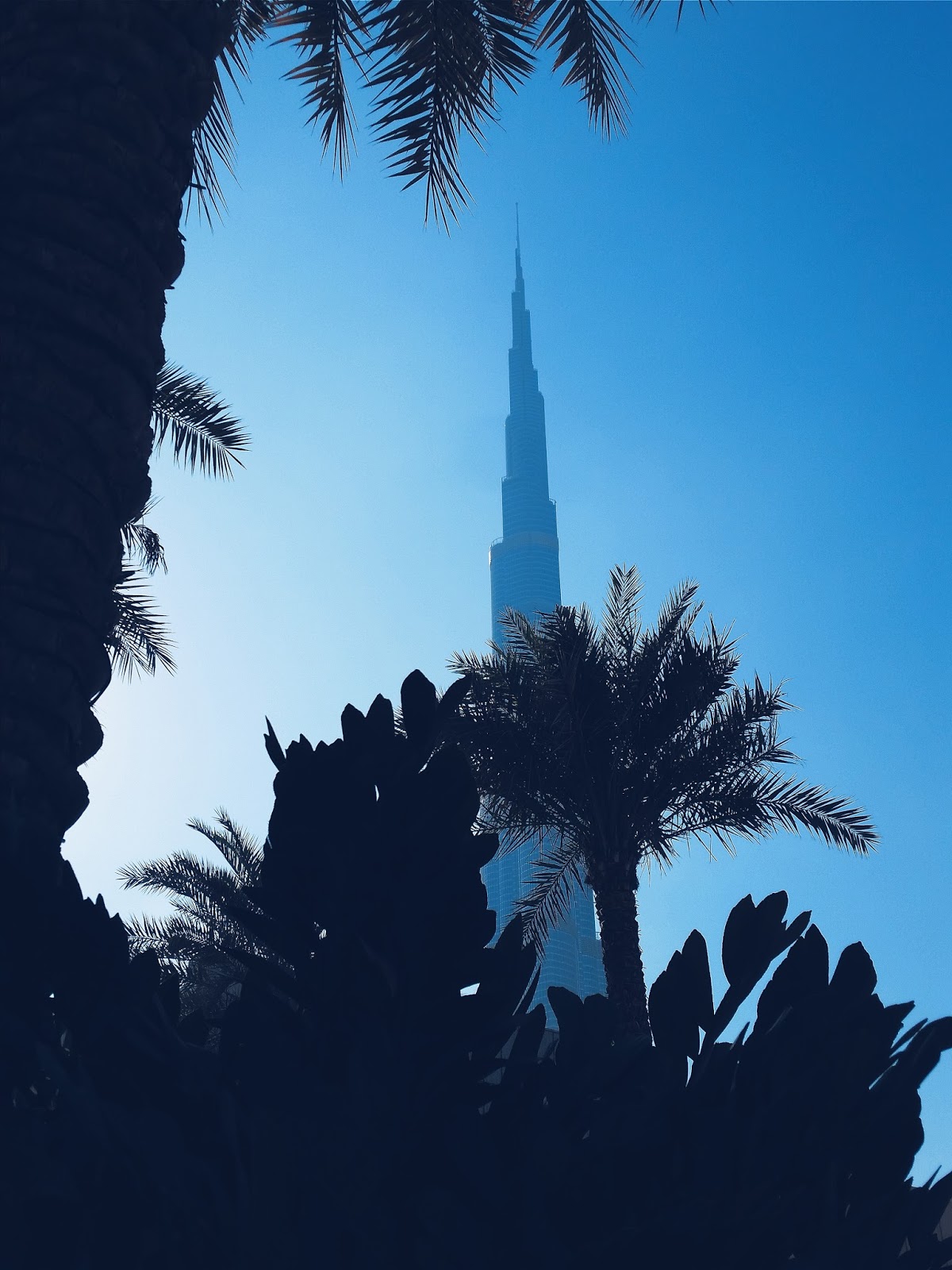 Cliche as it seems, this building was built as a symbol of their high aspiration, strength and progress. I've always wondered where does mine stand?

I think mine definitely stand beyond the height of Burj Khalifa. Only difference is - Burj Khalifa is always on the ground. If you get the pun. ;p 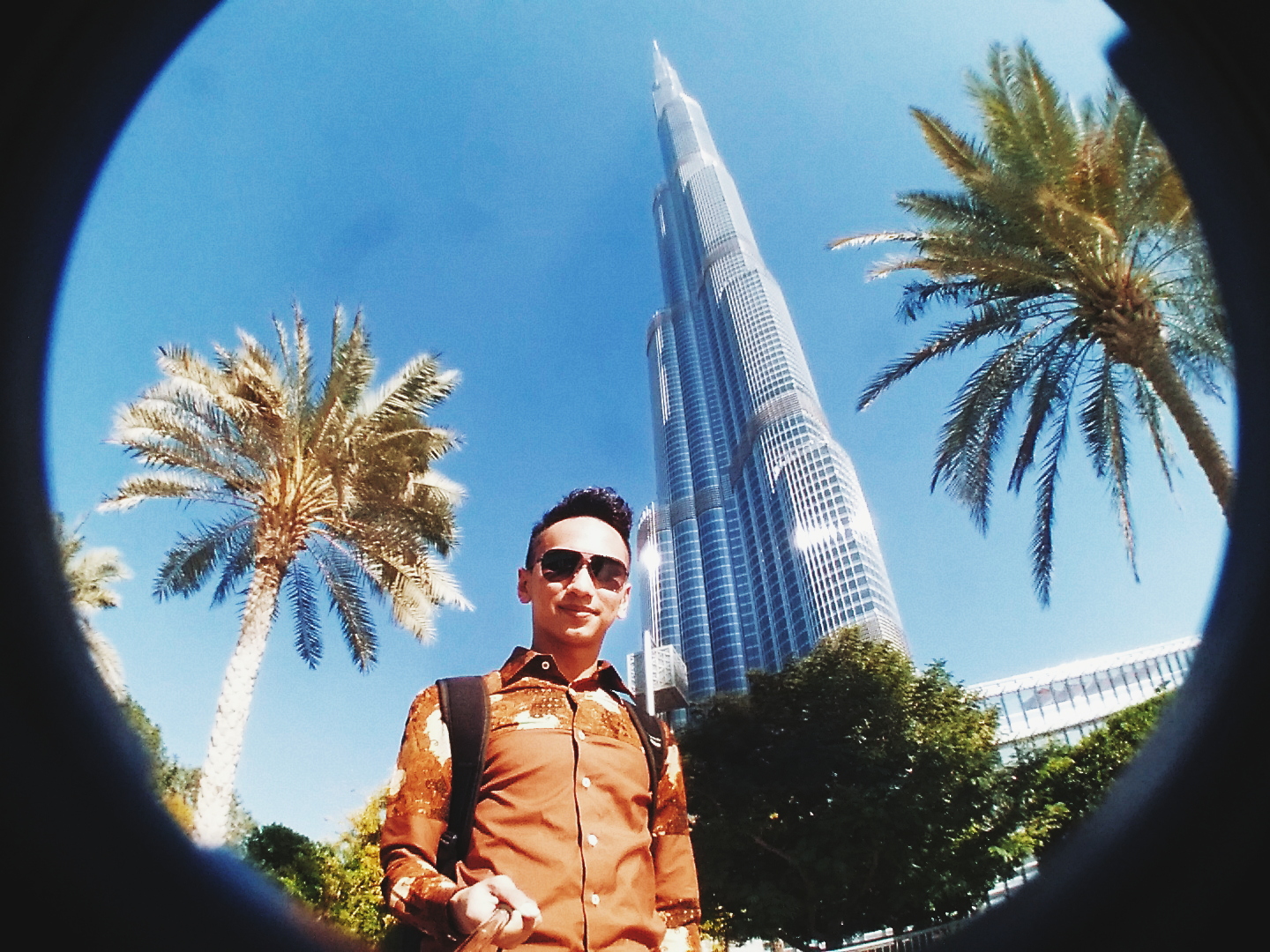 Nonetheless, it's always good to dream big because hadn't these Sheikhs who run Emirates done so, UAE's landscape will not be the same as what we see today. I probably would have never thought of going to Dubai if it had not been for these massive things that are beyond imagination! 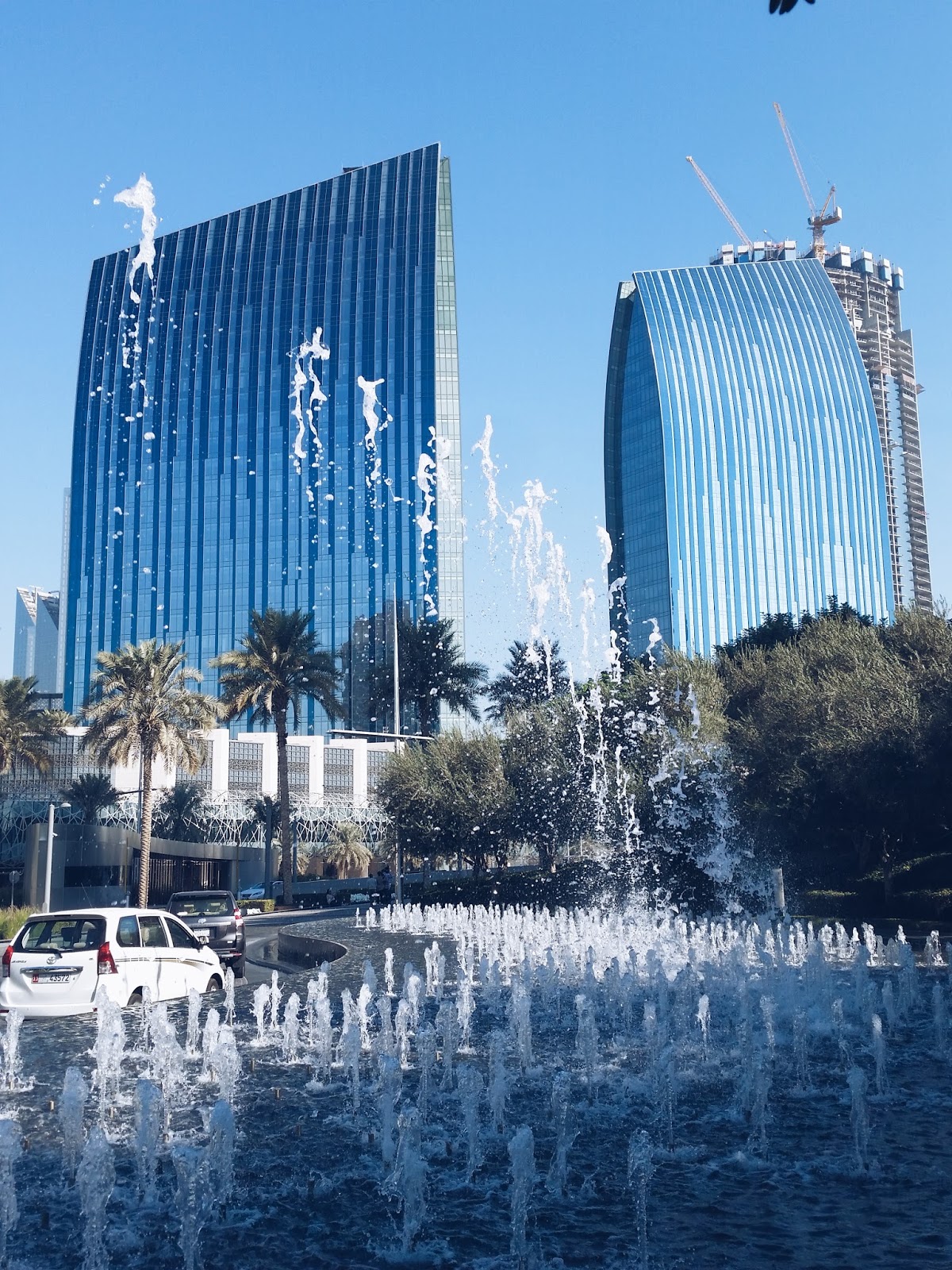 Dubai Mall
Before heading to Dubai Mall, we were delighted to be invited to indulge on traditional biryani; courtesy of Amin's cousin whom I found out actually an old acquaintance of mine! Small world! We then headed to Dubai Mall which was nearby (everywhere is so centrally located, just that everything is so huge it feels far) and I was so thankful that she came along. The mall is so huge I don't know where to begin! Since it was a Friday, the mall was very crowded. The aquarium, the zoo and even the drop-off was chaotic with tourists who came in busloads. 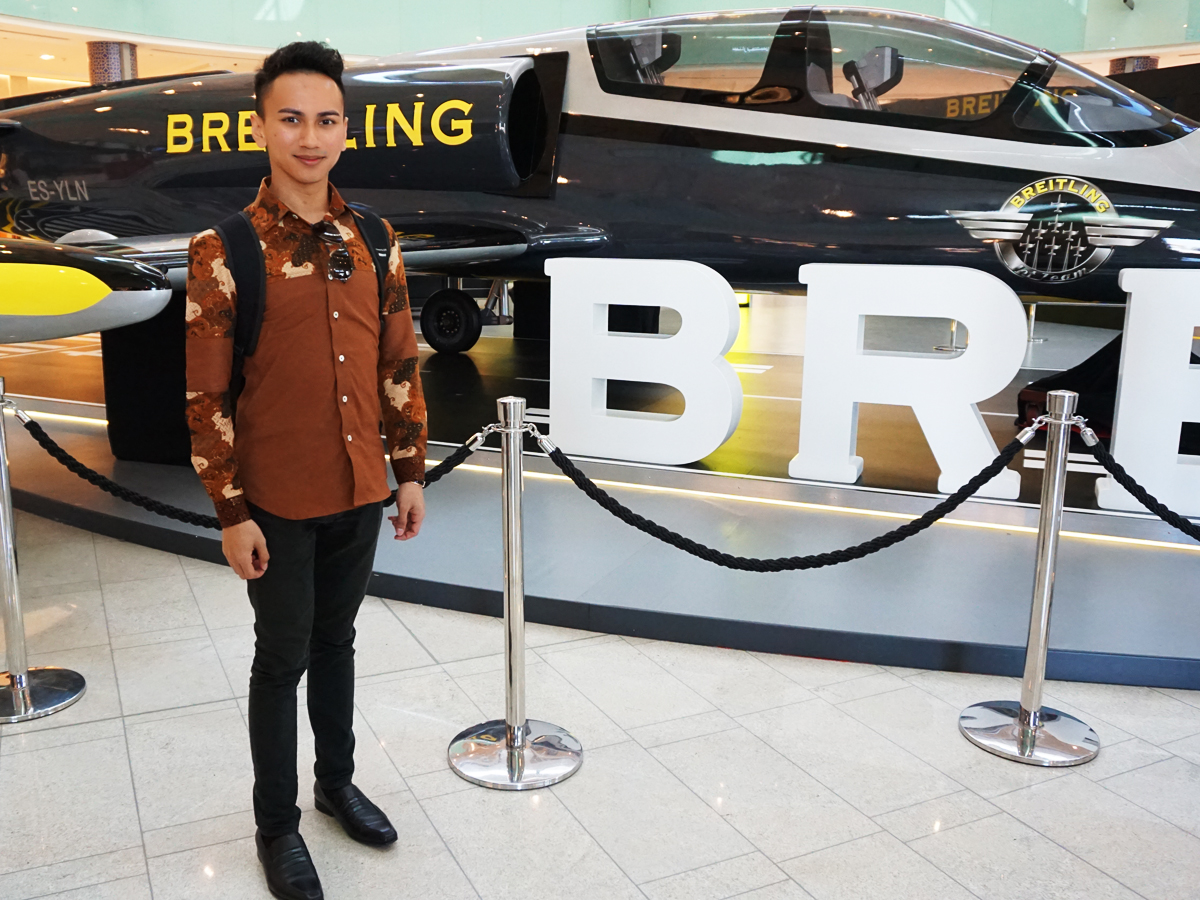 It was funny because there were so many muscle cars which were parked in front of the mall, it became a little bit like a tourist spot where you see people taking turns snapping photos and taking selfies the cars. It was already crowded and people were just adding on to the the jam at the entrance by loitering around taking selfies! What is it an auto show? Haha! Don't tell anyone that I got caught in the hype too. Shh! Where else you get such thing if not in a city where grandeur is a norm?

As you enter Dubai Mall main entrance, you will be greeted by this grand atrium and several pathways to choose from. It doesn't matter which way you go because it's a loop. If you had watched the documentary or learned it's architecture, it's designed in a weird way that there's a cut through in between the quadrant of the mall for easier access. Otherwise you will have to make one big turn just to turn back! 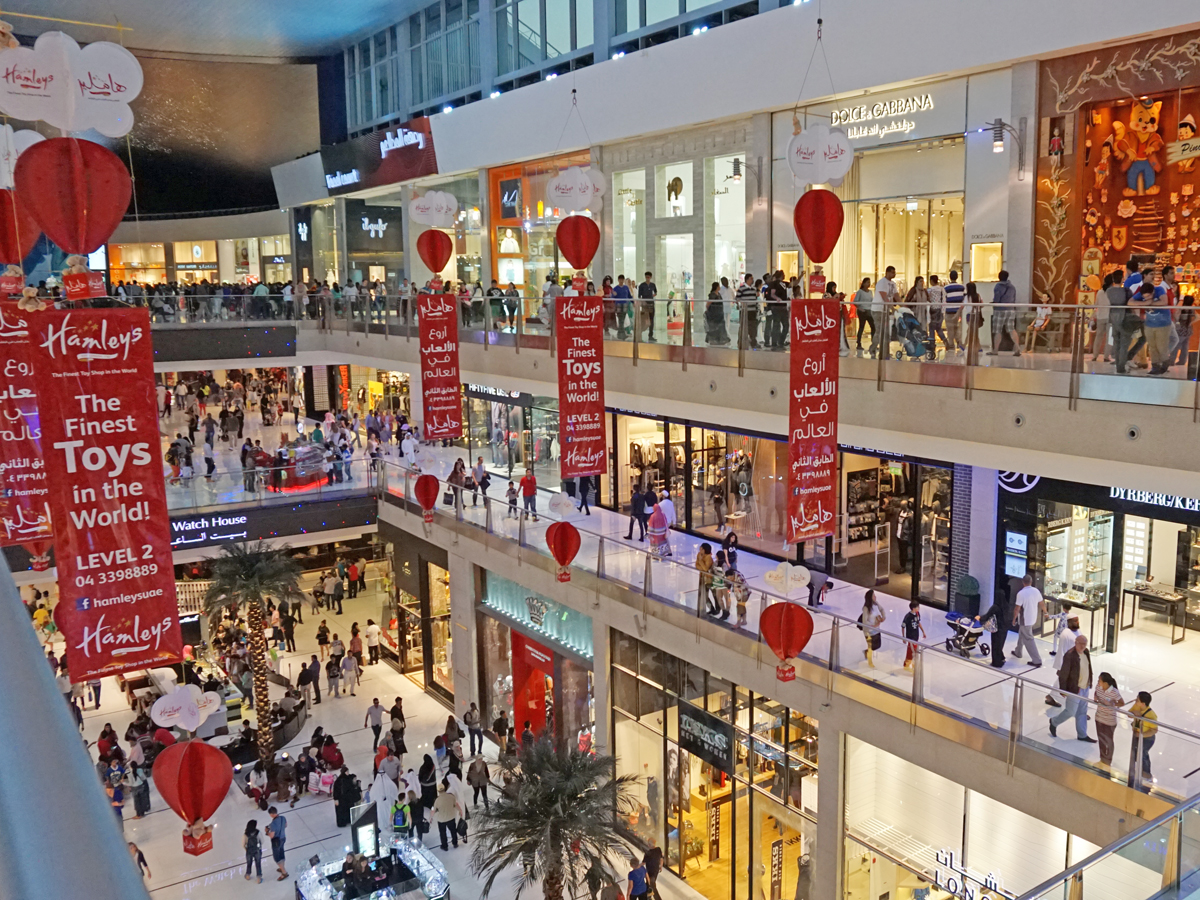 Dubai Mall - Bloomingdales
There were about 1,200 shops in that mall and without doubt Bloomingdales was my favourite. I like the fact that most of their house brand souvenirs are localized which makes it a very sophisticated Dubai souvenir. I pretty much got all my souvenirs there so that I do not have to think so much about them after that. People always ask why bother getting souvenirs - I can't help but to have my hands on those swarovski pencils with arabic writing that spells "Bloomingdales" and glittery Bloomingdales tote bag with ornate prints and even flip flops that says "Bloomingdales Dubai". Call me crazy but Bloomingdales in Dubai is the only Bloomingdales outside of US! 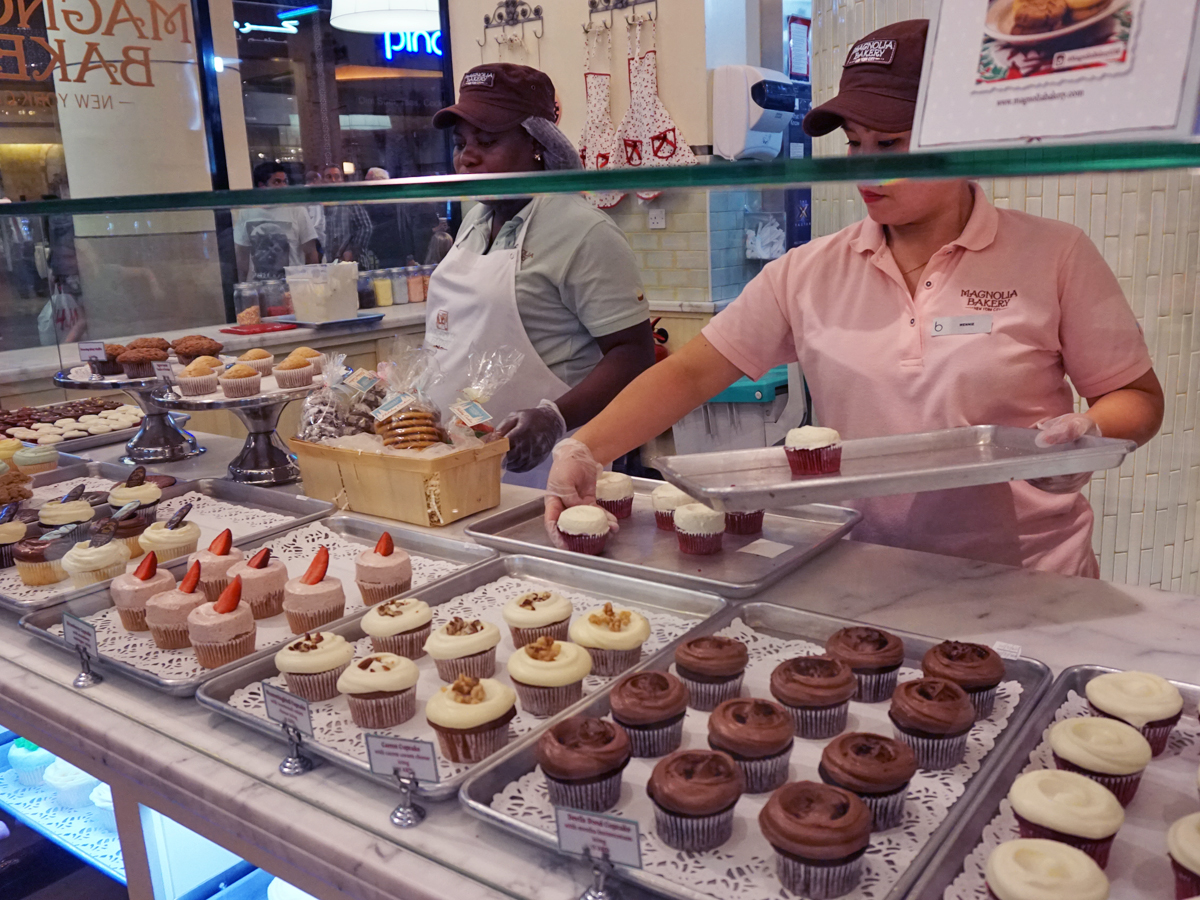 While I was there, I had the chance to try on one of their best selling cupcake; the Red Velvet Cheesecake. It's so rich and delicious! You can order them and dine in by the water fountain in the departmental store. 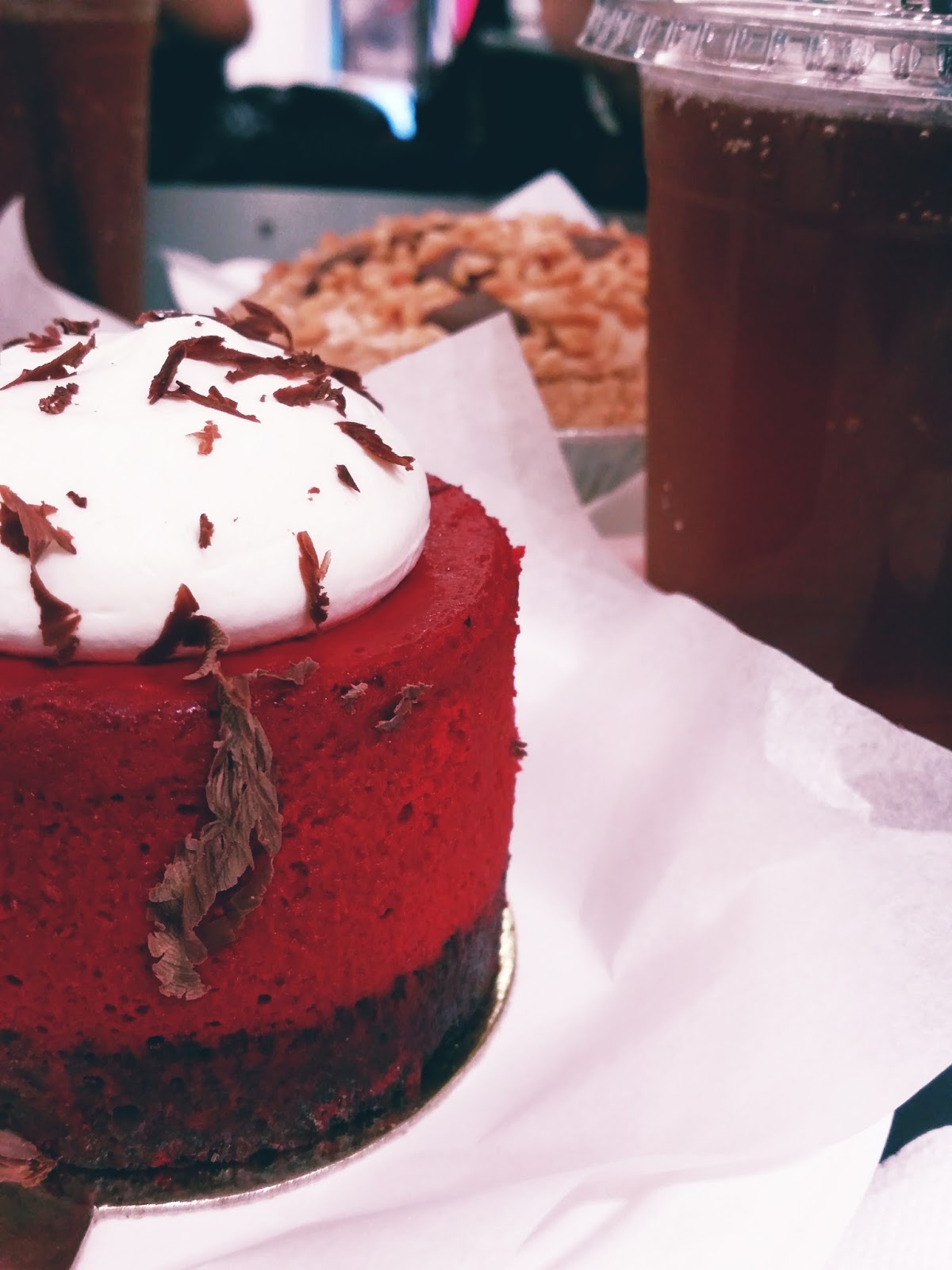 Dubai Mall - The Souk
To give Dubai mall the Emirati identity, a part of the mall has a commercialized, modern and glitzy souk called The Souk. It has Turkish eateries like Mado, classic Arab perfumes and lotions, and even plush Arabian carpets. If you are not a fan of street shopping, The Souk is an awesome place to go to experience traditional shopping, the classier way. 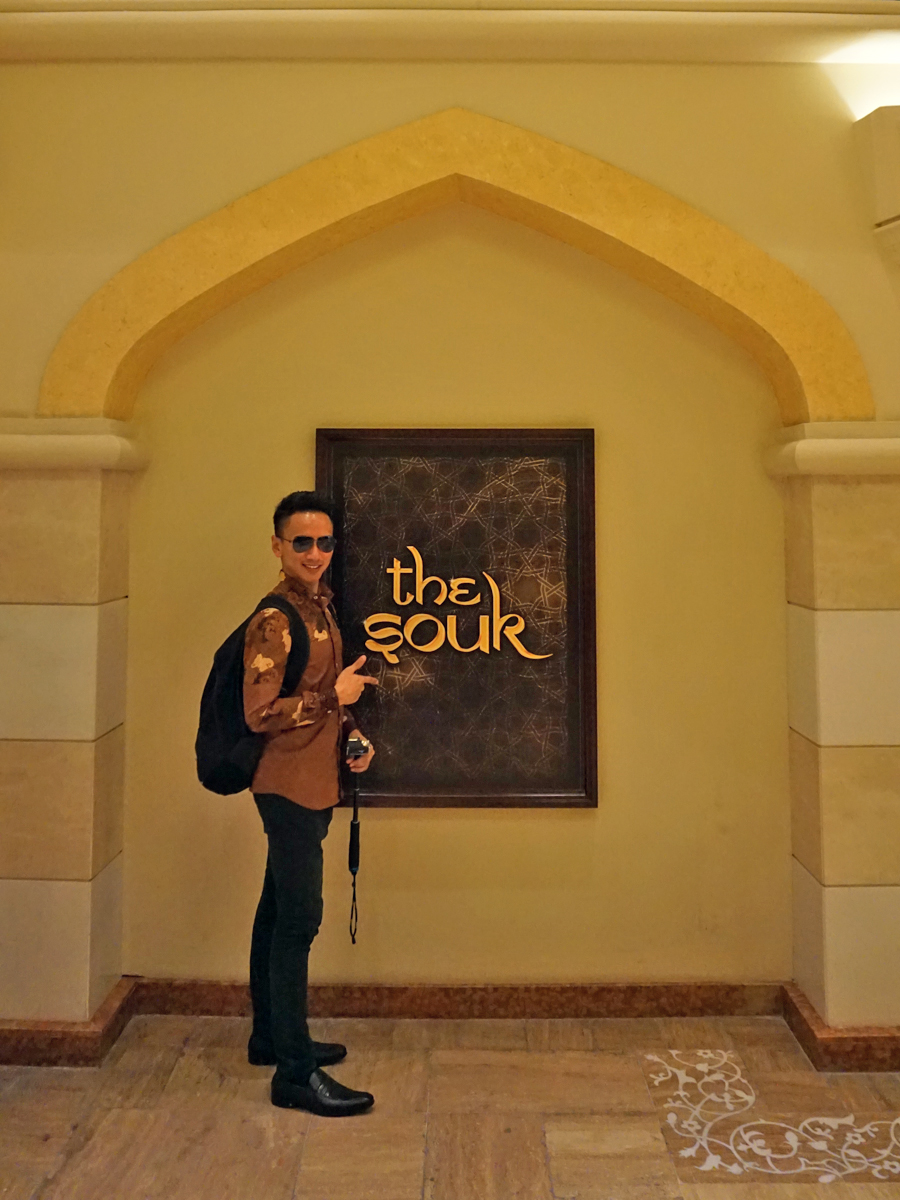 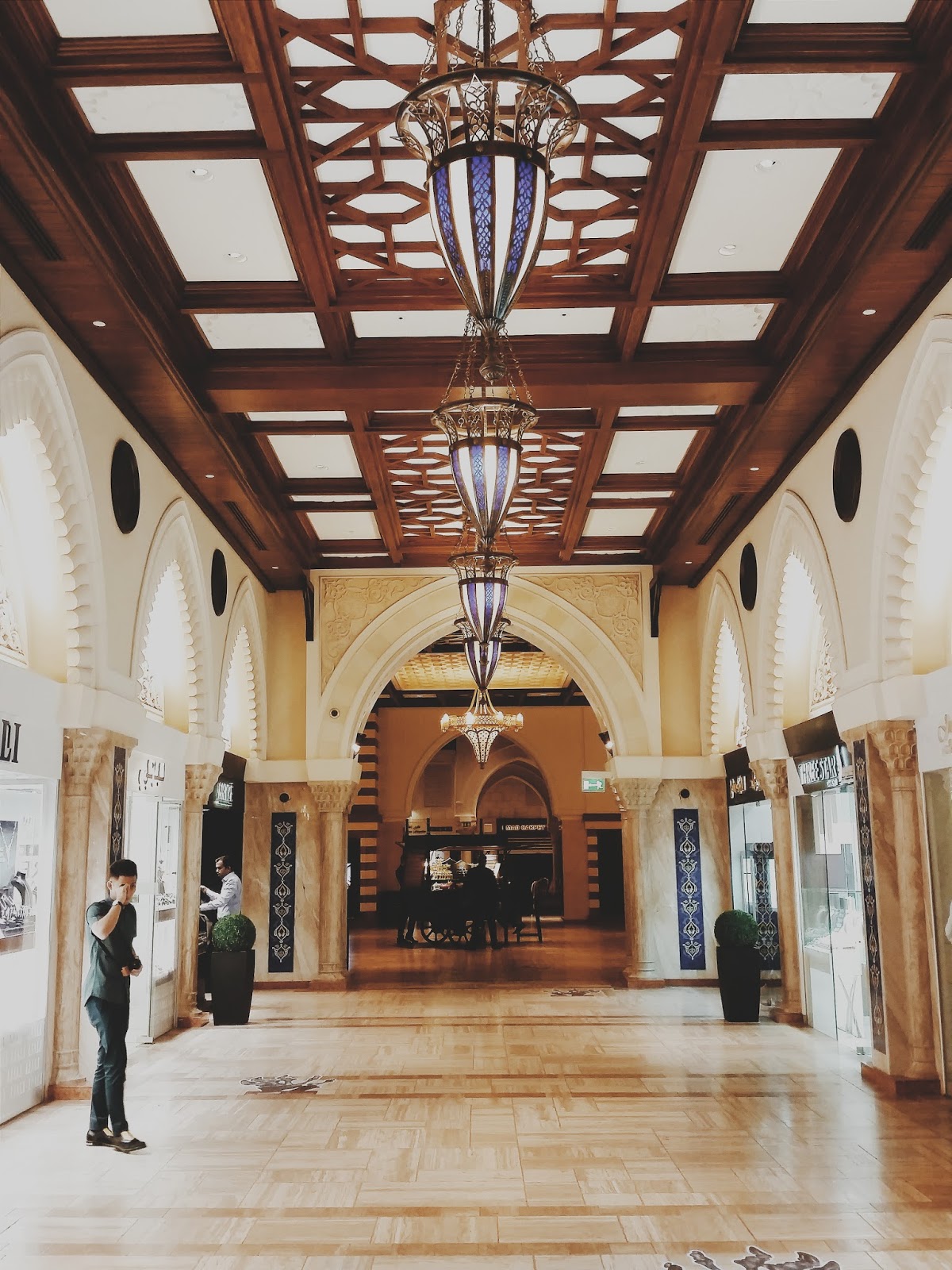 Got myself Arabian white oud attar; it is a fragrance oil mainly used as perfumes. Attar comes from natural sources; it works and last much longer than synthetic perfumes! 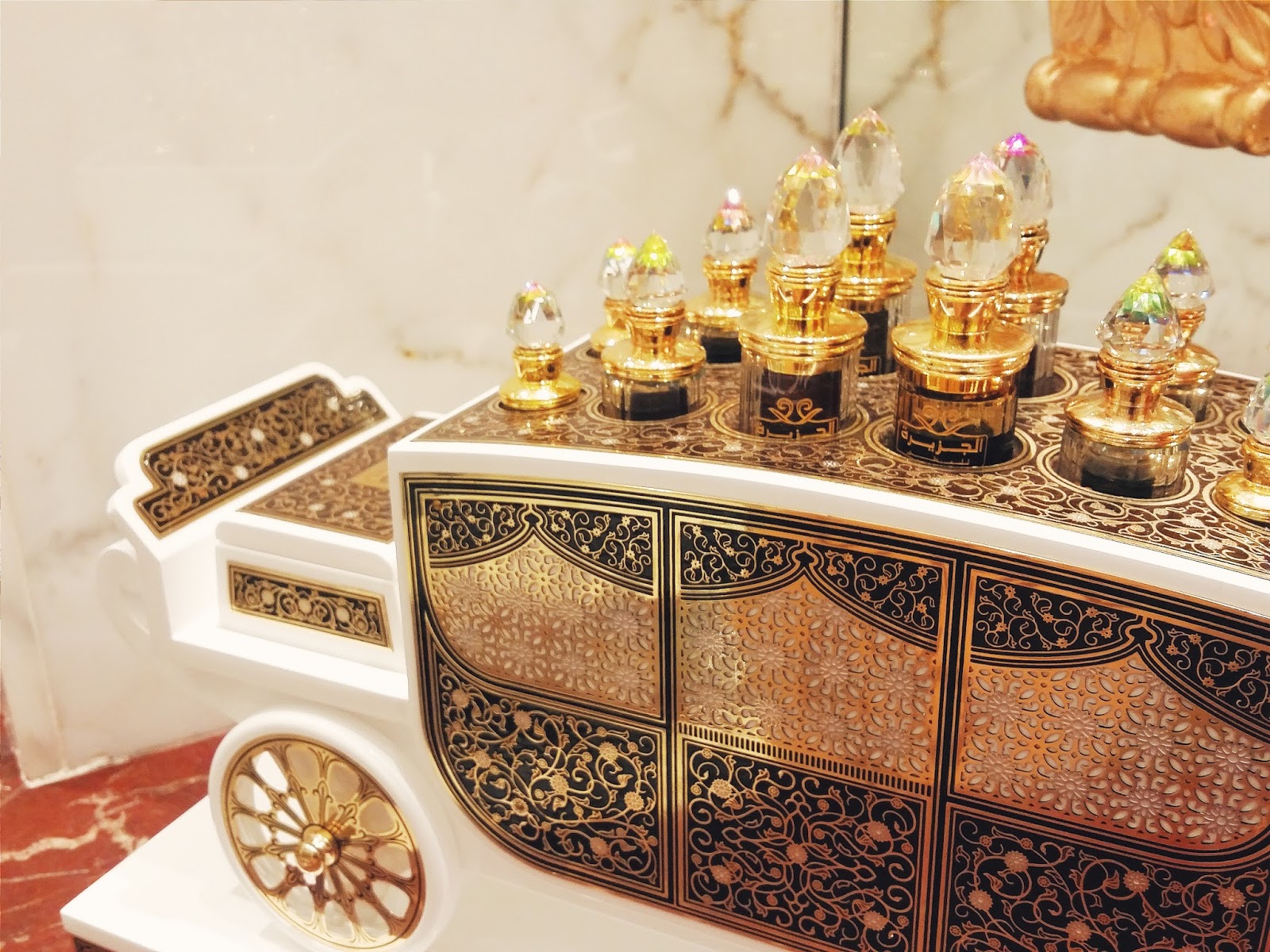 If you are not a fan of shopping on holiday, there's always sightseeing catered for you in Dubai Mall! Probable sole purpose is to keep you there while waiting for others to shop! LOL.


Dubai Mall - Dubai Aquarium and Underwater Zoo
The Dubai Mall Aquarium has one of the largest acrylic panel to contain about 30,000 animal displays in the 10 million litre tank. Major! Downside, it's not worth it to go on a weekend when it's so crowded because it's not exactly as huge as the one in Singapore and the queue for the ticket was so long! If you are jaded with what you see at S.E.A Aquarium in Singapore, The Dubai Mall aquarium is just another tank. 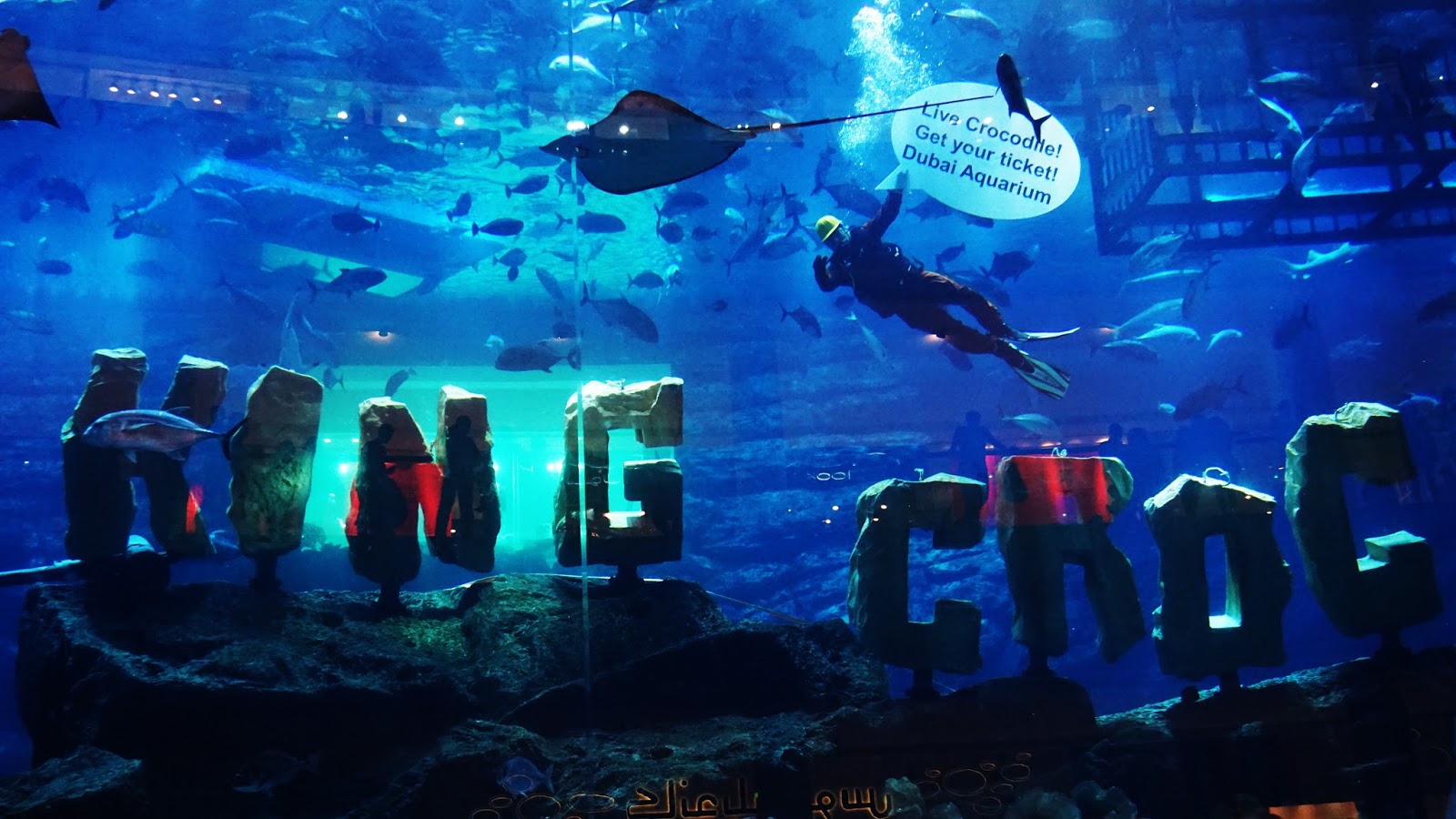 Nevertheless, it's always nice to be able to gaze at the tank from three levels of the mall!

The Level Shoe District in Dubai Mall is divine and one of a kind! The forward-looking dedicated shoe district sure has a head-turning new take on shoe fashion, art and design. There you get to discover the latest trends of each season from over than 300 brands catering to all target market; men and women.

The place even have amenities for personal shoe styling, restoration and even fashion cafe!

If you are there, you might want to explore VOGUE Cafe, and check out the limited editions the Level Shoe District carries. 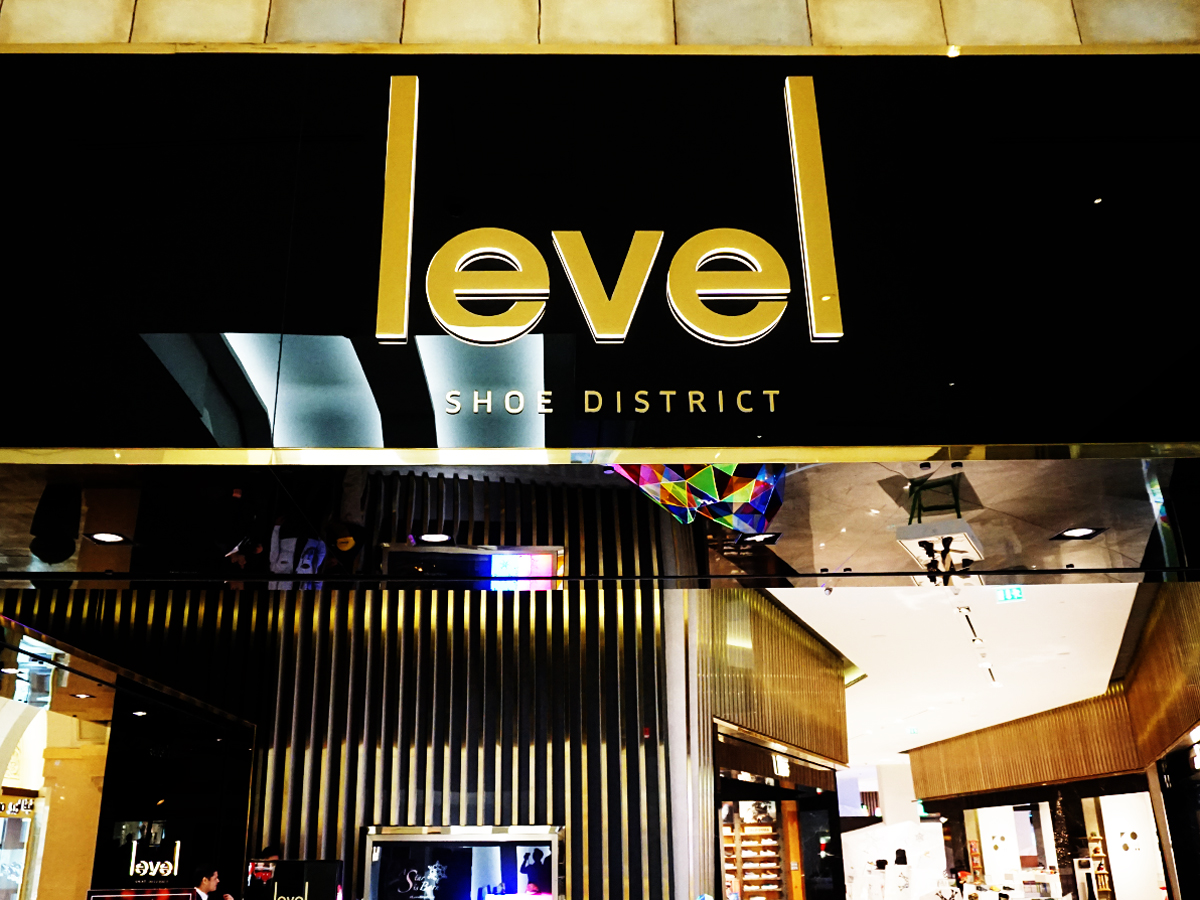 The Burj Khalifa Lake and Dubai Fountain
While most tourist tend to straight away marvel at the Dubai Fountain which is to date the largest choreographed water fountain laid at 275m, do not miss giving an awe to the largest man-made lake at the the Burj Khalifa Lake. Built over an area of 30 acres, this lake links to the Dubai Fountain which pumps 83,000 litres at one time to more than 70m. Considerably high but it is not even a tenth of the towering height of Burj Khalifa! I don't think the word small, short, or cheap ever appears in the Dubai's vocabulary. 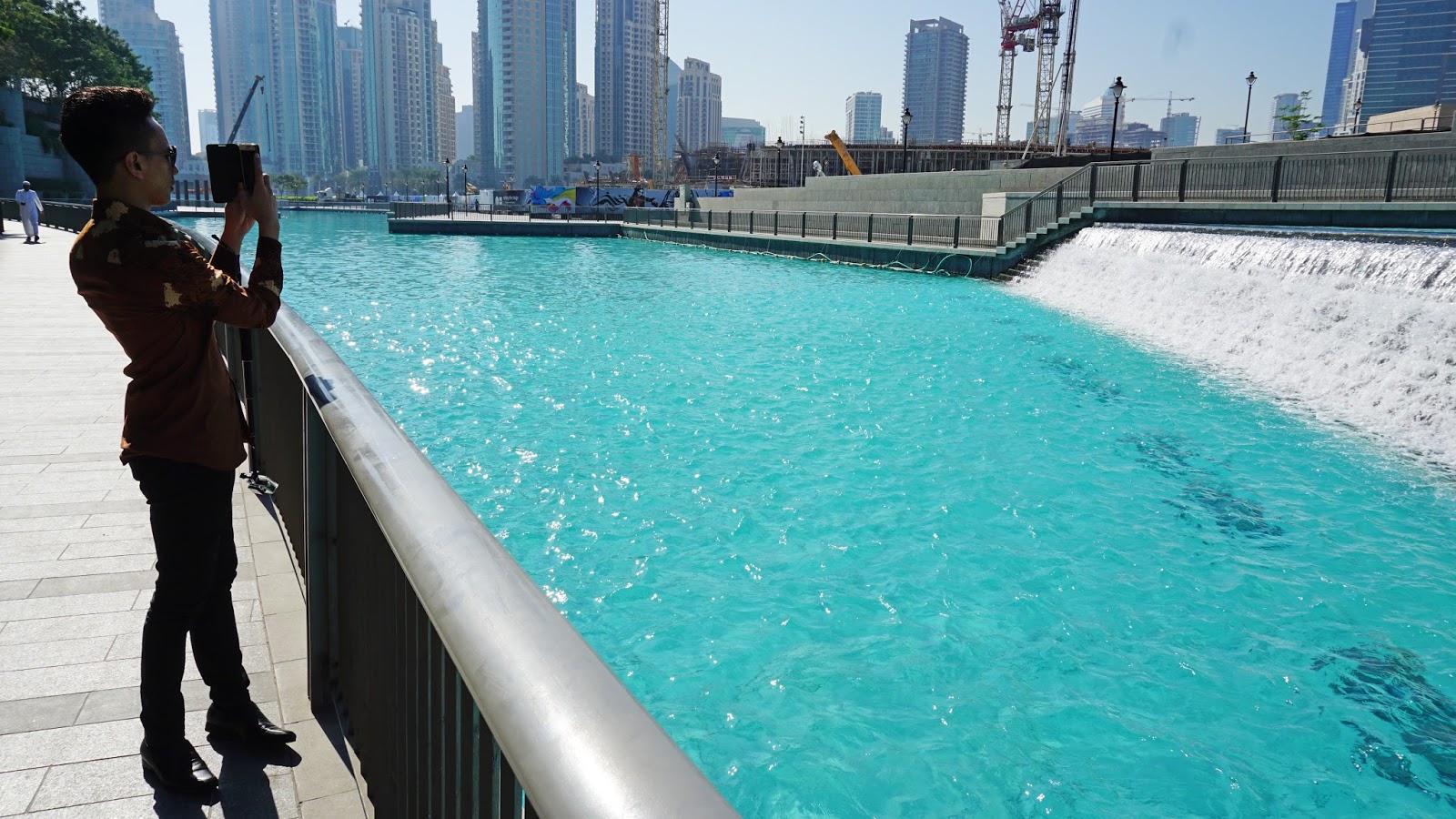 You can always relax by the al fresco cafes along the Dubai Fountain to enjoy the more than 30 synchronized music performance half hourly in the evenings and enjoy the waters dancing to the tunes of the music with amazement. You will definitely hear a round of applause at every end of its spectacular show! 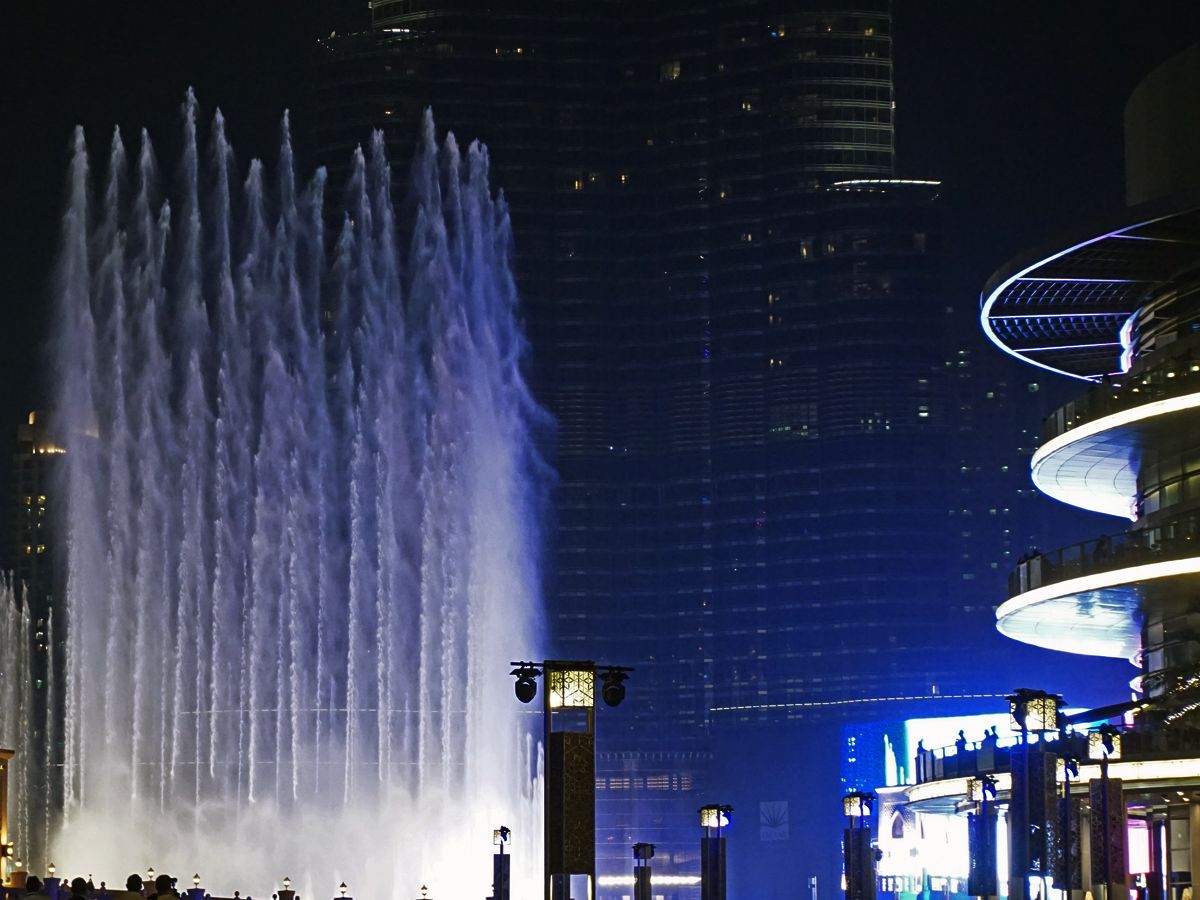 In the mean time before next update, enjoy a number by the Dubai Fountain. One of my favorites!