Abu Dhabi is definitely not short of places of interest, if you think now it's a handful, there's more to come in 2-5 years time and I am really excited for it! As for now, if you are going to Abu Dhabi within these 2 years, here are the places that I think you should really, really visit and get some culture.

Sheikh Zayed Grand Mosque
Sheikh Zayed Grand Mosque was initiated by the late president of the United Arab Emirates (UAE), HH Sheikh Zayed bin Sultan Al Nahyan, who wanted to establish a structure which unites the cultural diversity of Islamic world, the historical and modern values of architecture and art. Following his passing, his mausoleum is located on the grounds beside the mosque. The intricate mosque was constructed in 12 years. It is by far the largest mosque in the UAE! 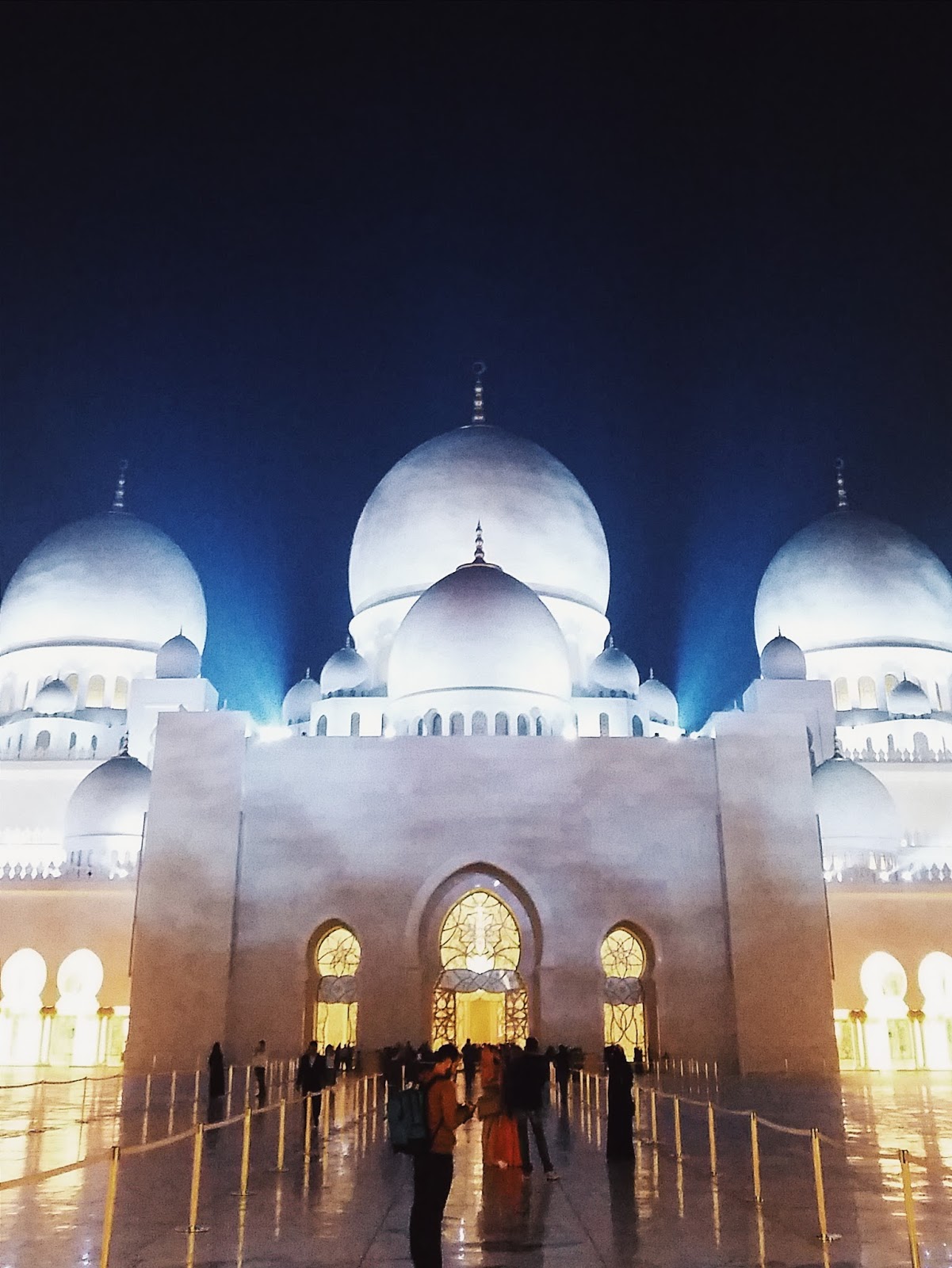 The mosque can fit 40,000 worshipers. Attracting visitors from all over the world, it plays a pivotal role in putting Abu Dhabi on the tourist map. 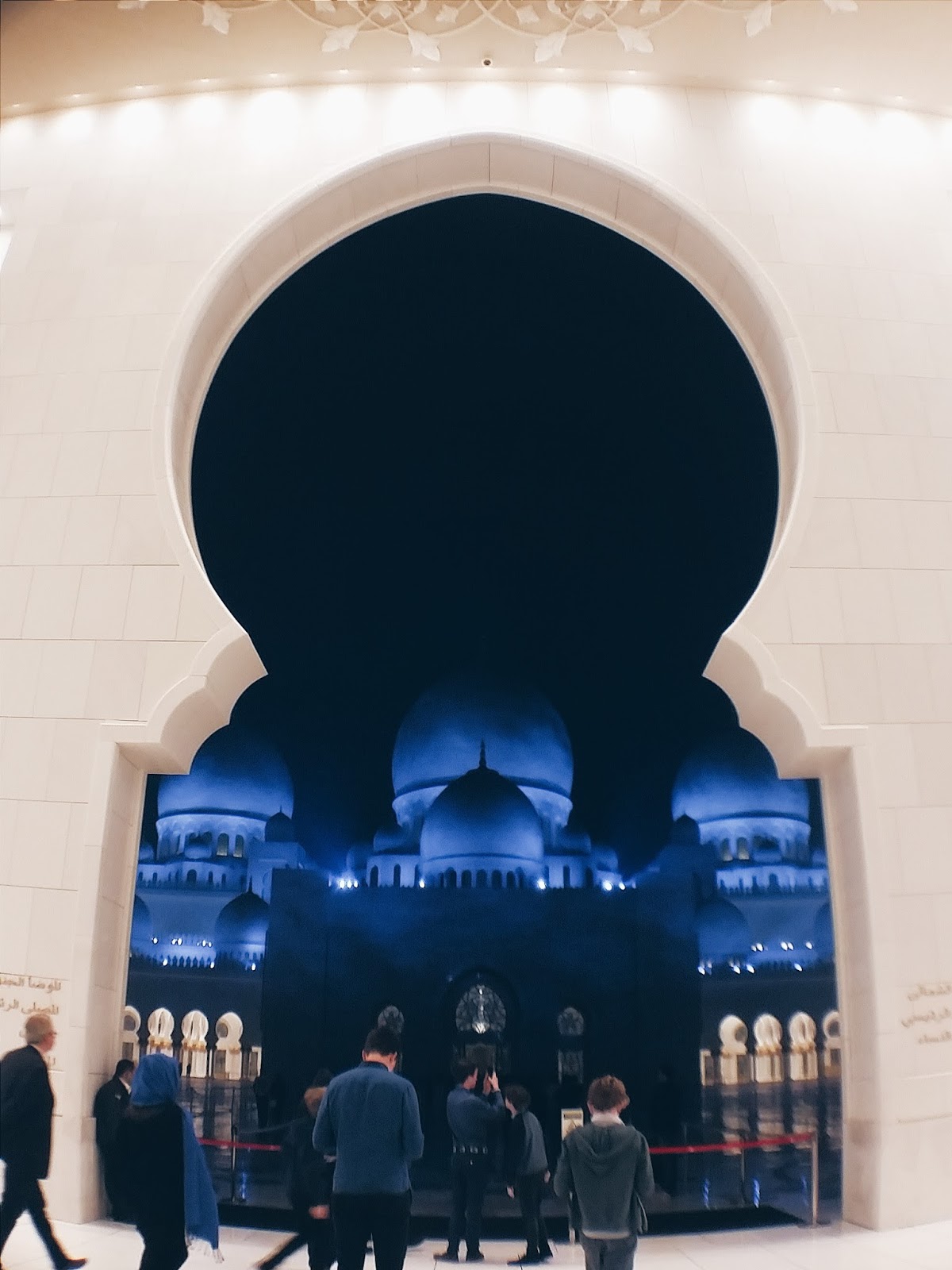 The concept of diversity is personified in Sheikh Zayed Grand Mosque, a majestic marvel that reveals a spectrum of architectural splendors formulating a harmonious unity between different Islamic architectural schools. The mosque also includes a variety of post-modern architectural designs enriching its historical Islamic tastes.

This is amplified through its architecture that was inspired by Persian, Mughal and Moorish designs, and uses building materials that came from all over the globe. The mosque seeks to highlight the heritage of late Sheikh Zayed and to commemorate his memory, his qualities and his contributions to the Emirates. 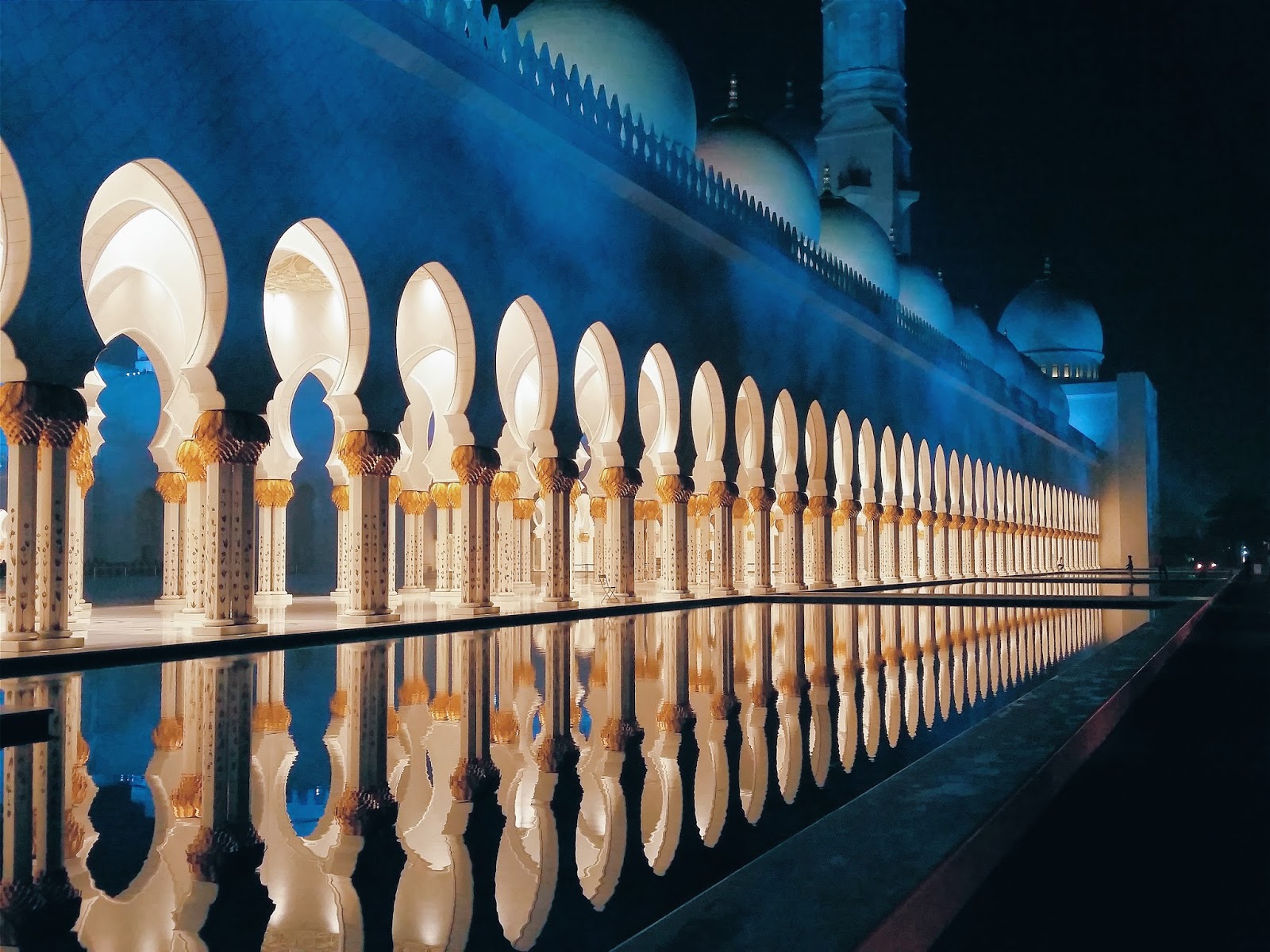 Sheikh Zayed mosque even has a library of more than 5,000 scientific and cultural titles in more than a dozen languages, including a collection of precious and rare books dating back from 200 years ago. It is equipped with modern facilities for the development of research and knowledge that can facilitate the public understanding of Islamic civilization, arts and architecture. 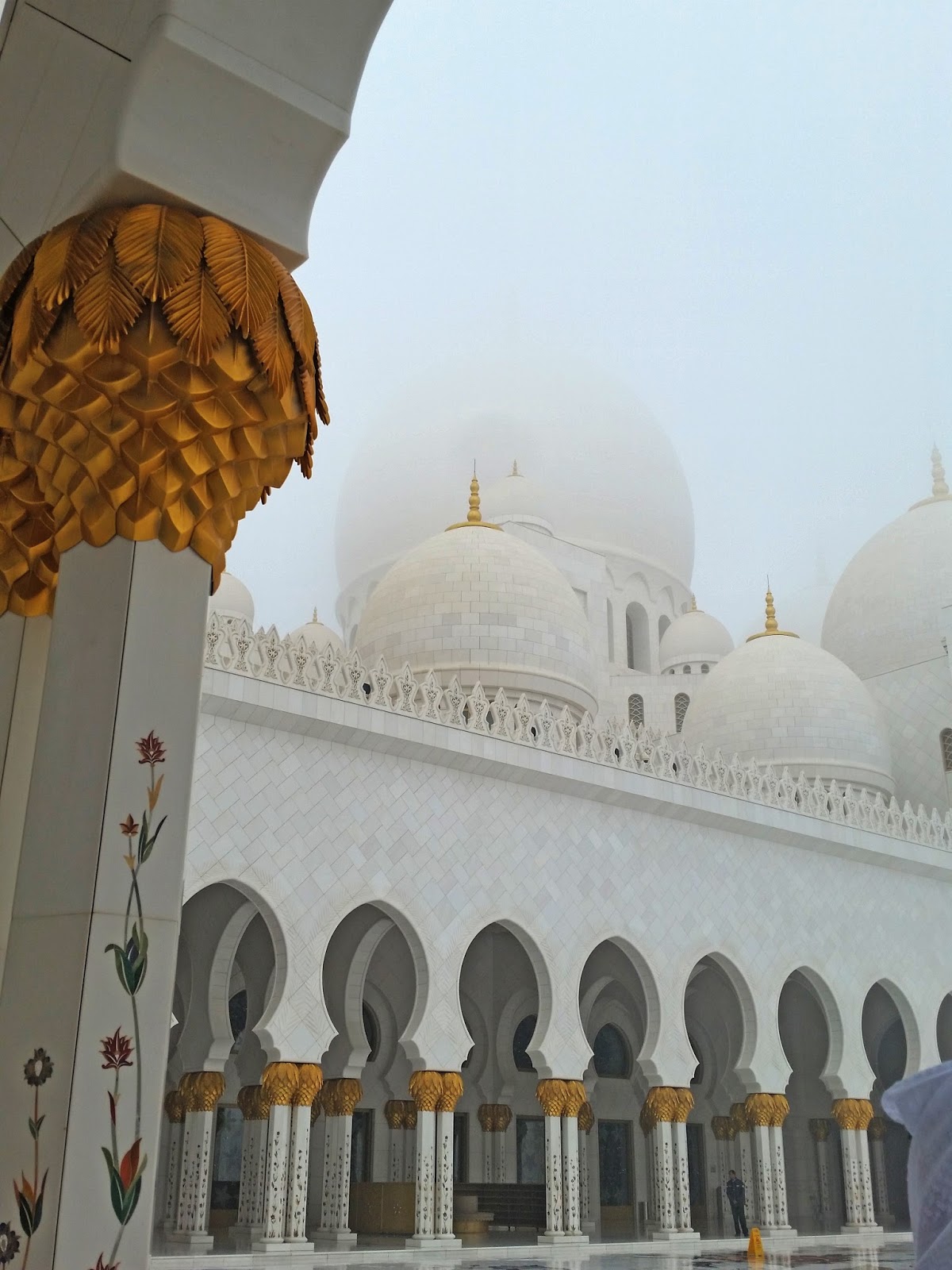 If you are visiting in groups, you can always arrange for a special tour here because going there by yourself without knowledge about Arab-Islam civilisation and culture may hamper your appreciation towards the architecture. It may be too big beyond your comprehension on the significance of its existence. 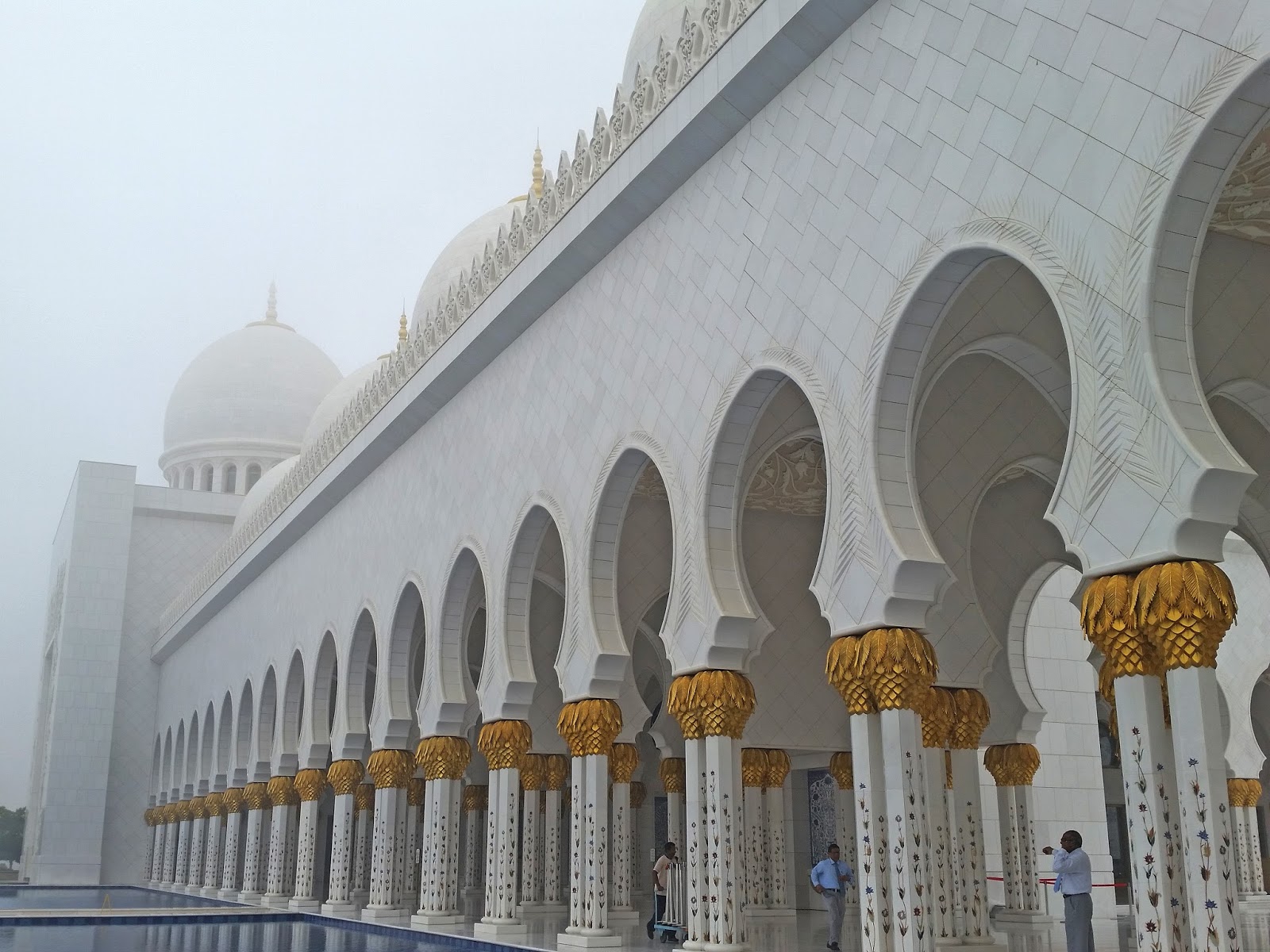 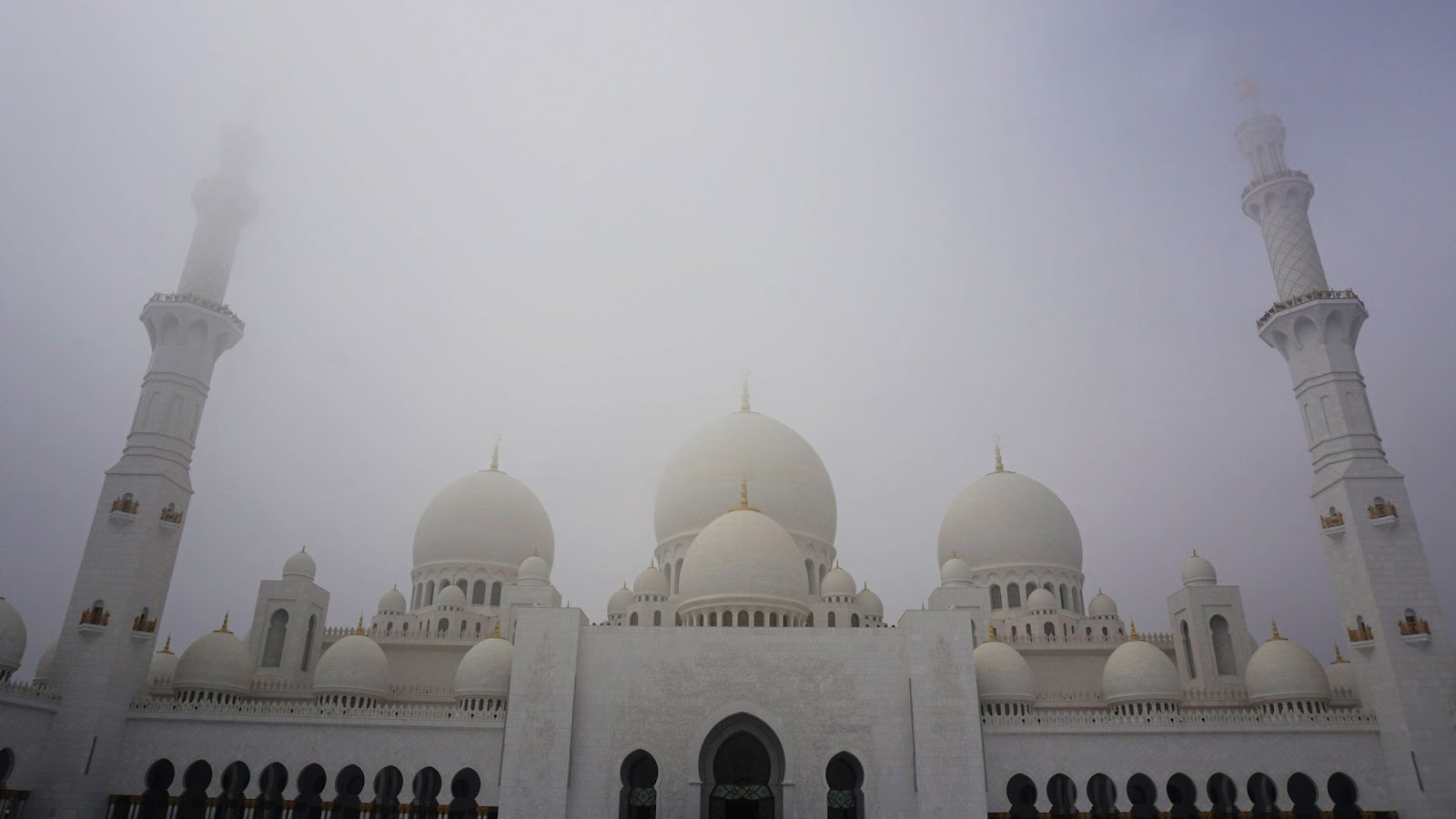 Tiles of white marble clads the external walls and columns and features relief carving of verses from Holy Quran and Islamic ornamentation. 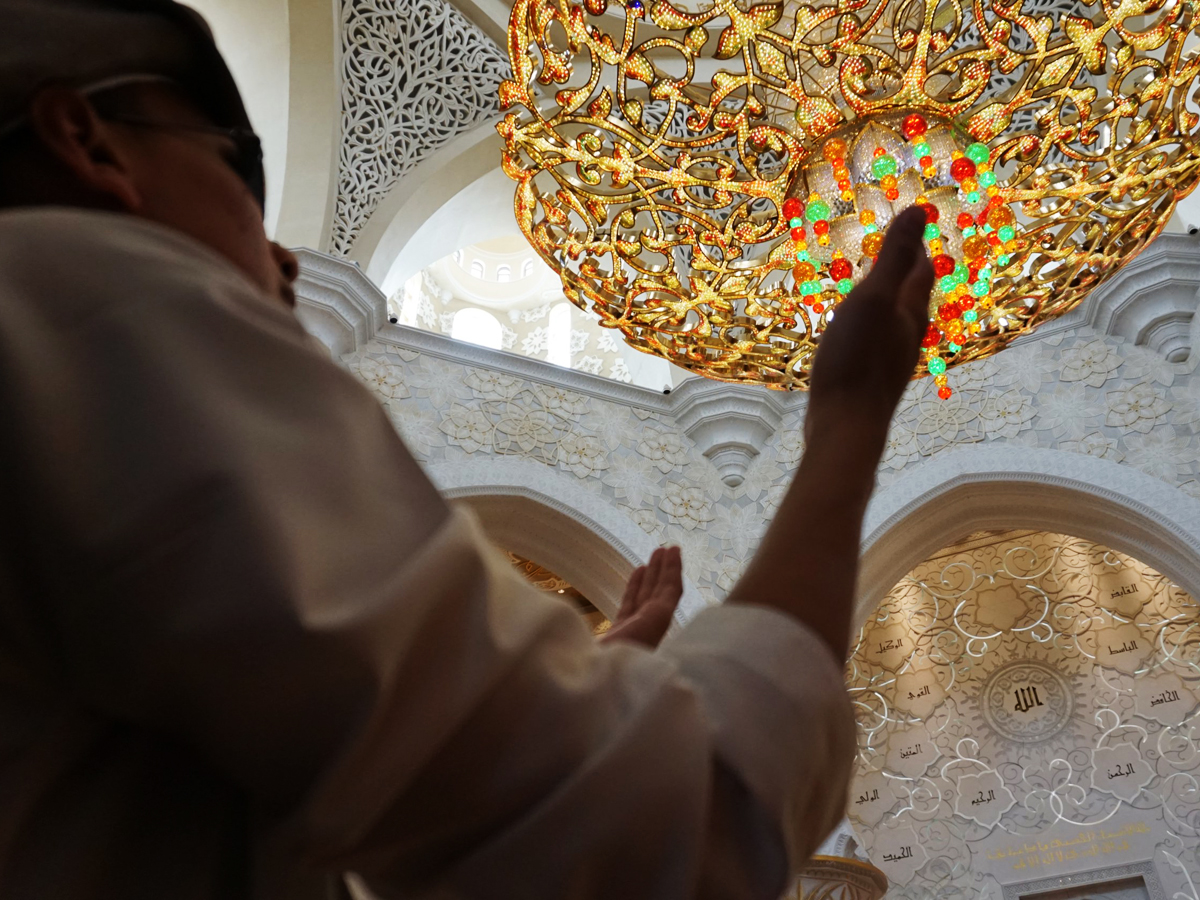 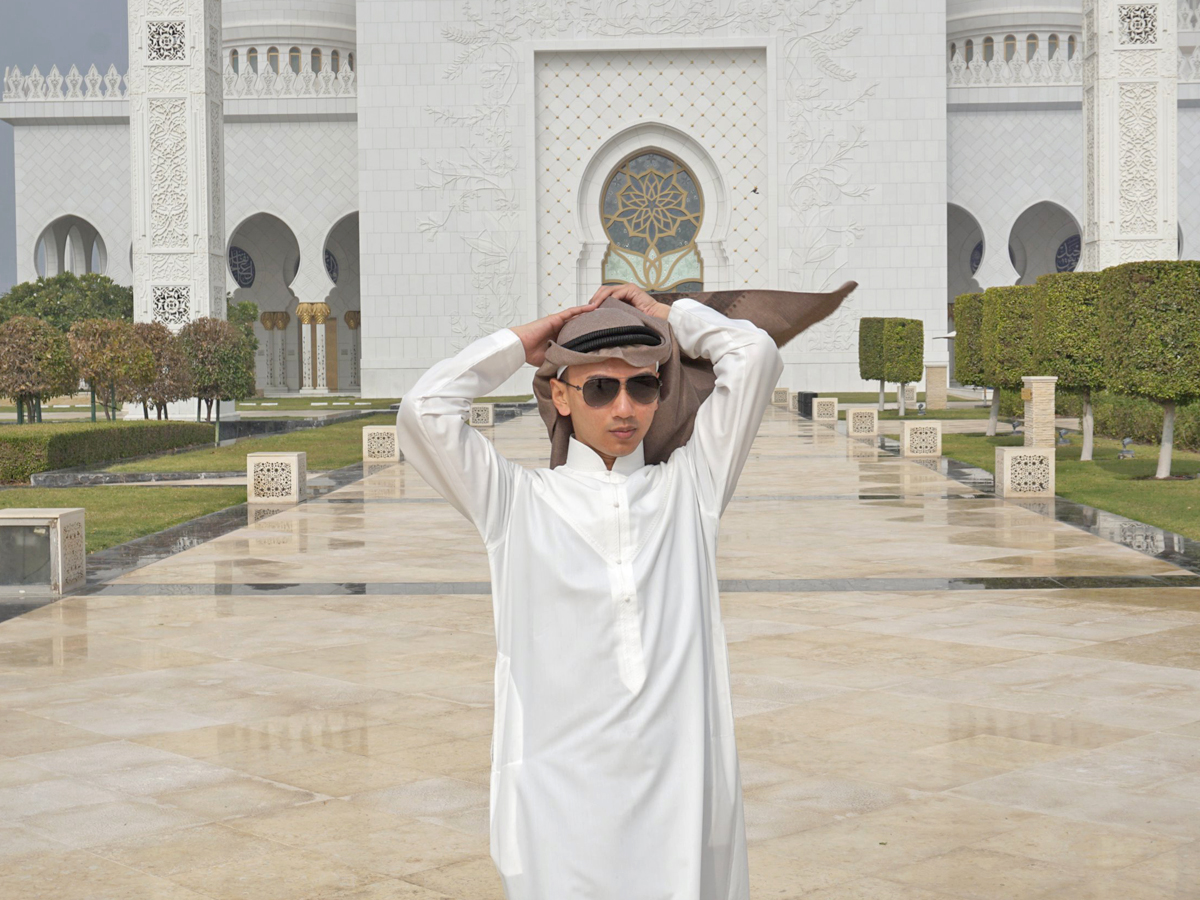 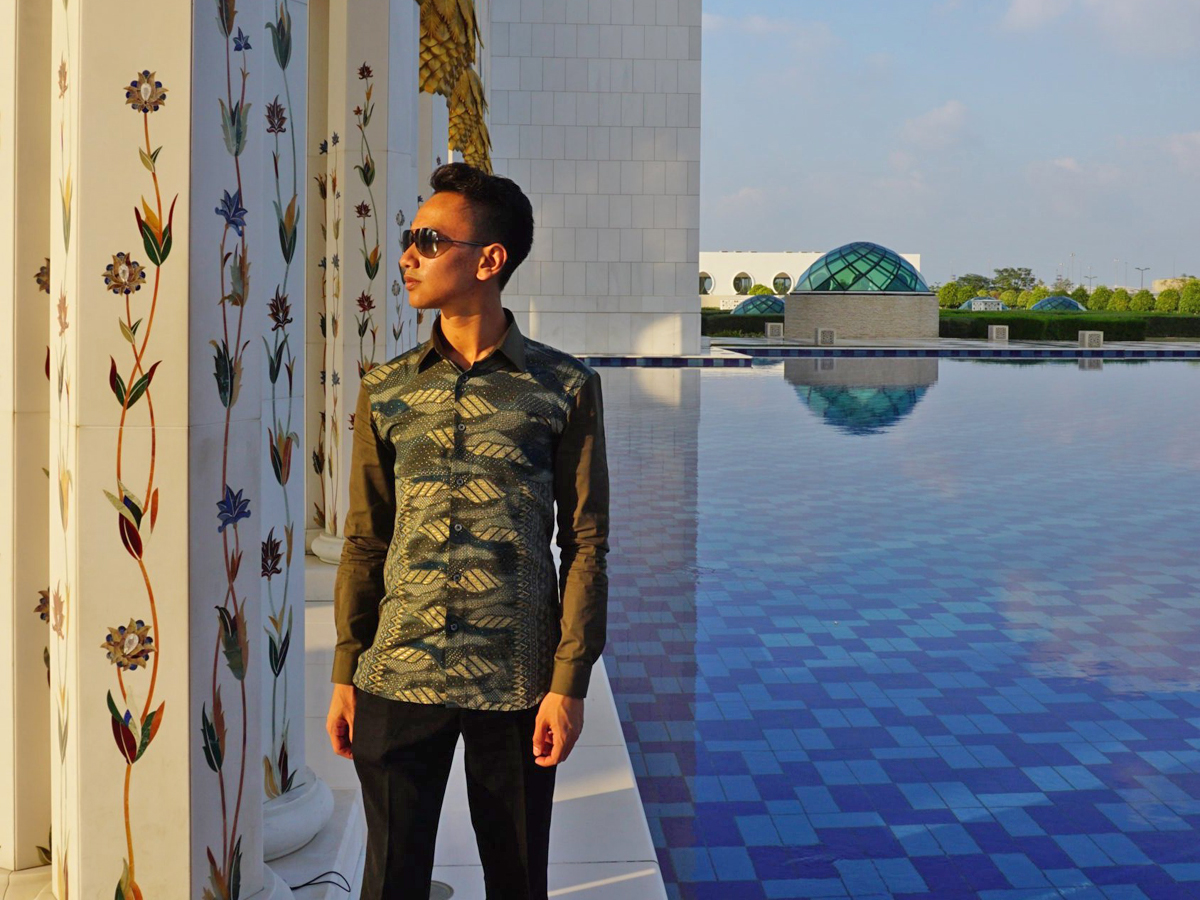 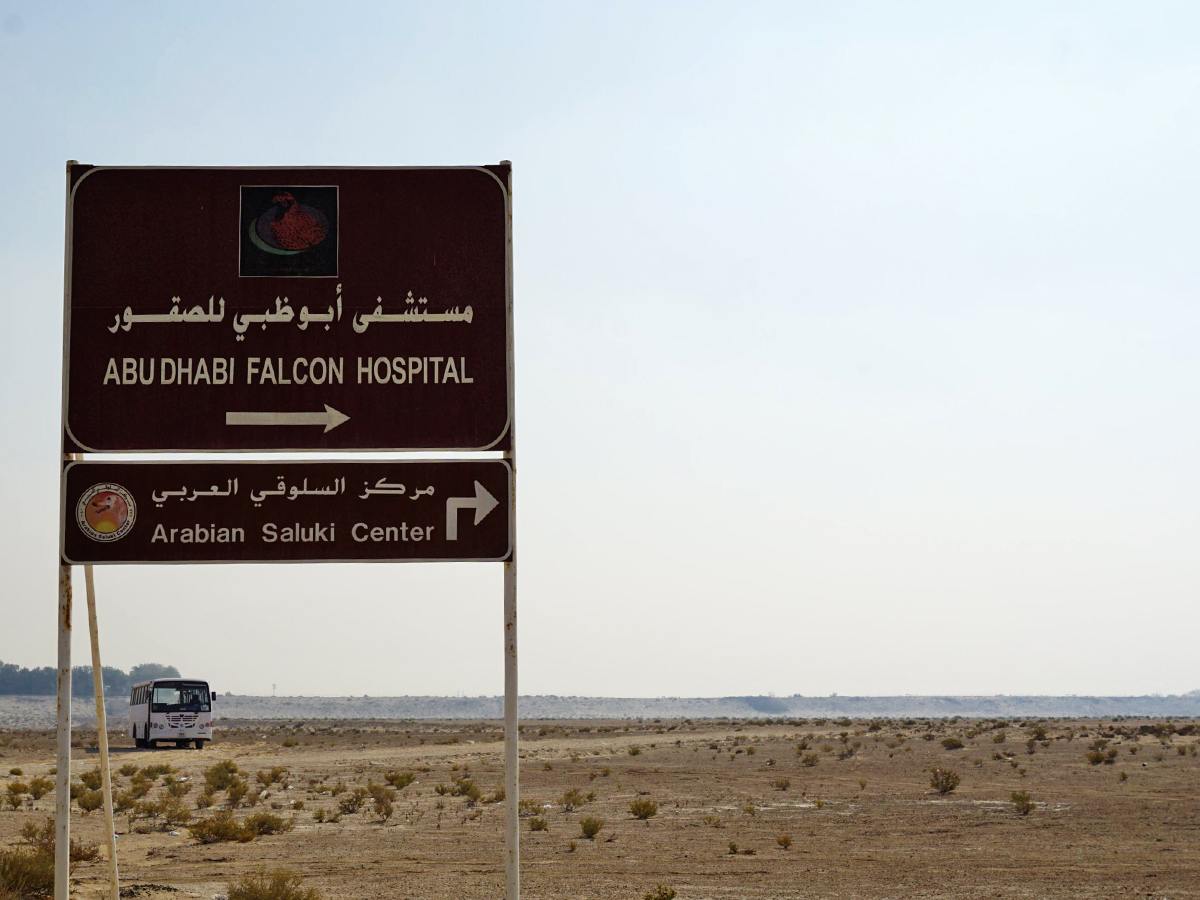 It's funny that when I got back, people kept asking why the hell would I visit hospital for animals? Like there's not enough animals here back home?

UAE's national bird, the falcon, is a symbol of strength, courage, pride, grace, and force. It is prominent it UAE's emblem as falconry goes way back to more than 2000 years ago which centres around the bedouin life of Arabs.

So it's always good to learn about how birds can be politicised in one's everyday life! 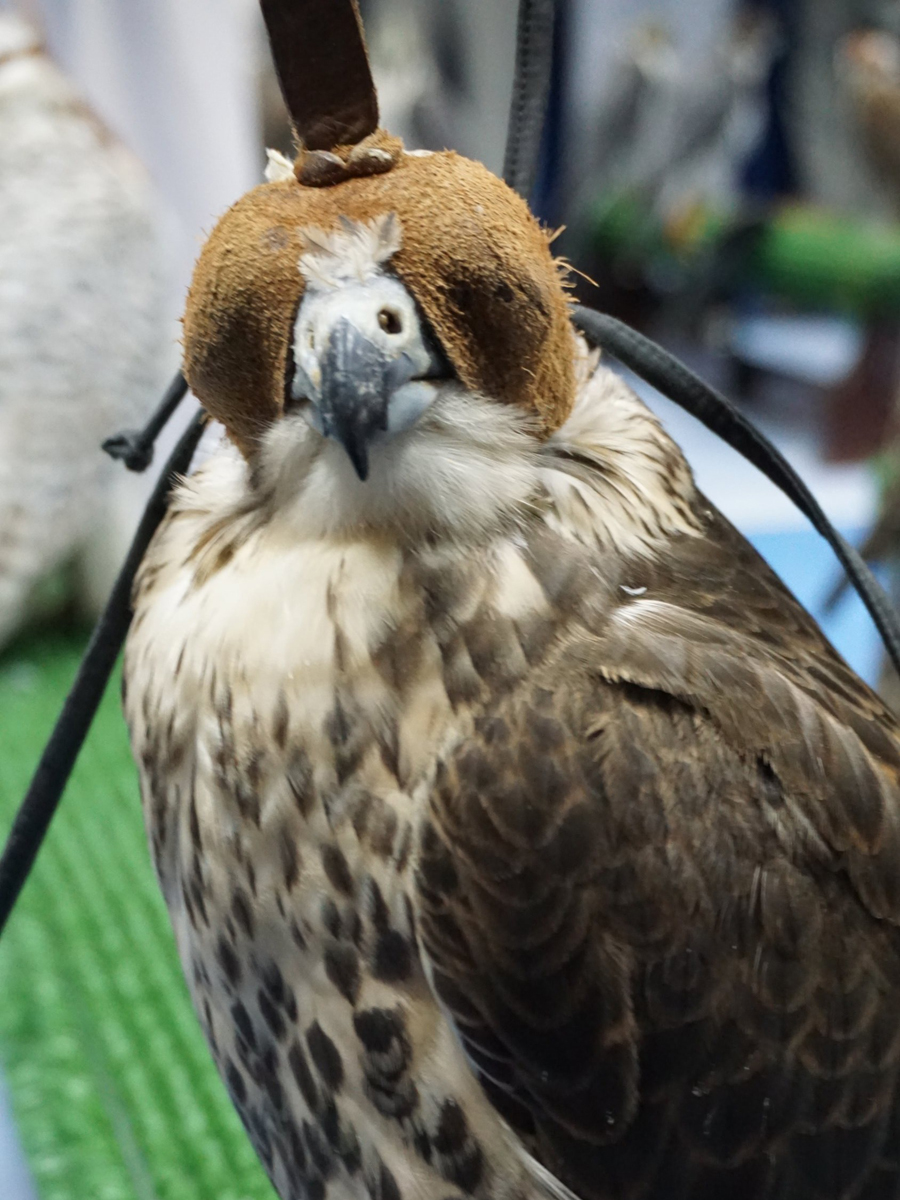 The falcons are blindfolded like Ana from Fifty Shades so that they do not see their surroundings. It prevents them from preying or attacking anyone. They were really obedient blindfolded! 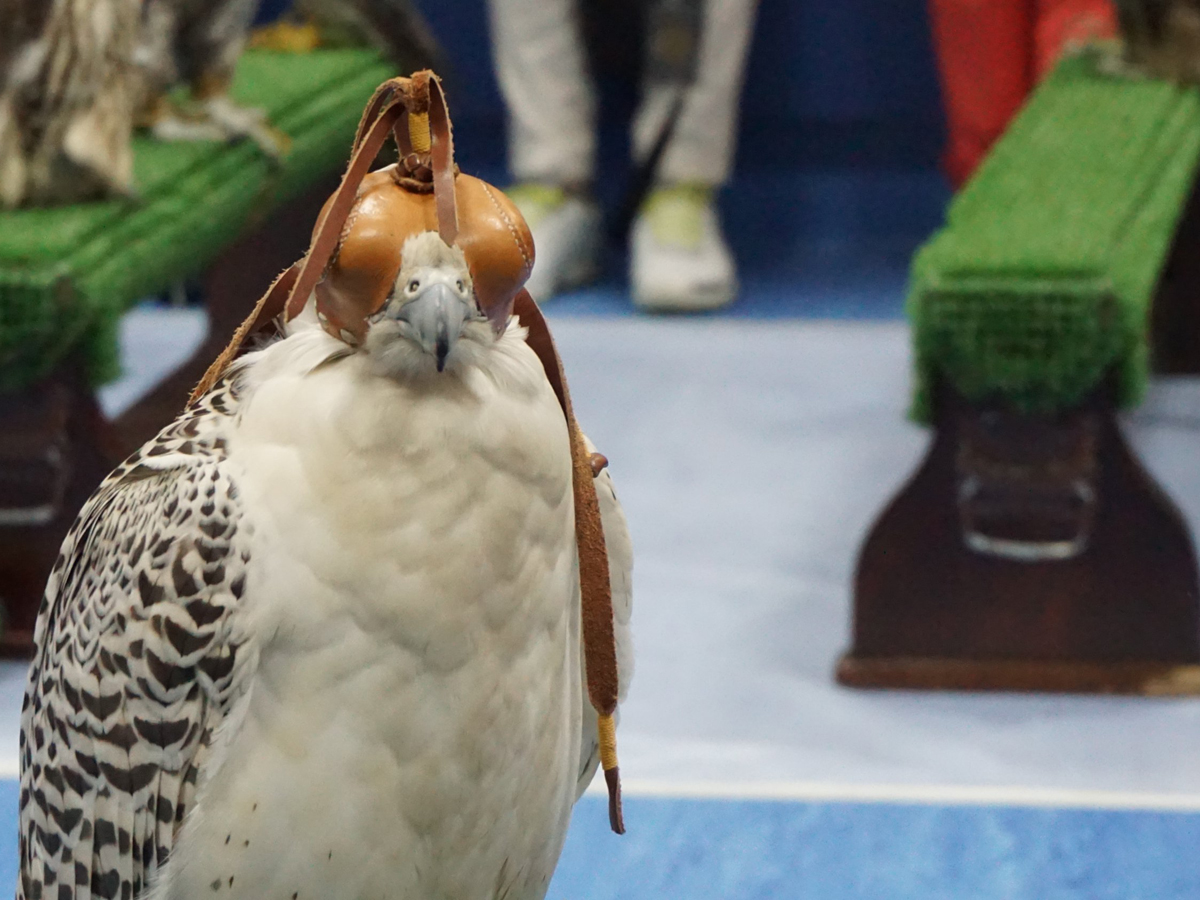 They are really special because every part of their feather is important. They would be vulnerable if any part of it is damaged. From our tour, we learnt that falcons too have feather "extensions" like some of you girls do for your hair! 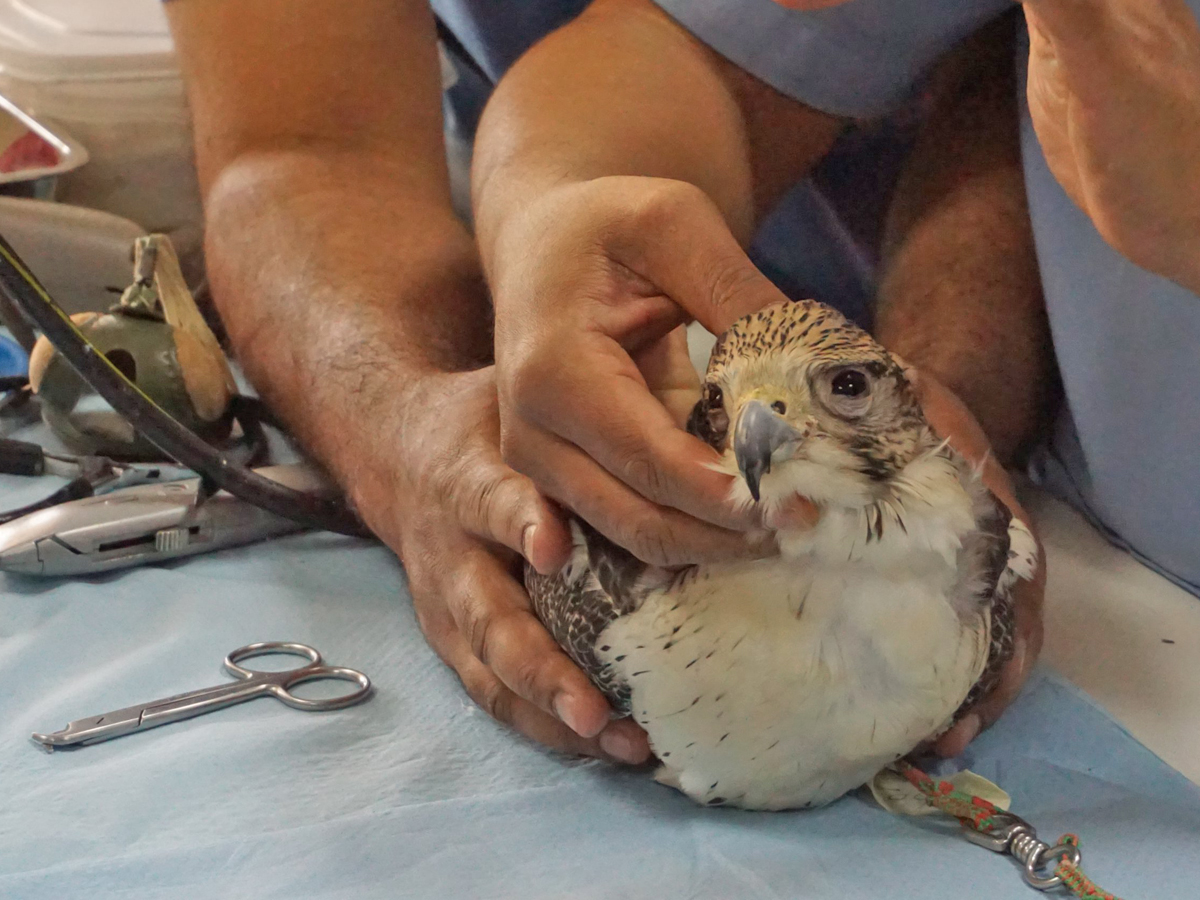 Abu Dhabi Falcon Hospital play spa for these falcons too because as pets (legal in UAE), they need to be maintained but in a way that raises my eyebrow because usually for pets, you would groom them sober. For falcons ironically, they are temporarily put to sleep to be groomed.

So many funny things happened in that hospital. Falcons getting surgery in a real surgery room (with all the surgery light), getting groomed and to see the waiting area for falcons. It's just something new that you would probably laugh about and appreciate. May be dramatic to some!

Animals have a life too!

So after all the grooming, the bird will gain its consciousness slowly. Still needs to be controlled as they may be instinctively violent. 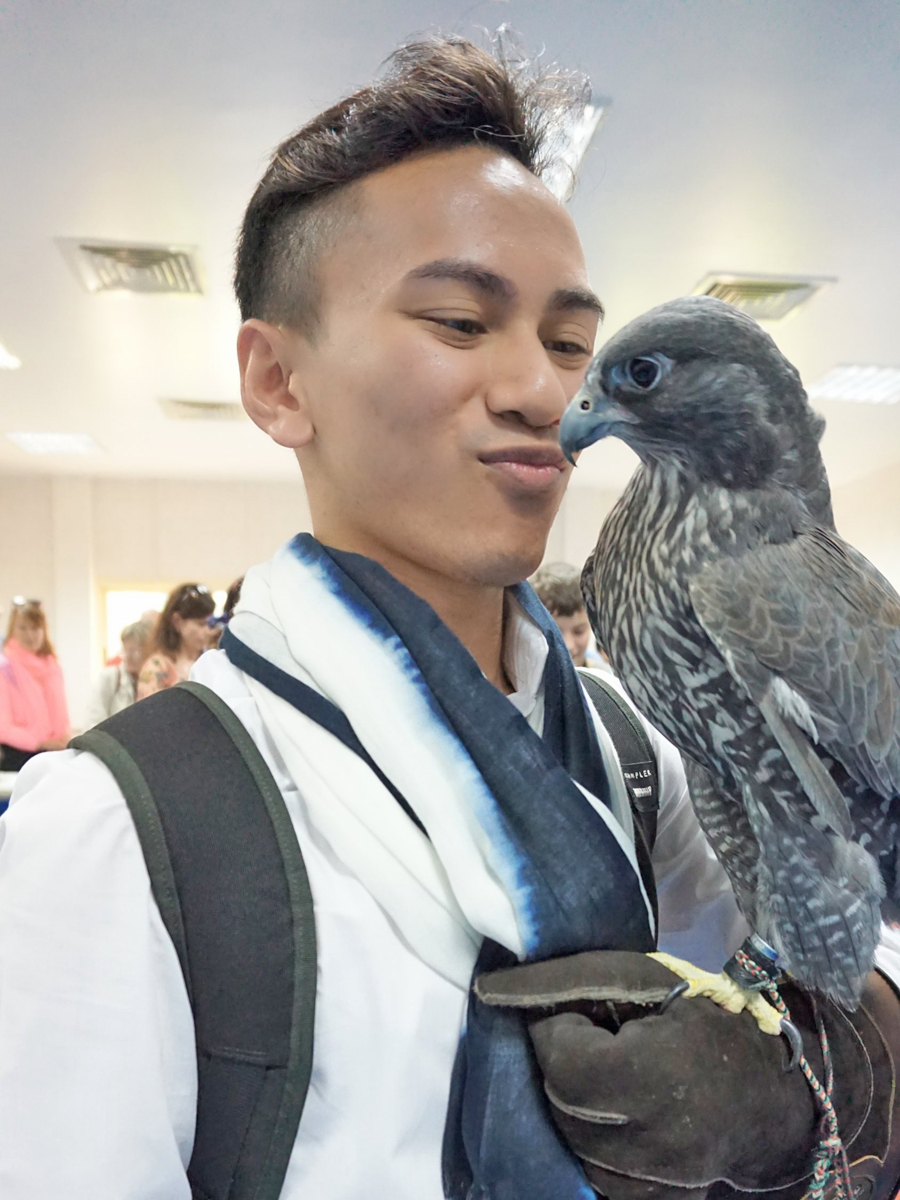 After which you can carry them, and give them a peck! Urgh, it's so cute I feel like bringing one home! Can I please, please have one? 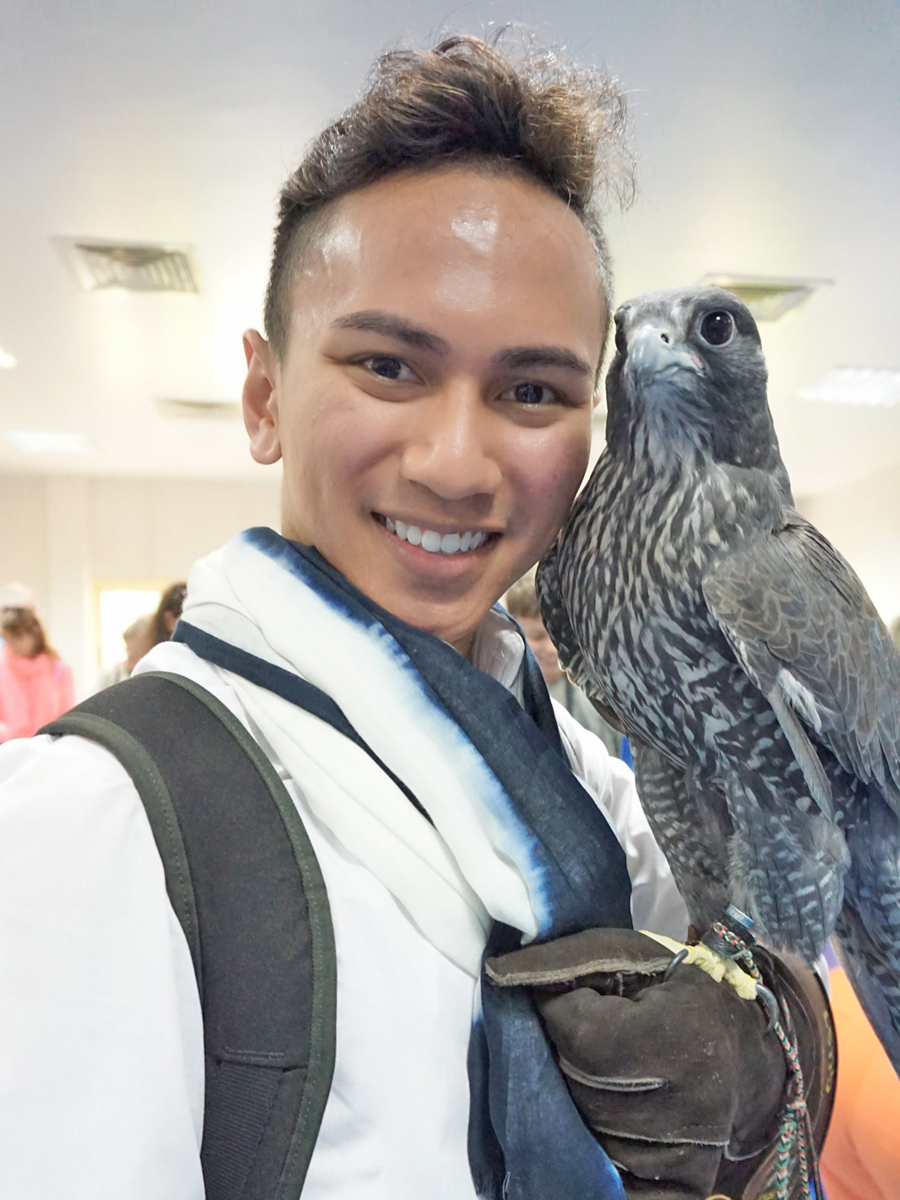 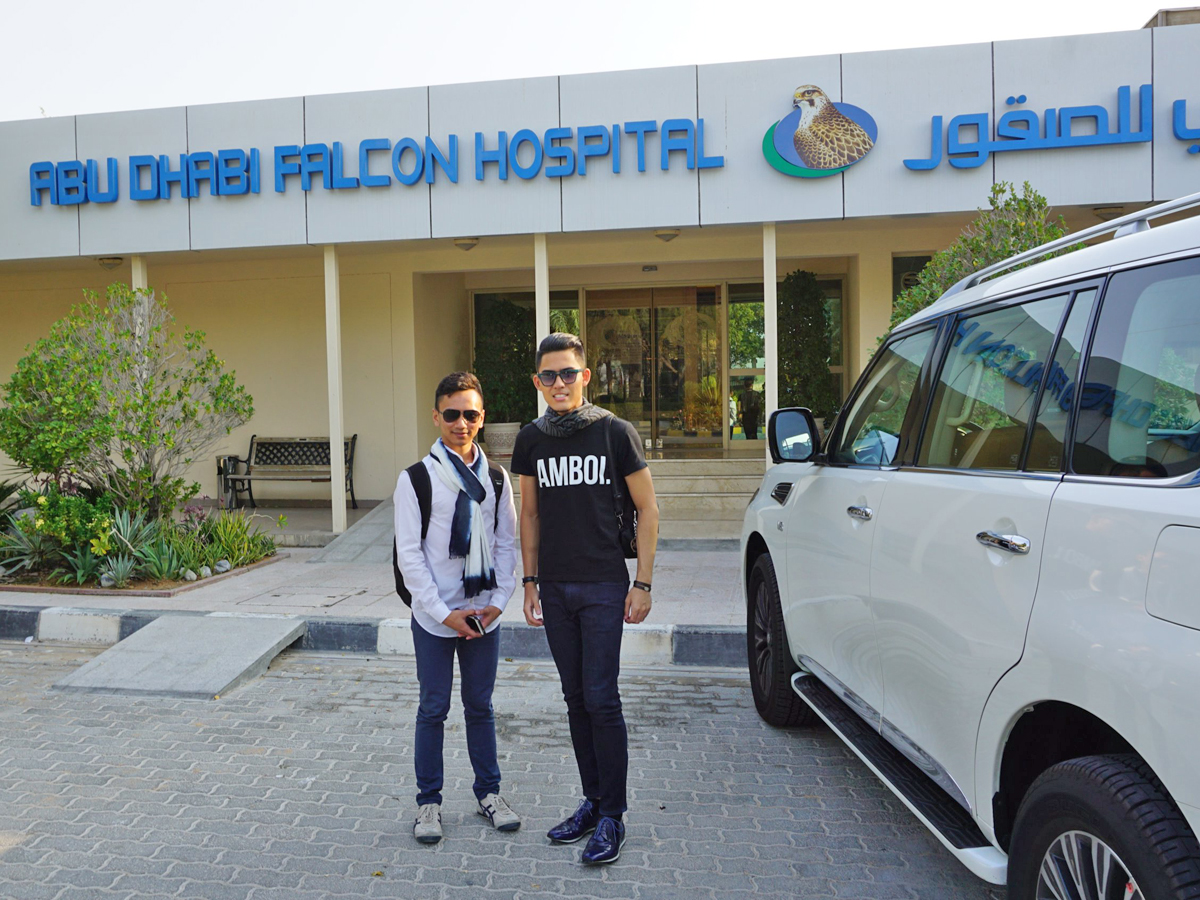 If you are visiting Abu Dhabi, it's definitely a must go. You can make advance bookings here. Get to see falcons up close, if you're lucky you get to feed them, see them getting groomed, and of course, give them a kiss before leaving!

Just remember to note your timing because we were so engrossed with the gigantic mosque, we forgot our tour at falcon hospital. Thank God they were nice enough to help us reschedule! 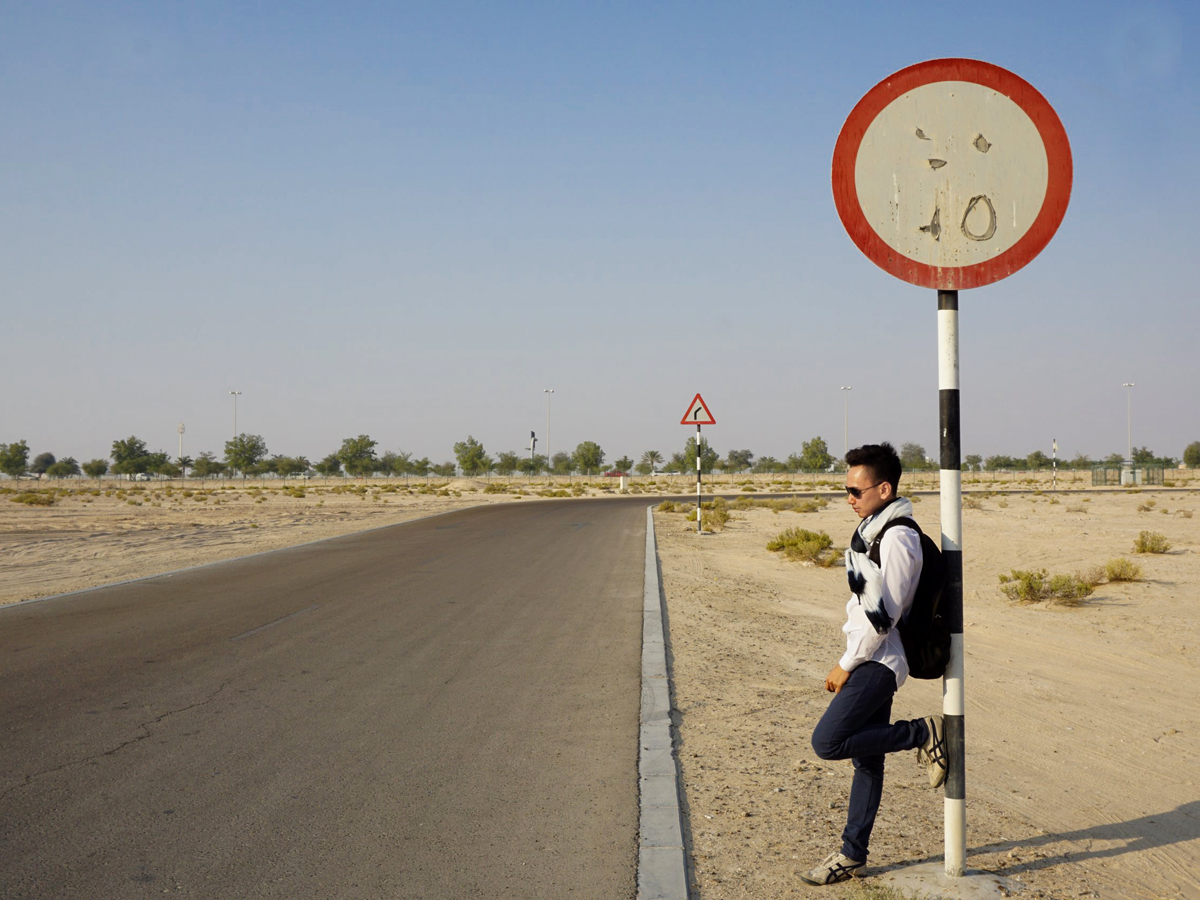 Falcons are so fabulous. Love them!


Abu Dhabi Falcon Hospital
Sweihan Road - Near the Abu Dhabi International Airport
http://www.falconhospital.com
Al-Matbakh Al-Saudi Restaurant (Saudi Kitchen)
Biryani is a famous cuisine in the Arab world. Biryani is not only famous in the Indian world of cuisine, the Gulf variety of biryani is not lack of culture too. When it comes to biryani, there is no other place than the famous Saudi Kitchen - which brand has been patronised by Abu Dhabi royalties too.

Many flocked to this little joint be it locals or tourists because the food is really good! Although the restaurant lacks in ambience in terms of fancy decor, it really brings you back to the early times of Arabian dining. It has this authentic vintage feeling, like you're in the 60's.

To get that old, vintage feeling in Abu Dhabi is not easy at all because everywhere is so modern and poise, so I daresay Saudi Kitchen that I patronised is Abu Dhabi's best kept secret!

The place is really hidden. You have to go up this narrow staircase in Gava Hotel and it does not have a website. If you hadn't read this, you would never know this place exists! 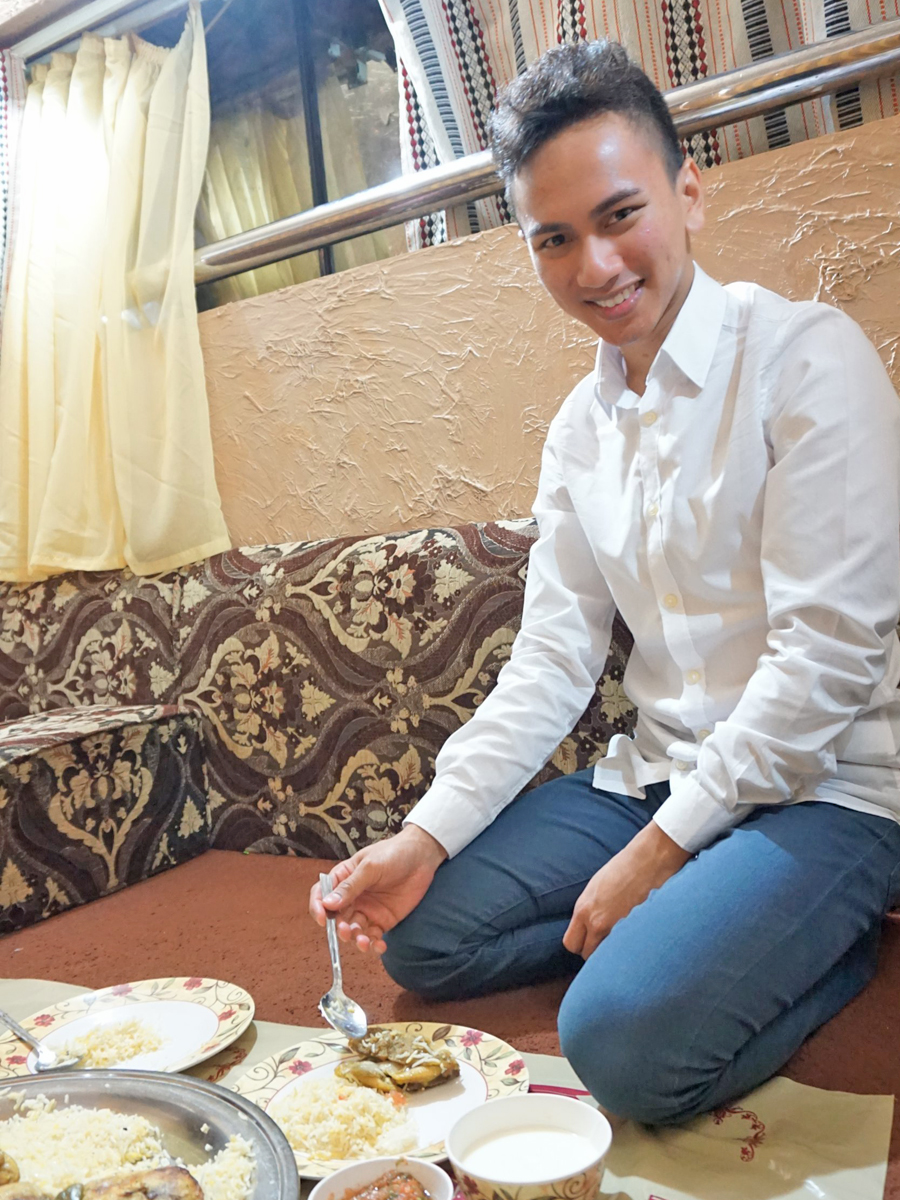 The restaurant has partitions to give a private majlis (assembly) setting. Majlis seating simply means everyone sits on the floor around the food and eat together from the same tray.

The restaurant has many types of biryani and the one you should really try is the mandi bukhari biryani; Saudi Arabian specialty!

The mandi bukhari is a giant portion of deliciously savoury rice topped with the most tender, melt-in-your-mouth pieces of lamb and chicken. The meat it served on the bone and is accompanied by yoghurt and a bowl of watery, but hot, chilli sauce.

It's a much needed meal to keep ourselves warm that day. 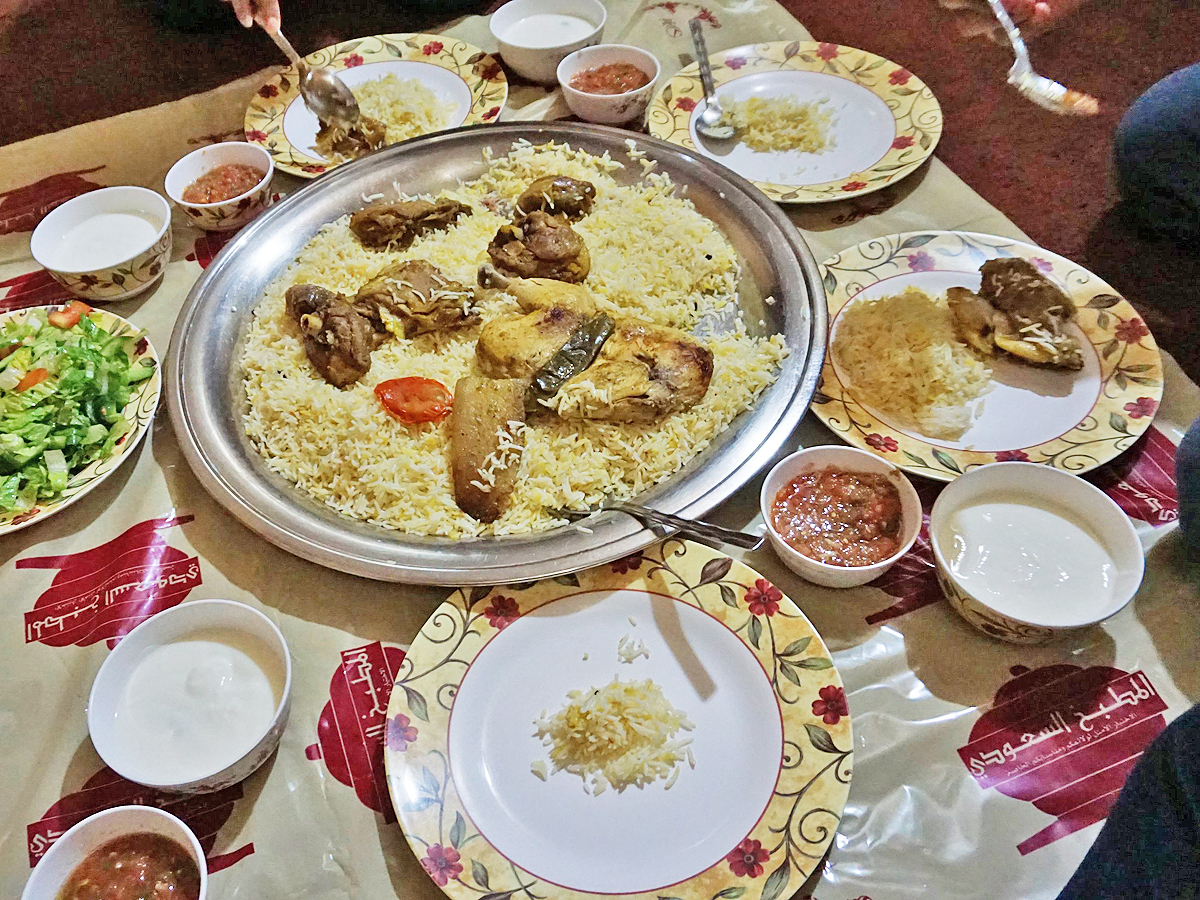 A word of warning though; the portions are really generous. Depending on your appetite, it is safe to order biryani for three if there are four diners (especially for Asians). We really had a lot of leftovers. I wished I was able to stomach it all! Mind you, I was really starving when I was there.

So there you go, Saudi Kitchen - not for the faint hearted! Haha, it ranked 160th place out of a list of 1600 Abu Dhabi restaurants on TripAdvisor. So for an old-fashioned restaurant, it says a lot about how the food makes up for the ambience.


Saudi Kitchen
Gava Hotel
Haza Bin Zayed the 1st Street (Defence Road)
Abu Dhabi - United Arab Emirates
+971-2-6418488
Mina Port
It is unconventional to recommend visiting a port of a modern concrete jungle but yes, their ports are still bustling with life and has always been! 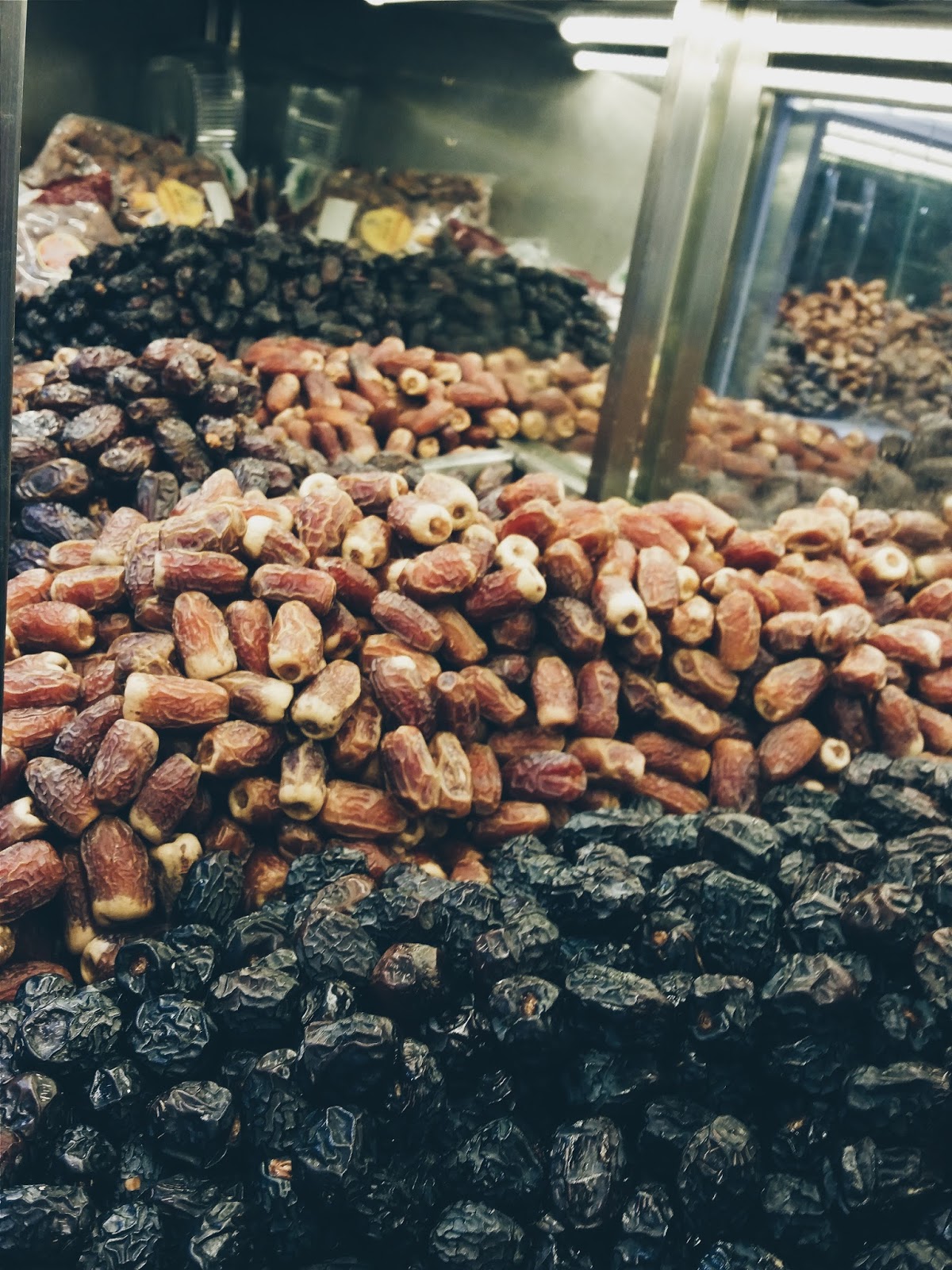 I visited the Mina Port to find out what's there. The port is really huge! To go from one section of the port market to the other side is only convenient by wheel! There they have all sorts of groceries like freshly caught fish, vegetables, carpets, and even dried fruits like the famous dried dates! 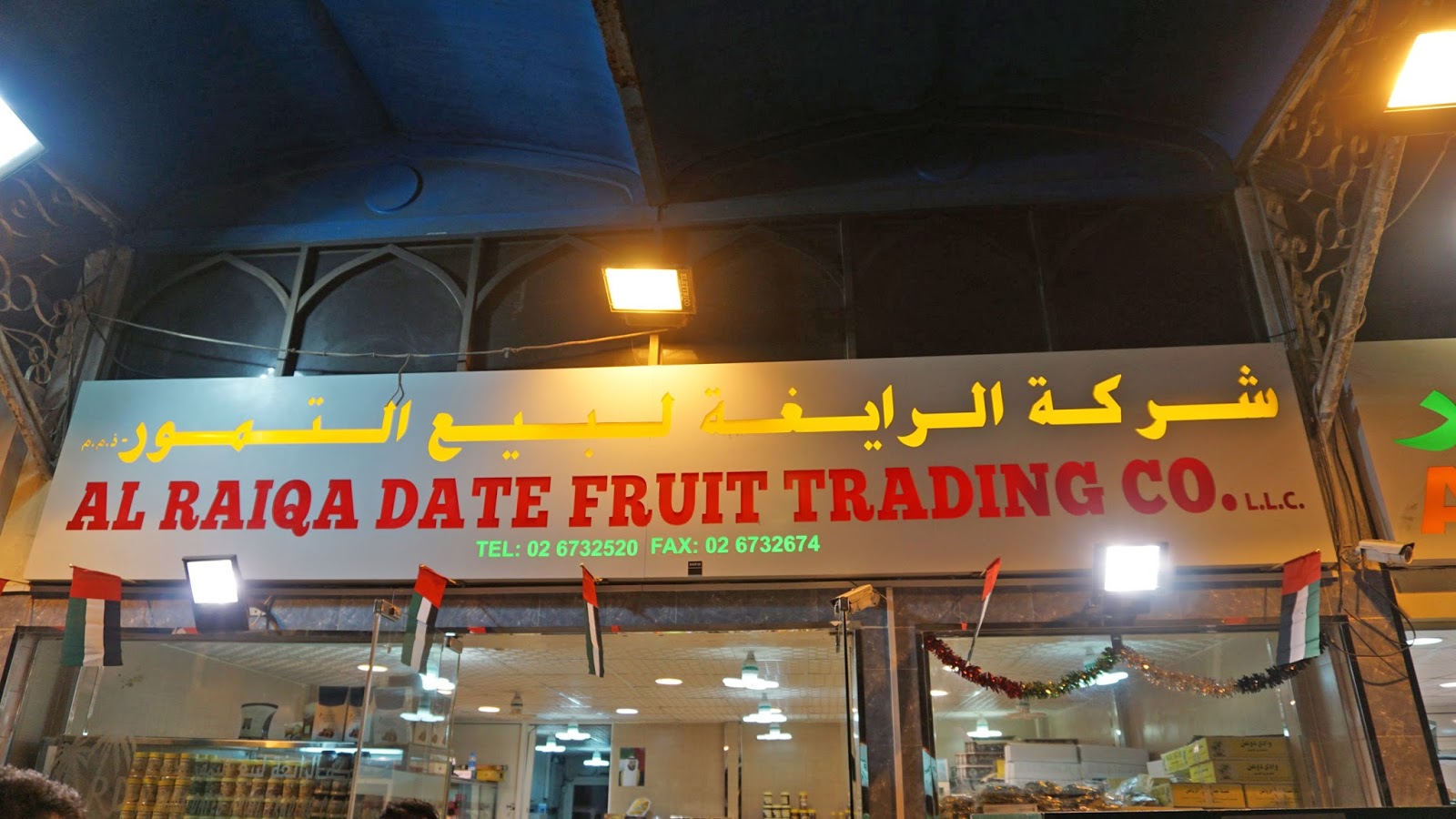 Since I was not done getting souvenirs for my loved ones, I decided to get traditional and all-time popular Arab dates. It's the one special thing that is close to Emiratis heart. Dates are notably popular in the Muslim and Arab world because it has high carbohydrate and fructose that really helps you to get energy for the day. Which explains why it's very popular during fasting month of Ramadan.

The dates and dried fruits section is a must go when visiting the port. Here you will find piles and trays of the finest dates from around the region, in many different product forms! 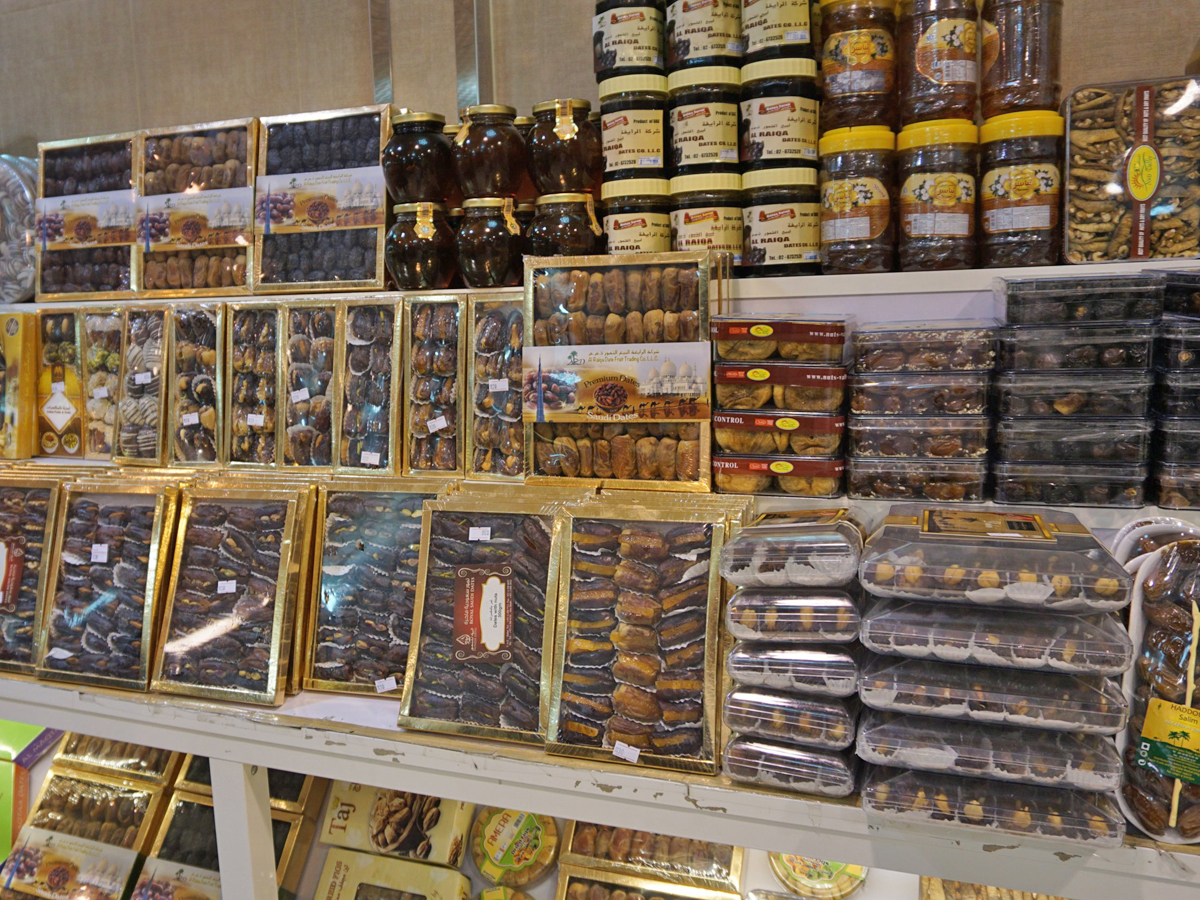 They are usually displayed outside their shops but if you enter, there's more than just dried dates. The Arab world has diversified its date products to more than just that. They have products like date syrup, date juice, date chocolates (really nice), and many more.

Take your time and try everything before you buy. Be warned of sugar rush! Haha! Sometimes you are even offered tea while you're sampling. These goods will be much cheaper and and fresher quality than those sold in the local stores. As usual, bulk purchase gets you the best price! Just don't be rude by being a freeloader!

The Mina Port is one of the jewels of Abu Dhabi for tourists and locals. It's so huge, there is likely enough for you to do for an entire day. So, enjoy the hospitality and the bargaining while you're there!


Al Raiqa Date Fruit Trading Co.
Zayed Port
+971-2-6732520
Cycling By The Corniche
Okay, blame all the fattening food we had. The cheap kebabs we had at the souks, the sumptuous room service, and the massive, massive mandi bukhari we had. We really needed to shake those calories off because I don't want to pay for extra baggage.

I felt really fat, and worst at one point, I even thought I might be obese with all those food fiesta. I have never been fat so I don't really know when's the turning point. They say life starts at 40 and getting fat starts every December. Shrugs. I was just being cautious! 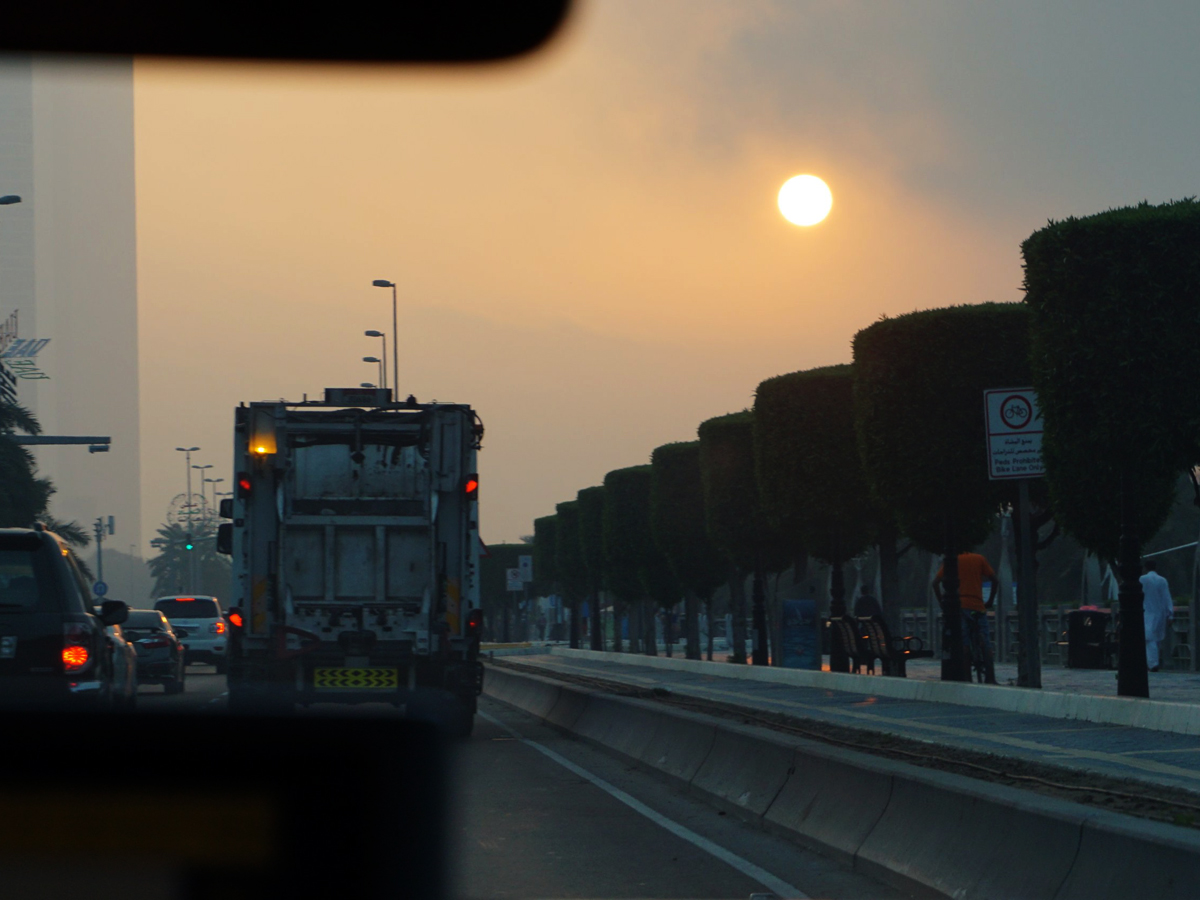 Besides, the weather there was really cold and foggy and we did not sweat a drip throughout our trip so we decided to get ourselves heated up and sweaty by cycling by the corniche called The Corniche (like seriously).

The Corniche extends up to 8km, starting from the port side where the local fishermen dock their boats, and takes in the full length of the Corniche all the way up to Marina Mall. I don't think we completed the full track because I don't remember seeing Marina Mall!

With its awe-inspiring views, the Corniche is one of the oldest landmarks in the city, and regularly being renovated to be a hub for all sorts of active people, as well as those simply looking to get outdoors and soak up the long stretch of scenic seaside trail. 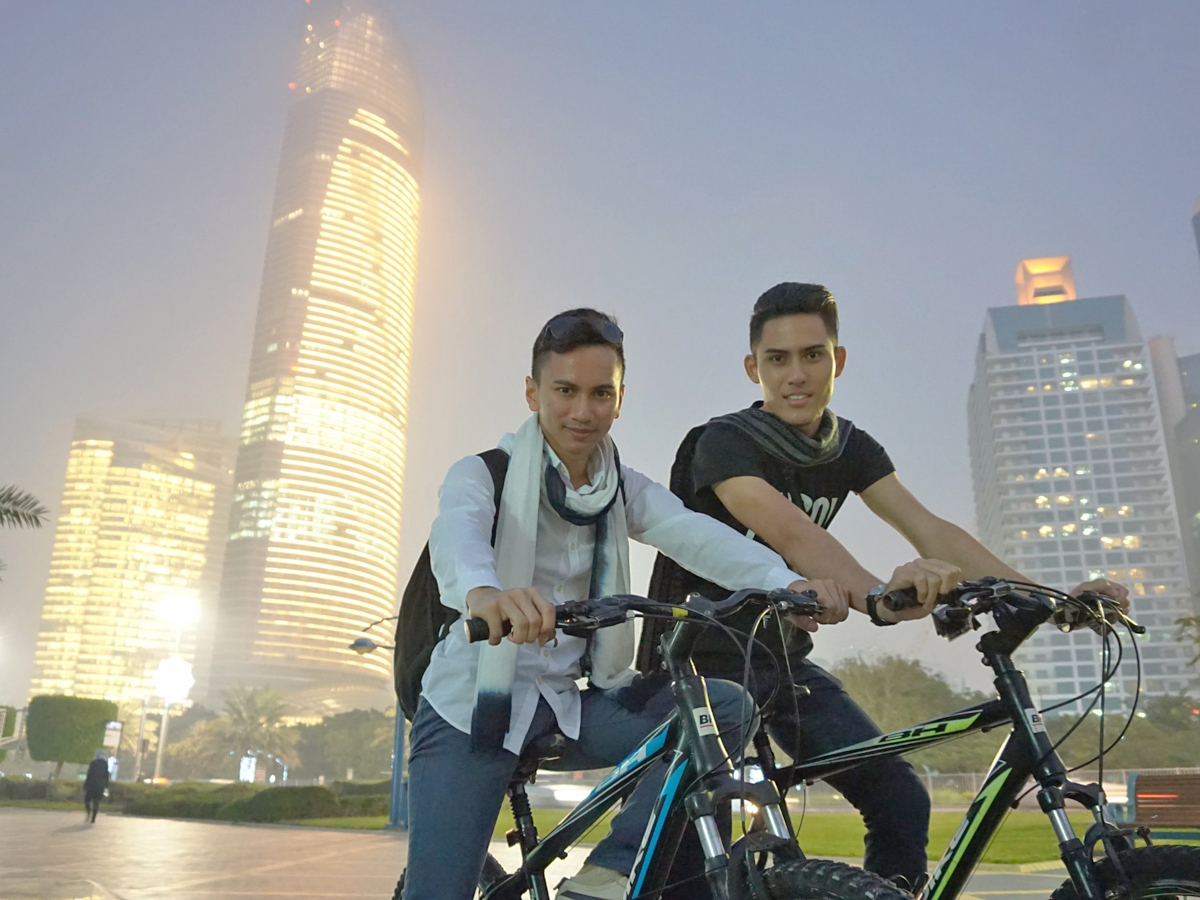 Renting one out is easy, you just need an ID or leave behind a AED100 deposit. Depending on who's the bicycle provider.

Be careful when you're speeding though. As a biker, I like to cycle long distance and fast. Sometimes I go really fast; especially in this cold weather, you don't really feel that tired easily. Almost skidded because the pavement was slippery due to the cold weather and dew.

Don't judge me for being clad in jeans and shirt and a scarf. It was really cold. Even after an hour of speeding through the Corniche, I did not sweat. Not a drip! I was panting though!