Here we are again for the Singapore International Festival of Arts (SIFA), this time spectating Daniel Buren's Circus by Fabien Demuynck. It was amazing, with occasional gasp coming from the audience like myself because up close in such confined space, you get to see everything. Every inch of jerky movement can be seen and yet, it was done effortlessly. We were just afraid they might lose their grip! 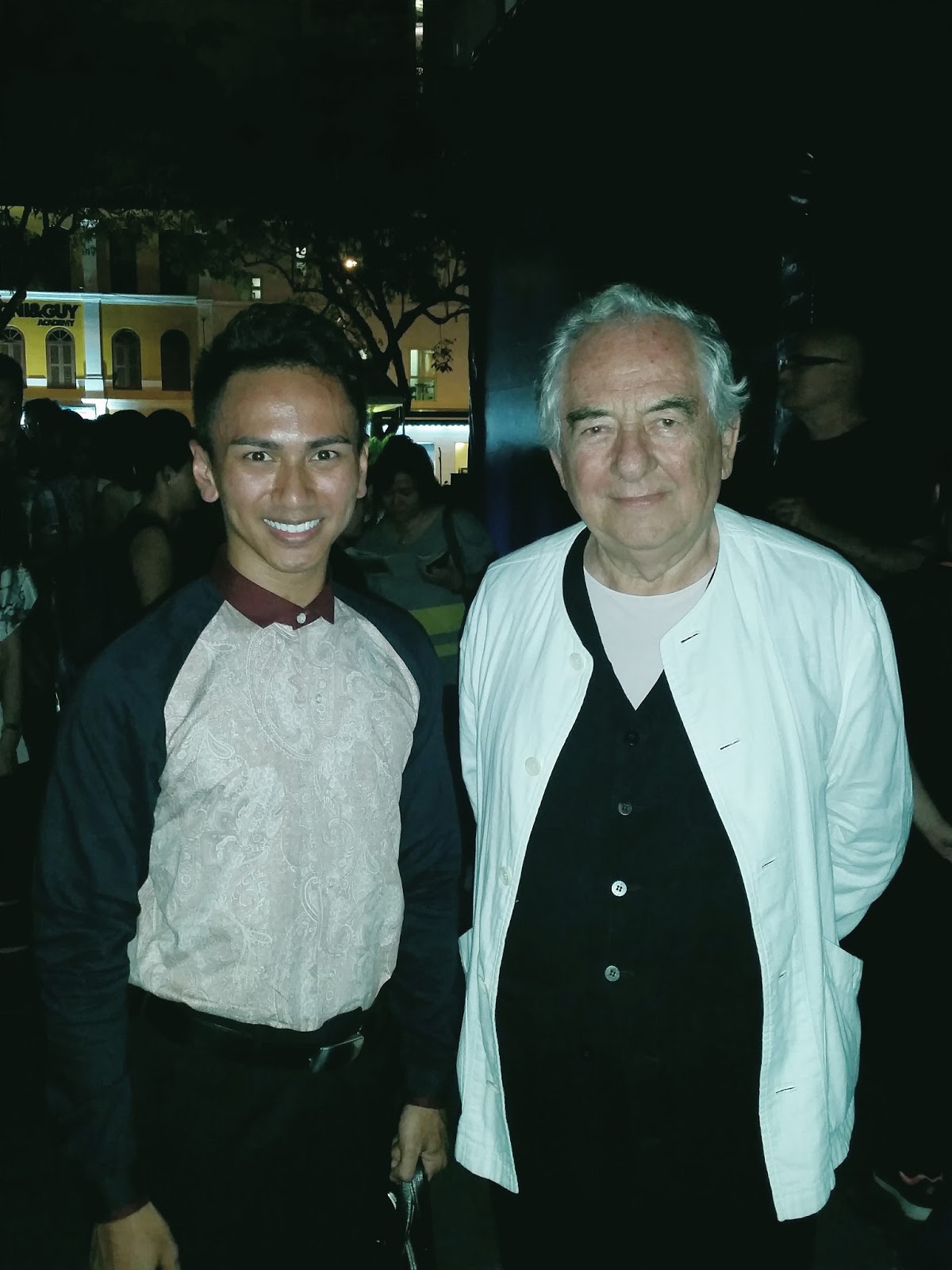 Let me just explain how this show works. It's pretty unique because the concept of rotating circus manifests itself in two ways. Earlier iterations of Cabanons had the artists moving simultaneously from one location to another, creating the impression that the show was running after the spectators. However, now in iterations in 2015, it is us who change places at a strictly defined time. In each cabanon, we experience not only different circus acts, but also the subtle difference in atmosphere under the differently coloured tents. 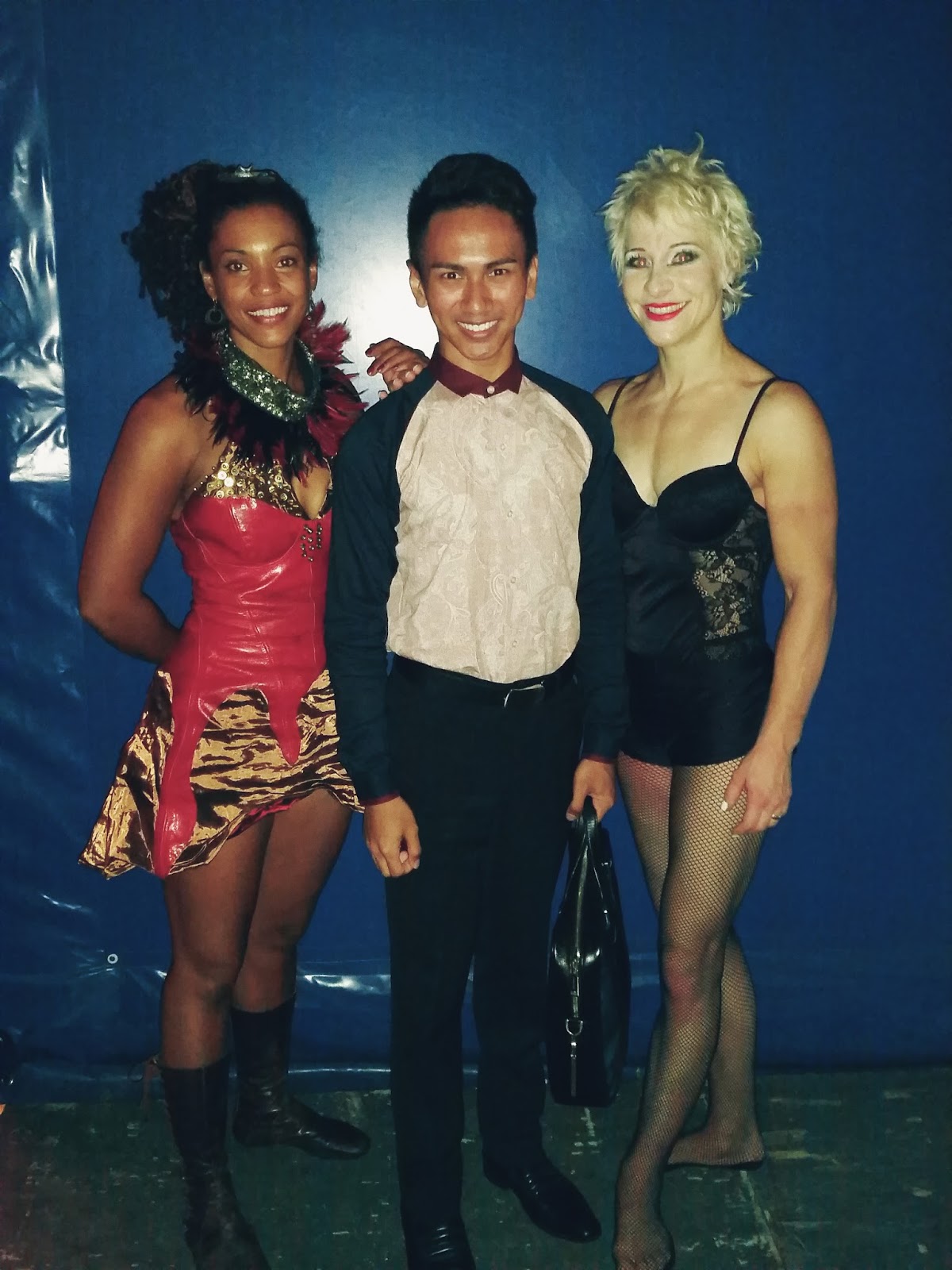 While I was there, I asked myself, what was going on? The entire show has got not much music except from a singer and a n'goni (a ukelele-like string instrument) so it left a lot of room for wonder and interpretation and here were the highlights of what I saw in the first tent that I went.

In the first tent, an African woman (her name is Oumou) donned in her African traditional outfit was standing and across the tent was her male counterpart (his name is Moriba) holding on to the n'goni. He started plucking the n'goni and Oumu started with a song as the spotlight shines on her. It was solemn initially until the n'goni picked up its beat. She danced to the tune and plucked her fingers in beat. 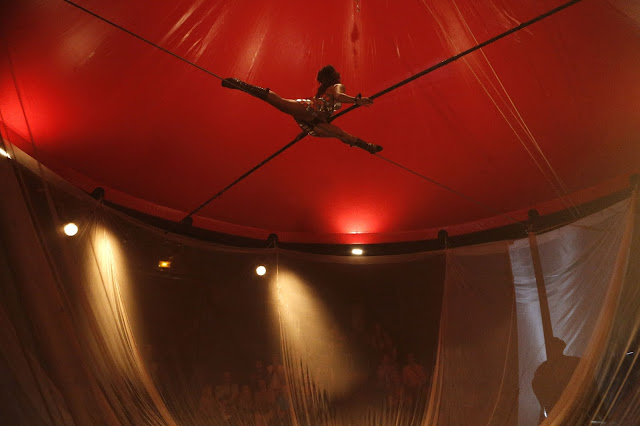 Then, another woman (Tatiana) came in and brought a basket to the middle of the tent. One by one she attached a harnessed string onto the basket that would pull the net up and form a drape. Accessorised in red feathered necklace, her calculated steps seems more grandeur as she slowly pulled herself up to the cable using just a pole like how a fireman would descend. If she had been a firewoman, she would be a sexy one! Within the perimeters of the drape, she hovered over the cable tie on top of her. Throughout her agility on the thin cable, she managed to pull off a smile and rallied us to pluck our fingers together with the thin sounds of n'goni.

She even did an ala cha-cha on the cable, my jaws dropped in amazement yet with fingers crossed she won't miss a step. She even walked backwards fluidly. Oh, and that handstand she did on the cable... If any interpretation has to be made, it would be that life is like walking on cable wire. Strong to hold your weight but dangerous if you slip. Without focus, we would fall and hurt ourselves. To go down from the cable slowly is like ending what you have started, if it has to end, it better end well if not great.

Moving on to the second tent, there were five mirror panels hanged. After everyone was seated, the lights were dimmed and the mirrors started rotating. Technical wise, I am still wondering how the mirror panel rotated itself though because I don't see it being attached to a machine! Or maybe there was but I didn't see it. As it rotate, an acrobat came into the tent with a cyr wheel, rolling it around the spaces between the mirrors. It was as though he was chasing his own reflection. One by one, the mirrors were pushed aside and he started spinning inside the wheel at the centre of the cabanon. 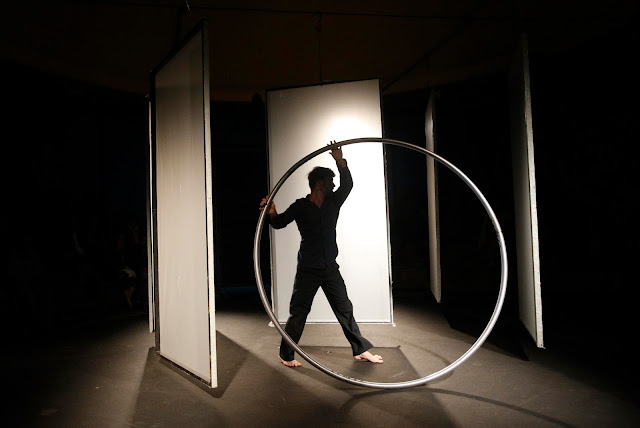 Slowly, he continued spinning using lesser of his upper limb and started tossing and spinning the cyr wheel using just legs. As he took his exit, Moriba came in again with his n'goni and started playing. An aerial silk artist came in and a silky net in the shape of verticle cylinder was gently brought down. In that vertical cylinder was a rope of silk - instrumental to her stunts. Over the cylindrical netting, light that shimmered down as she climbed up towards the light like army's low rope obstacle. 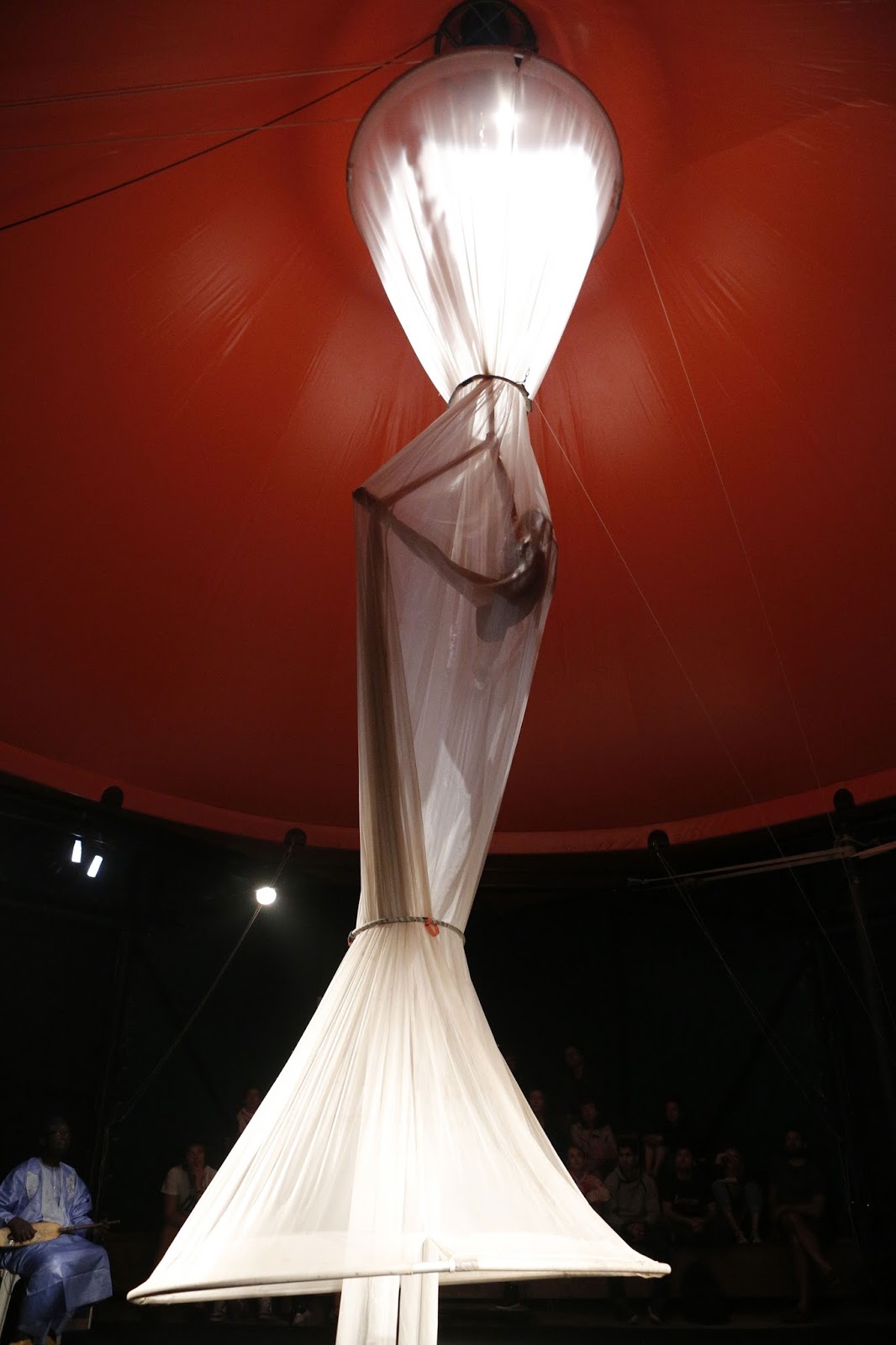 The music got more upbeat as she climbed and hanged tight on top for a while, as though she was desperate to stay up and alive. Smoothly, she twirled the the rope of silk around her different parts of her body and suddenly release herself rolling down and halt to a stop. It's hard to miss people gasping as she did that. Then, Moriba started singing in African without much tune - as though he was chanting something. Throughout, there were instances where she cocooned herself in the silk. I would have assumed the resemblance of a journey being a newborn.

In the final tent we witnessed two acrobats, Sopheak and Sarev. The segment started in a dark kiosk. Two sides of the doors were opened allowing bright light to enter. As it started, the two acrobats joined hands and took a bow as a welcome. Dancing opposite each other, there were tall pickets that were being propped to the middle. While it made me wonder what was it all about, it did not take too long to realize, it takes high precision in balancing to complement each other's ability. The picket was significant in showing a divide between two acrobats not being able to pair up. Does this imply that such divde hinders us from being more productive or collaborative in our life? While the picket allows them to see each other from the other side, does that mean they were actually 'doing something' together'? This is contrasting when they got on to the same side with nothing in between. 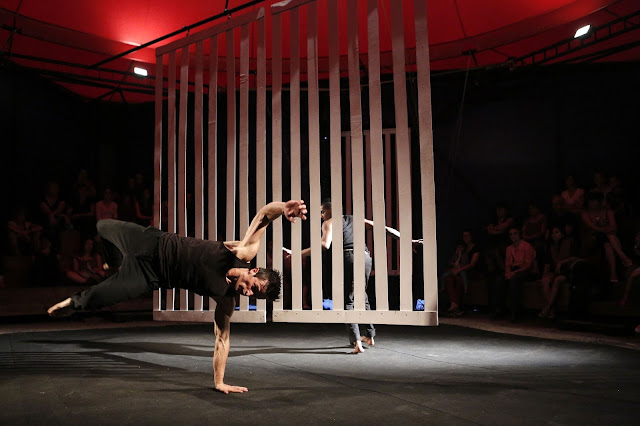 Closing the show was the master of ceremony dressed as a ringmaster fit for a circus show. He summed up by introducing us the artist, Daniel Buren, his art, and his 8.7cm stripe trademark. To find out more about why 8.7cm is his trademark, you can drop by the Drama Centre Black Box today for SIFA Shares. Daniel Buren will be sharing on his past works as well as Cabanons – a magical performance project blending the circus with contemporary art – which made its world premiere in the Singapore International Festival of Arts.

Be emotionally moved by the circus performers, who have to be alive and vulnerable again and again for different audiences. As with Federico Fellini’s legendary film “La Strada”, you will encounter the profound emotions of the circus in Cabanons, where tragedy and joy are intertwined.