Hey all! Gonna spend some time sharing with you the best place for countdown in Dubai because there can be so many things going on there you will be literally spoilt for choice.

Where is the best place to go? Is it the Palm Island partying all night at Atlantis? Or celebration by Burj Al-Arab, one of the most expensive hotels in town? (Taking photos on the beach posing with Al-Arab can be very passe) Or just by the world's tallest building yet; Burj Khalifa? Firework displays are extravagant there at the expense of their oil money so if you think you're not going to visit Dubai for quite some time after that, it's always safe to toast at the most prominent landmark in the city!

Where else if not Downtown Dubai?

We chose Downtown Dubai where Burj Khalifa is for several reasons. The building is so tall I don't really have to worry if I can't see it (especially because I am vertically challenged) and their firework display is always record breaking. We gave Atlantis and Burj Al-Arab a miss because we can't be certain if it was going to be as huge and as hyped as compared to what we were going to watch.

Besides, after all those days exploring the city, I was not really in the mood for hardcore party, neither was I in the mood to stand amongst the crowd and wait for the fireworks to start. I just want to sit, eat, wait peacefully and just enjoy the cosmic edifice that defines the city skyline. 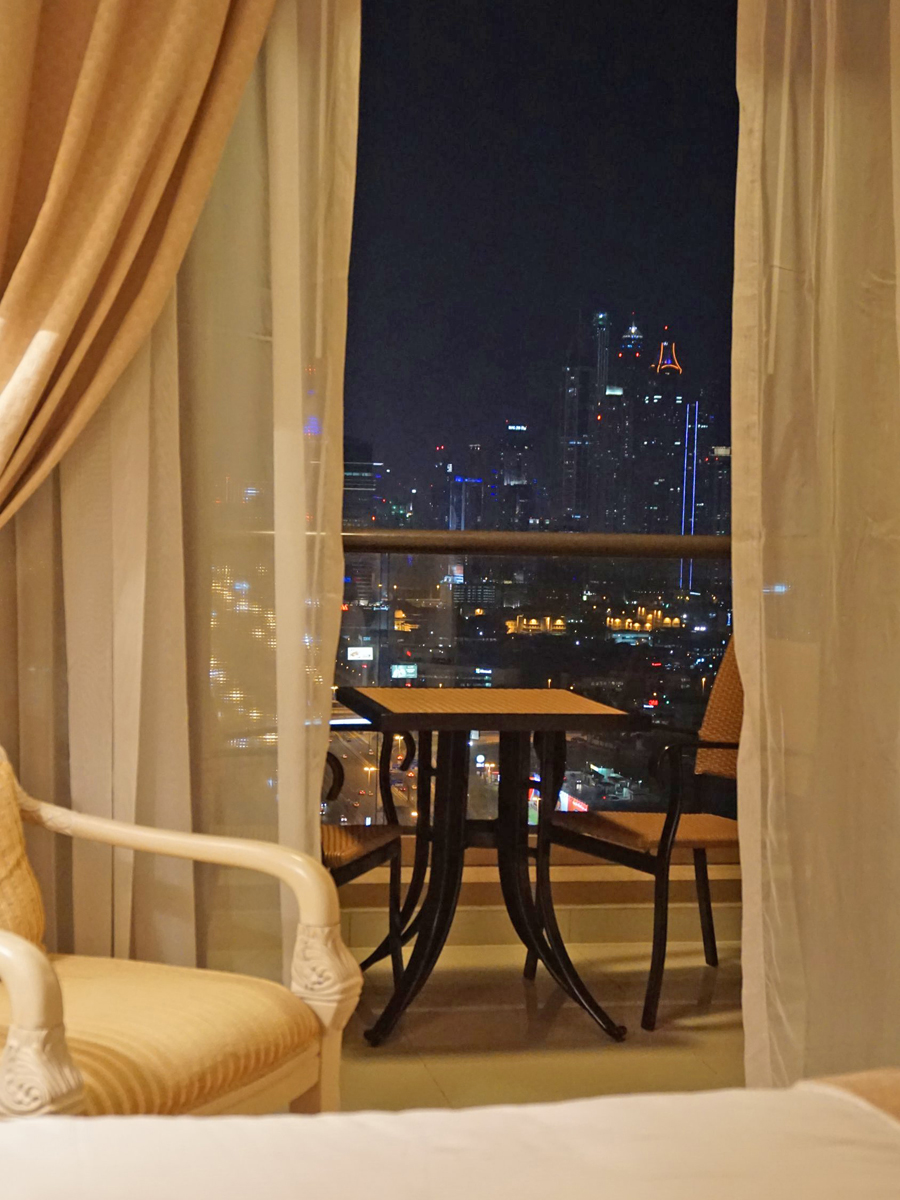 We got back from Abu Dhabi the night before and I was really beat from all the fun I had. I was all excited before the trip but halfway I was so worn out; all I wanted was pizza to be delivered into my room, wash up and sleep!

Although there was a convenience store down at our hotel, I was too tired to even walk to the lift.

I was glad that the following day was countdown, which was one of the most exciting things I wanted to do. I love fireworks! Watching them brighten up the night sky can always make my evening. 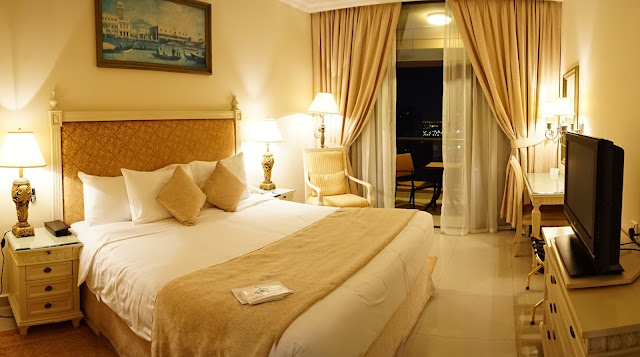 So here's a bit about the hotel I stayed; Yassat Gloria Hotel Apartments. We chose this luxurious hotel apartment because we needed it to be away from all the crowd at Downtown Dubai - knowing how massive it could be, and we needed space to pack our luggages before going home too.

The hotel comes with a kitchen and laundry room which makes it so convenient because first, all the food leftovers can be kept in the fridge and reheated using the microwave and second, I managed to do all my laundry there so that when I come back I don't have much to do. Best of all, it comes with this marvellous refreshing view and from the level I was at, I can see the massive Palm Island (the bridge can be seen in the background on the right of this picture) 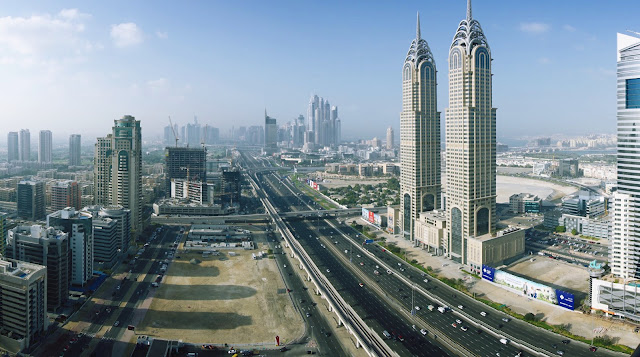 We were really lucky because there was no development going on on the next plot of land, we don't really need the air-con although it can be warm in the afternoon but we were not in. My leg was all wobbly whenever I stood on the balcony. A part of me was grateful for being fun-sized!

So here's me all ready for countdown. My outfit was designed by Hubert Hoon, designer for his label TSHUBIE. What do you think? His exclusive collection here is a collaboration of traditional batik prints on modern piece. It's not easy to pull off batik without looking shabby but he made it work! 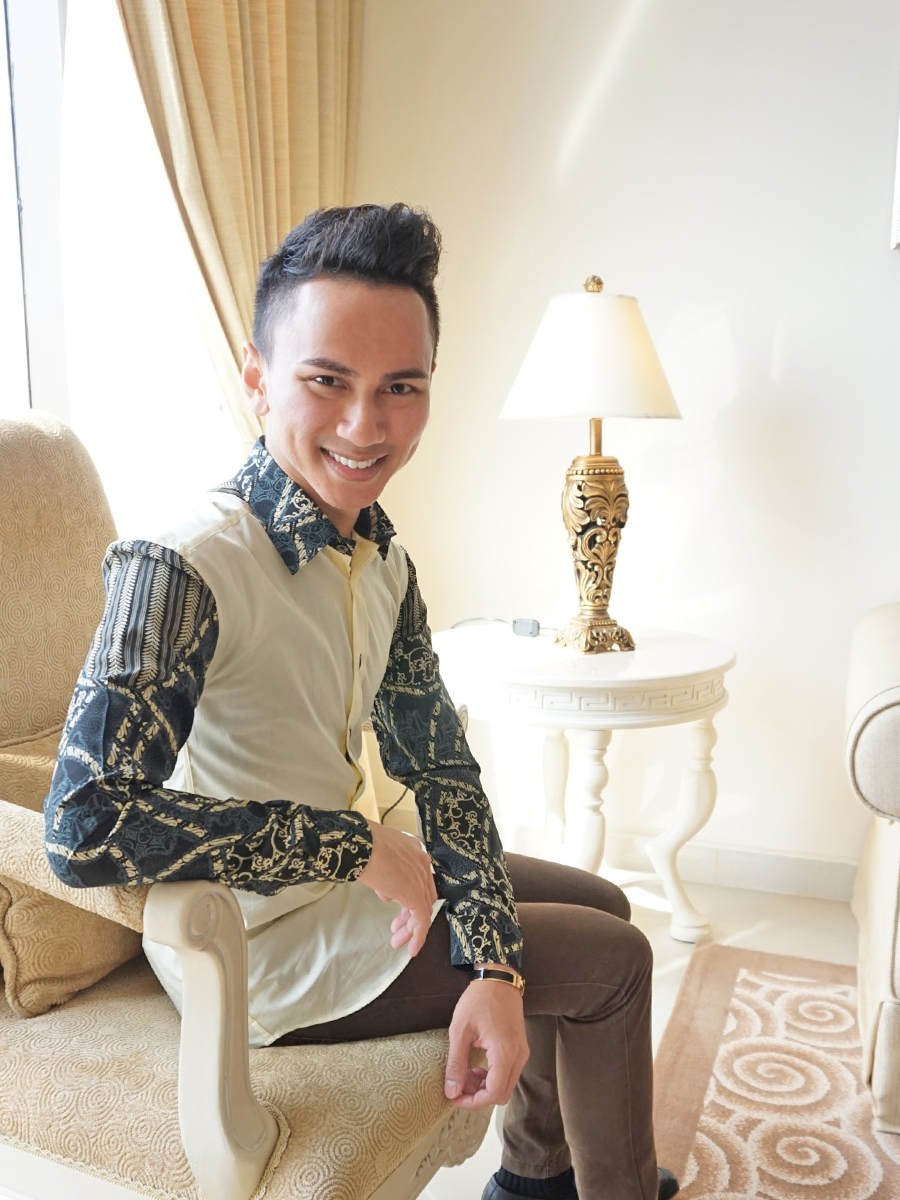 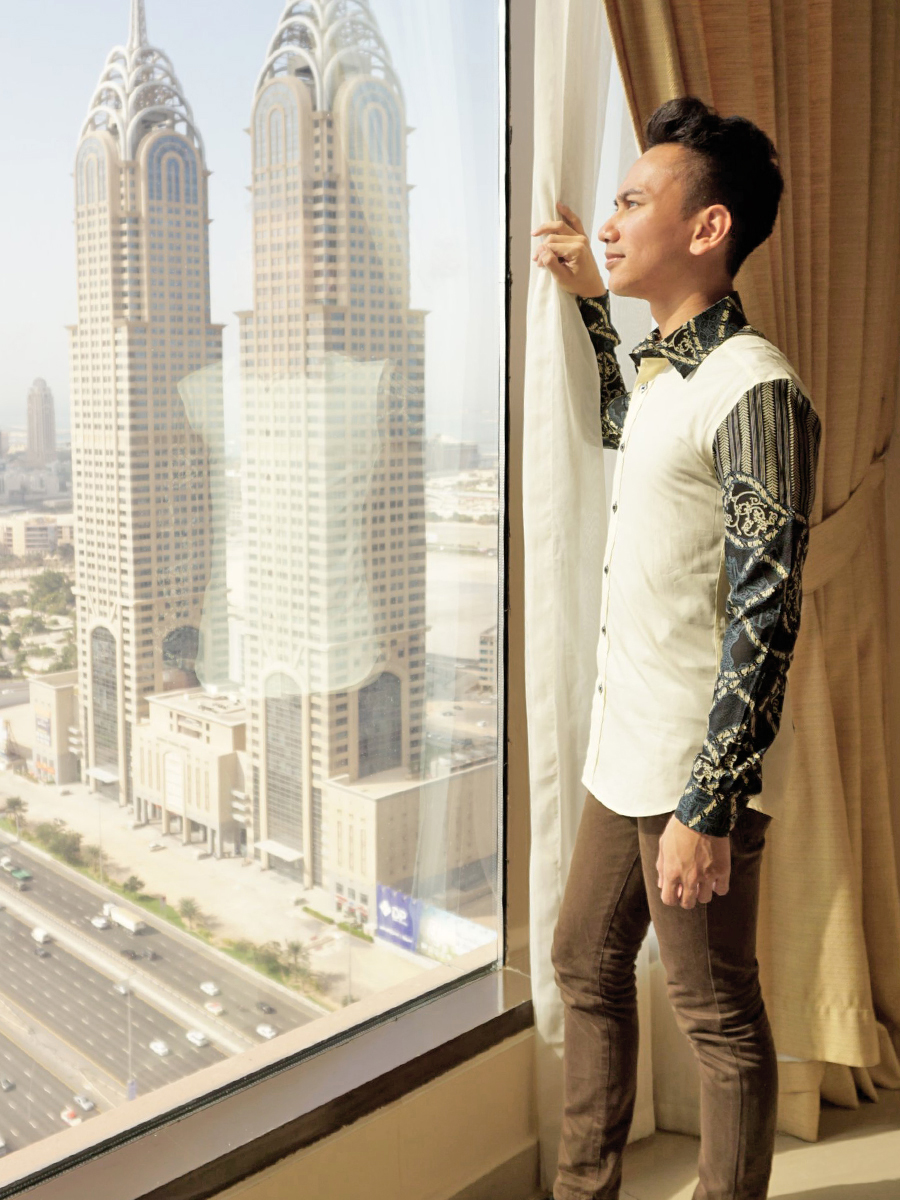 We headed to Downtown early because we were anticipating some major screw ups from all the jam and all but fret not because all the alfresco dining cafes were cordoned off to public, only patrons were allowed to enter. So if you would like to avoid the crowd during countdown, the best way to enjoy the towering fireworks without obstruction is to get a seat at one of these cafes or restaurants. Each offers a different menu ranging from $200-$600 per head, depending on your appetite, and the type of food that you want.

Here's a clue for a wonderful countdown - expensive restaurant does not necessarily mean the best view. I cross my heart! 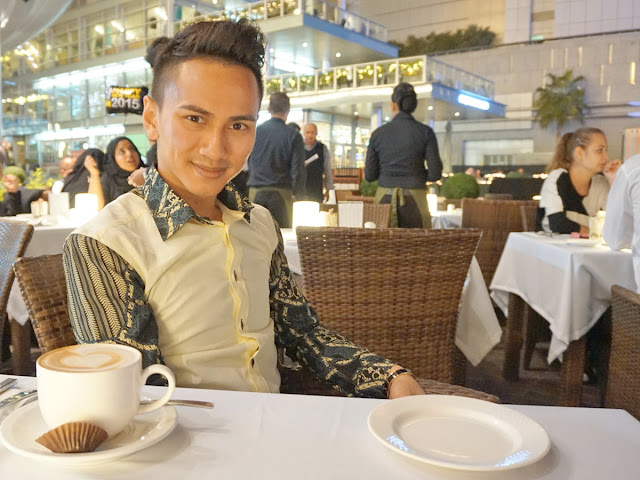 When it comes to revelling in the Dubai Fountain, I even told my friend let's not to spend so much time around Downtown Dubai on other days because on New Year's Eve, we probably saw the entire series of the Dubai Fountain show because it's on the loop from evening till midnight. We sat there, enjoyed our four course meal, indulged in idle banter and the dancing waters from Dubai Fountain. It was so peaceful away from the crowd; the serenity was indescribable until 10 seconds before the clock strikes midnight.

I have never felt so lepak in my life, really. 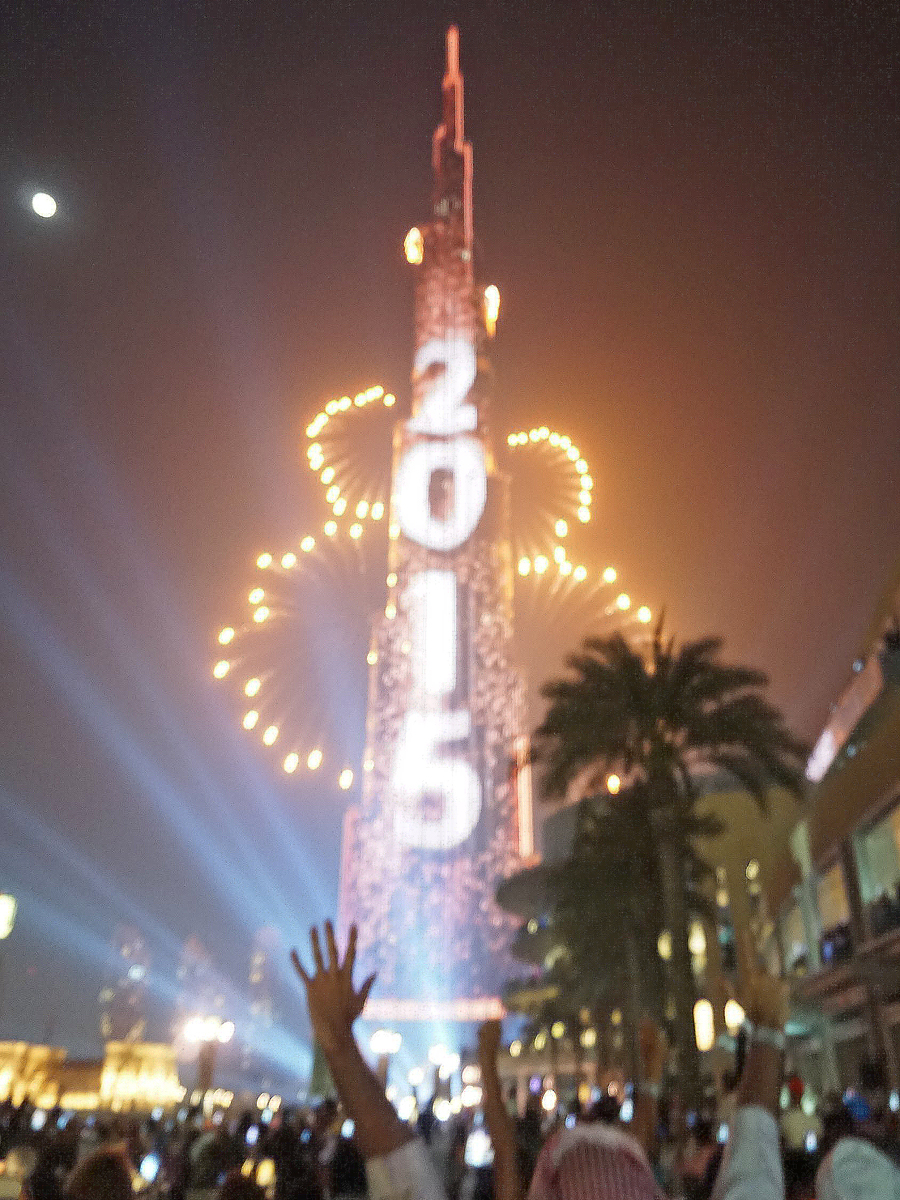 Procession into the new year is important for me because each second of our life should matter. It should be spent doing the things that is significant to us. So I am grateful beyond words to be able to celebrate it there! Some might say new year is just another day. If so, why celebrate birthdays?

The celebration was amazing because at where I was, people were all poise and handshaking and hugs wishing happy new year and on the other side where a hotel was having a party, it was all loud music and booze and then on the other end were a crowd busy popping confettis. I probably saw more parties in one night that in a lifetime then. Haha! 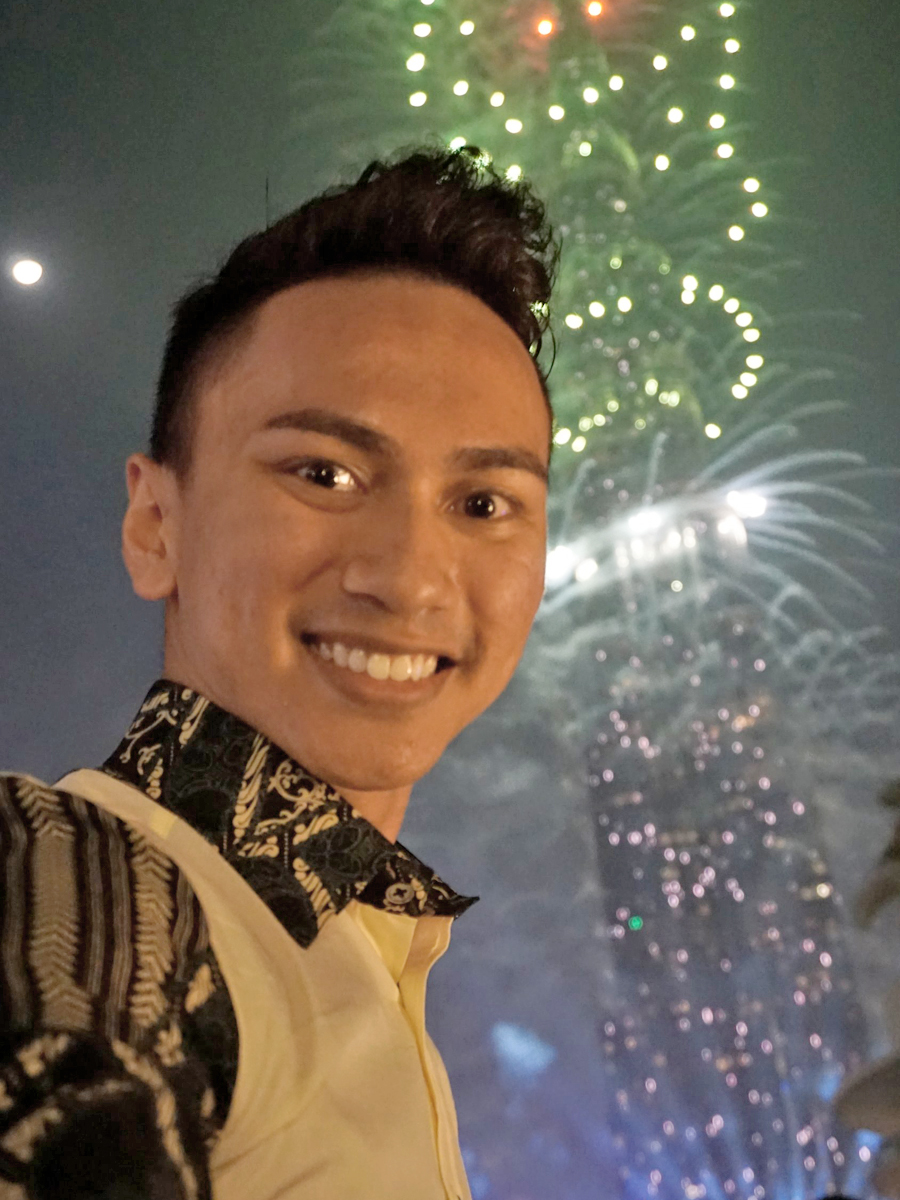 You know what I hate about countdown? The part after it. There were millions of visitors around Downtown Dubai celebrating New Year there it was really hard to get a transport back. The jam was so crazy even cab drivers do not wish to take in passengers, and it takes more than 2 hours to get from one point to another on a short distance.

The best way to get back to our hotel? By foot. Yes, we were that adventurous because on our remaining days in Dubai we wanted to see like, everything. We walked from Downtown to two train stations after, which was close a three hour walk (because we realized half way it was actually very far), almost hitched a ride but we already walked too far to not complete the journey. Yet, we reached before anyone else who travelled by car. That was how massive the crowd was, and that's how bad we want to avoid it. Unfortunately, heli ride wasn't an option.

On of the many #yolo moments was to cross a slip road down a six lane highway. We were not a jaywalker expert, but those Pakistani workers taught us well! Since it was really cold, walking for three hours felt nothing. Not even a drip of sweat!

I was really looking forward to sunrise because I thought I needed to be sunkissed at one of the best beaches in Dubai. Stay tuned and I will talk about that in a bit! Ta! 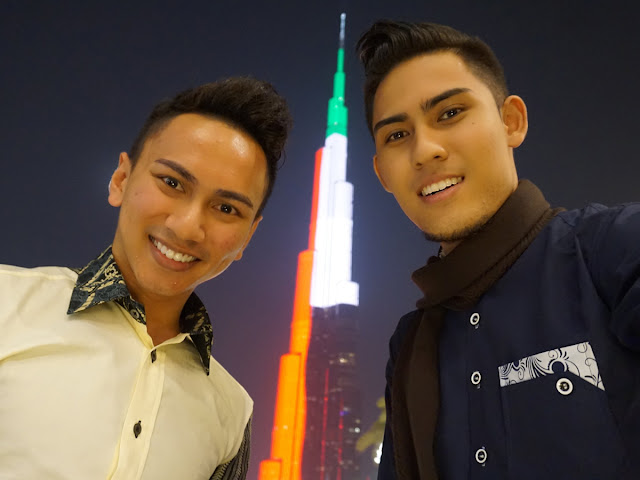