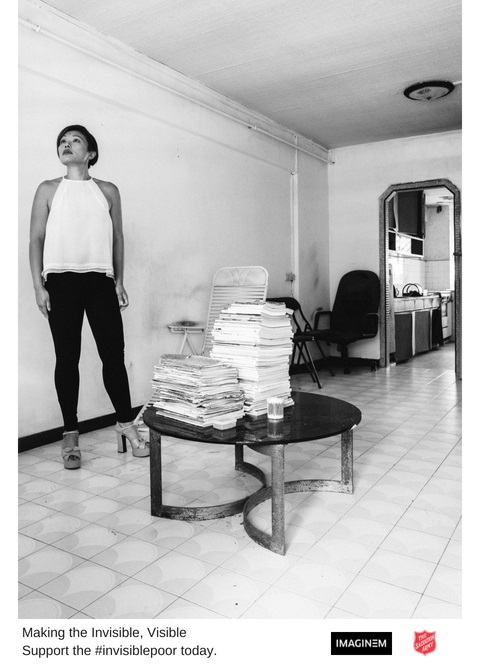 If you have never cast a second look at your void deck where the shabby man spends the night, or a cartload of cardboard and recyclables which the auntie pushes during the day, The Salvation Army hopes to change your mind with its latest campaign “Making the Invisible, Visible”, in partnership with social enterprise imaginem.

The living spaces of beneficiaries with The Salvation Army will be shared by imaginem through black and white photography, whilst personalities are with them on the case. Many a times, they are with us in our neighbourhoods, but look again, the elderly with over-clutter in the flat is in need of basic necessities. Personalities have joined The Salvation Army and imaginem in this campaign, to be with the poor and their spaces in the picture to share about their situation. ACRES founder and Member of Parliament Louis Ng, actress Cynthia Lee MacQuarrie and The Food Bank Singapore co-founder Nichol Ng in the spaces of Singapore’s poor will make you do a double-take.

The campaign is inspired by a similar one by The Salvation Army in Finland last year, which featured Rovio’s Peter Vesterbacka and former Finnish president Tarja Halonen as homeless people. The Finnish campaign won awards for its portrayals, and The Salvation Army hopes to bring the same message to Singapore. It has partnered social startup imaginem to run the photography campaign, with celebrated photographer Aik Beng Chia behind the lens.

The Salvation Army plans to feature several well-known personalities in photographs inspired by the stories of its beneficiaries, and will be rolling out the campaign over a year. The campaign will raise funds to support the poor who have fallen through the cracks via a giving.sg campaign page which can be found here.